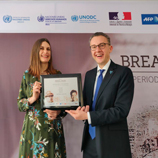 6 June 2019 - In Mexico, almost two thousand clandestine graves have been found between 2006 and 2016, that's almost one grave every two days. This was revealed by a group of journalists in their investigative piece "The country of 2,000 graves", which won the Breach-Valdez Prize for Journalism and Human Rights 2019. This prize is awarded jointly by several organizations, including the United Nations Office on Drugs and Crime (UNODC).

The jury of the contest highlighted the innovative handling and visualization of data, as well as the depth of the text by Alejandra Guillén, Mago Torres, Marcela Turati, David Eads, Erika Lozano, Paloma Robles and Aranzazú Ayala.

Alejandra Guillén, who received the award on behalf of her colleagues from the president of the jury, Griselda Triana, wife of the journalist Javier Valdez, explained that it was a research work of almost two years during which they faced the opacity of government agencies.

"In spite of this, we achieved what we wanted, which was to visualize territorially by year the appearance of clandestine graves in the country. In 2006 there were only two and we documented how it increased year by year and after 12 years of the war on drugs we see how the country is filled with these graves that are the graphic sample of what this war has left," she said when accepting the reward on 3 May 2019. This group of independent journalists conducted fieldwork and data collection over a year and a half to reveal the number of clandestine graves reported by prosecutors in Mexico's 32 states between 2006 and 2016.

According to its authors, the investigation was motivated by the lack of reliable and systematized information on these findings, despite the violence that the country has been experiencing for the past twelve years, when then-President Felipe Calderón (2006-2012) launched the policy of war against drug trafficking, prolonged by his successor, former President Enrique Peña Nieto (2012-2018).

The work also showed that the authorities do not have a shared methodology for documenting and reporting the findings of clandestine graves, which makes it difficult to seek truth and justice. The result of the investigation has helped families, organizations and forensic teams searching for missing persons to demand official information from prosecutors. In addition, it has become a very useful basis for explaining the effects of the policy of war on drug trafficking.

The award ceremony for the 2019 Breach/Valdez Prize for Journalism and Human Rights was held within the framework of World Press Freedom Day at the House of France of the French Embassy in Mexico. The Prize seeks to recognize the committed, innovative and rigorous work carried out by Mexican journalists to provide accurate data and make visible the serious human rights problems that afflict the country.

Mexico is considered the most dangerous country in the world without a war situation to practice journalism. Its numbers of journalists killed place it virtually on par with Afghanistan and 99 per cent of the murders go unpunished. It has been documented that these crimes almost always affect journalists who investigate drug trafficking and corruption of authorities.

The Breach-Valdez Prize for Journalism and Human Rights was first awarded in 2018 and emerged as a tribute to the renowned journalists Miroslava Breach and Javier Valdez, killed in 2017, whose names have become a symbol of the urgency to protect media professionals and allow them to do their work independently. The Breach-Valdez award recognizes the careers of journalists who stand out for their work on human rights issues in Mexico and who risk their lives daily to play their role in keeping society truthfully informed.