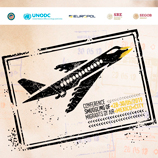 13 June 2019 - More than 150 participants from the justice, customs, migration and police sectors as well as airlines and airports from the Americas and Europe, gathered in Mexico City from 28 to 30 May to discuss trends, routes, challenges and lessons learned in preventing and combating the smuggling of migrants by air. The event was held in the framework of the SOMMEX (smuggling of migrants Mexico) initiative.

The United Nations Office on Drugs and Crime (UNODC), in partnership with the European Police Office EUROPOL and with the support of the Secretariats of Foreign Affairs and the Interior of Mexico, organized the first meeting on the continent exclusively devoted to addressing this particular way of trafficking.

During the three days of the conference a series of representative cases were presented. These confirmed once again that smuggling of migrants by air is a business operated by organized crime that makes unscrupulous use of the world's busiest airports - as well as other clandestine airports - to transport tens of thousands of irregular migrants each year. The airlines and the cooperation among them and with airport authorities is decisive in preventing new cases.

Antonino De Leo, UNODC Representative in Mexico, said that "timely and coordinated intervention prior to boarding is key to preventing migrants in vulnerable situations from undertaking a journey without return or being exposed to situations of helplessness at the airport of destination due to the lack of adequate documentation."

The speakers at the Conference agreed that the smuggling of migrants by air is sustained by a large black market of false identity documents that generates millions of dollars in profits for criminal organizations. For example, some Asian migrants pay up to USD 75,000 per person to travel to North America by air. Faced with this great challenge, speakers recommended that countries acquire the latest interactive biometric technology to shield their points of entry and exit.

"A dealer may sell you a false identity but not the security of reaching your destination," reads one of the spots of the #DeadlyBusiness campaign against the smuggling of migrants, explained UNODC Public Information Officer Felipe De La Torre Corral at the conference. The campaign has been adopted by 13 countries and has reached around 20 million people through social media, traditional media and various events.

Through events like the Conference and the #DeadlyBusiness campaign, UNODC is contributing to the implementation of Sustainable Development Goals 16 and 17 (peace, justice and strong institutions, and partnerships for the goals, respectively).

The event was made possible by a financial contribution from the International Narcotics and Law Enforcement Affairs Office. At the closing ceremony, the EUROPOL representative, Álvaro Rodríguez Gaya, acknowledged the work of UNODC in Mexico and indicated that the conclusions of the conference will be relayed to the European Commission.

United Nations Office on Drugs and Crime for Mexico, Central America and the Caribbean