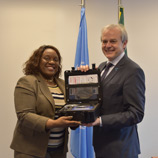 Vienna, 15 March 2019 - The United Nations Office on Drugs and Crime (UNODC) officially donated an on-site drug testing device to Jamaica on 14 March as part of its effort to counter the threat of synthetic drugs in Latin America and the Caribbean.

The device was presented to Cheryl Spencer, Ambassador and Permanent Representative of Jamaica by Jean-Luc Lemahieu, UNODC Director of the Division for Policy Analysis and Public Affairs on the margins of the Commission on Narcotic Drugs.

"Jamaica regards this support to the country through this device as not only a tangible demonstration of international cooperation but also as technology transfer, elements which are critical to the development of small developing countries like Jamaica," said Ms. Spencer.

Mr. Lemahieu noted that synthetic drugs and new psychoactive substances are emerging rapidly, including in Latin America and the Caribbean. He said that "UNODC supports countries in the region through quality assurance programmes for forensic laboratories, forensic capacity building workshops and the provision of modern technology to identify toxic new substances early on to protect people's health in the region."

In the past ten years, 14 countries and territories in Latin America and Caribbean have reported 178 different new psychoactive substances (NPS) belonging to diverse chemical groups. In 2017 alone, 61 different NPS were reported to UNODC by nine countries in the region. Evidence also suggests a growth in consumption of "ecstasy" and new psychoactive substances mimicking its effects among secondary school and university students.

These developments present a serious threat to global public health and pose unprecedented challenges for policy makers and law enforcement institutions on national and international levels.  Challenges exist both in terms of detection and identification of the growing number of synthetic drugs, and also regarding treatment and prevention.

These issues can be aggravated by the lack of adequate detection and identification technology and the lack of technical capacities of law enforcement officers and forensic drug analysts, especially when dealing with a constantly fluctuating array of NPS and unknown substances never encountered before.

To address this situation, the UNODC Global Synthetic Monitoring: Analyses, Reporting and Trends (SMART) Programme has trained 60 front line law enforcement officers, forensic drug analysts and custom officers from 16 countries in Latin America and the Caribbean on safe handling and identification of drugs and precursors. The participants also received training on the use of handheld Raman spectrometers to be able to test unknown samples, suspected narcotics, psychotropic substances, precursor chemicals as well as cutting agents, directly in the field.

Within this framework, UNODC is donating two of these handheld Raman spectrometers to each of the beneficiary countries, which will allow them to identify a substance in various forms such as powders, crystals, tablets, capsules and liquids, with one quick scan. Beneficiary countries are the Bahamas, Barbados, Bolivia, Chile, Costa Rica, Dominican Republic, Ecuador, El Salvador, Jamaica, Guatemala, Guyana, Mexico, Panama, Peru, Saint Lucia, Suriname, Trinidad and Tobago.

Global SMART Newsletter for Latin America and the Caribbean Issue No. 3 ( Spanish)

62 nd Session of the Commission on Narcotic Drugs