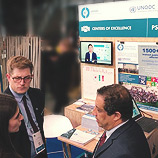 Paris (France), 20 November 2019 - The Centers of Excellence of the United Nations Office on Drugs and Crime (UNODC), which strengthen countries' statistical, analytical and monitoring capacities in the fields of crime, government, victimization, public security and justice, participated in the second edition of the Paris Peace Forum from 11 to 13 November 2019.

The Centers were selected as one of the 120 global projects that had the opportunity to interact with around 7,000 people that attended the Forum, together with representatives from 140 countries and 13 Heads of state.

It was a high-impact event, bringing together leaders such as the Presidents of France and the Democratic Republic of Congo, Emmanuel Macron and Félix Tshisekedi, the Vice-President of the People's Republic of China Wang Qishan, United Nations Secretary-General Antonio Guterres and the President-elect of the European Commission Ursula von der Leyen.

During the Paris Peace Forum, the staff of the Centers of Excellence engaged directly with over 150 Civil Society Organizations, Researchers, Member States Representatives and Students to advocate about the need for having better data as a first step towards designing effective public policies that enable people to live in peace and security in their communities.

Speaking at the pitch of the Centers of Excellence, Salomé Flores, Coordinator of the Centre of Excellence of Mexico, presented UNODC's vision to support Member States from improving their crime and criminal justice statistics, highlighting that data is the only way to understand trends, identify priorities and target policies accordingly. She stated that statistics are essential to inform policy and the importance of considering the community as a key element to develop citizen driven data.

UNODC has two Centers of Excellence for Statistical Information on Government, Public Security, Victimization and Justice in the world: the first was founded together with the National Institute of Statistics and Geography of Mexico (INEGI) and covers the region of Latin America and the Caribbean.

The second recently opened jointly with Statistics Korea (KOSTAT) and covers the Asia Pacific region and is based in Korea. Its creation follows up on the Road map to improve the quality and availability of crime statistics at the national and international levels endorsed by the United Nations Statistical Commission (UNSC) and the Commission on Crime Prevention and Criminal Justice (CCPCJ).