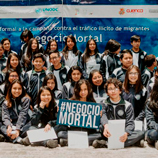 Cuenca (Ecuador), 4 October 2019 - The Government of Ecuador officially adopted the #DeadlyBusiness campaign against migrant smuggling, an initiative of the United Nations Office on Drugs and Crime (UNODC), on 1 October. The campaign aims at informing migrants about the risks involved in hiring smugglers to leave their countries of origin in an irregular manner. By joining this project, Ecuador is taking an important step towards the implementation of the "Global Compact for Safe, Orderly and Regular Migration".

The formal launch event took place at the former Central School of the city of Cuenca. The event was hosted by the Representative of UNODC for Ecuador and Peru, Kristian Hölge; the Mayor of Cuenca, Pedro Renán Palacios; the Undersecretary for Citizens' Security, Diego Tipán; the Vice Minister of Human Mobility, Carlos Alberto Velastegui and the Vice Minister of Health Governance, Carmen Guerrero. More than 150 representatives of the National Government, authorities of the provinces of Azuay and Cañar, members of civil society, the media and students attended.

According to data provided by the Registry System for Victims of Human Trafficking and the Smuggling of Migrants, managed by the Ministry of Government, 63 per cent of Ecuadorian migrants come from Azuay and Cañar and pay between 12 and 20 thousand dollars to traffickers to reach the United States of America. The latest UNODC Global Study on the Smuggling of Migrants shows that 58 per cent of migrant deaths occurred on maritime routes and 19 per cent due to extreme conditions of heat strokes and dehydration, mainly in desert locations.

"Launching this campaign in Cuenca is not a coincidence" stated Mr. Hölge. "The Austro-Ecuadorian region has high rates of migrant outflows and there have been disturbing recent incidents of smuggled migrants from these provinces in Mexico." He said that the #DeadlyBusiness campaign aims to sensitize the authorities to counter illegal trafficking and protect these populations.

Mr. Palacios announced that Cuenca is committed to the dissemination of the #DeadlyBusiness campaign and thus contribute to this effort to expose the abuse and exploitation to which migrants are subjected when they make use of the smuggler's "services".

Felipe De La Torre, UNODC Public Information Officer, pointed out that the vast profits from smuggling are used to buy weapons, install clandestine drug processing laboratories, corrupt public officers and finance armed conflicts that impoverish the communities. "Those same conflicts that force people to leave their homes and seek other horizons", he concluded while presenting the #DeadlyBusiness communication materials, which include videos, radio spots and posters.

This campaign was developed by the UNODC Mexico Office in 2015. Because of its universal scope, #DeadlyBusiness has been adopted by several countries in the Americas and Spain; originally designed in Spanish, it has been translated into Arabic, French, English and Portuguese. It has reached more than 19 million people through social media, traditional communication channels and activations in 13 countries.

#DeadlyBusiness contributes to the implementation of the Sustainable Development Goals (SDGs) 5 on Gender Equality, 8 on Decent Work and Economic Growth, 10 on Reduced Inequalities, 16 on Peace, Justice and Strong Institutions and 17 on Partnerships.