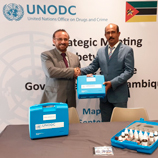 These constructive discussions led to the Maputo Roadmap, a strategic roadmap focusing on specific areas of policy development and technical assistance related to the priorities of the Government of Mozambique in strengthening its criminal justice system, which are in line with the priorities set by the Southern African Development Community (SADC) and the UN Sustainable Development Goals.

Speaking at the opening ceremony of this strategic meeting between UNODC and several representatives of the Government of Mozambique, Pedro Comissário, Director of the National Drug Control Agency, and Cesar Guedes, UNODC Representative for Mozambique, highlighted the need for a comprehensive approach addressing the challenges faced by law enforcement and justice systems in Mozambique.

As highlighted by Mr. Guedes, heroin trafficking is for example a major cause of concern in Mozambique. In the past few years, provinces in the coastal region have become entry and/or exit points for illicit goods, such as drugs arriving along the Southern Route from Afghanistan as well as wildlife items. Following improvements in maritime law enforcement capabilities in neighbouring Tanzania and Kenya, recent seizures suggest that the volume of illicit products being trafficked via Mozambique is increasing. In this respect, the three countries are now joining efforts and have recently launched a Trilateral Strategy supported by UNODC's Global Maritime Crime Programme.

Mr. Comissário warned that "having large amounts of drugs trafficked through SADC countries also increases the risk of accessibility for local populations, especially the youth, which can become a health risk, especially in some of the poorer regions".

Regarding the Mozambican Government's initiative to strengthen the fight against drug trafficking, Mrs. Akisheva added: "We are also very pleased with the direction taken by Mozambique towards reforming national drug policy in coordination with SADC countries. UNODC will continue to support the Government in fostering regional cooperation".

"Criminals and terrorists alike exploit weaknesses in borders and in enforcement generally, particularly in the northern province of Cabo Delgado to raise funds, plan and mobilize criminal and violent activities", cautioned M. Karimipour.

As such, Cabo Delgado province, recently affected by cyclone Kenneth, so-called terrorist groups have increased the intensity of attacks. These challenges threaten peace and stability in Mozambique and could lead to wider regional security implications in view of Mozambique's key location along the Southern Route.

"UNODC stands ready to provide further assistance to the Government of Mozambique to prevent and counter crime and terrorism in line with international conventions and norms", added M. Karimipour.

The issue of wildlife and forest crimes was also discussed during the meeting. Given the challenges facing its criminal justice system, Mozambique has been a target of transnational organized crime syndicates looking to exploit its rich biodiversity.

"Trafficking in wild fauna and flora, along with the crimes in the fisheries value chain, steal Mozambique's natural resources and prevent it from earning valuable income which should be used to support social and economic development in communities that depend on natural resources for a living. Wildlife and forest crime is a major funding source: in Eastern and Southern Africa, criminal groups make billions of dollars annually and this constitutes a large part of the $90 billion a year that is generated from transnational organized crime in the region collectively", said Jorge Eduardo Rios, who leads UNODC's efforts on this topic.

The UNODC-WCO Container Control Programme (CCP) and the AIRCOP Programme are also supporting the Government of Mozambique in building capacity to improve risk management in the supply chain security and trade facilitation by sea and by air.