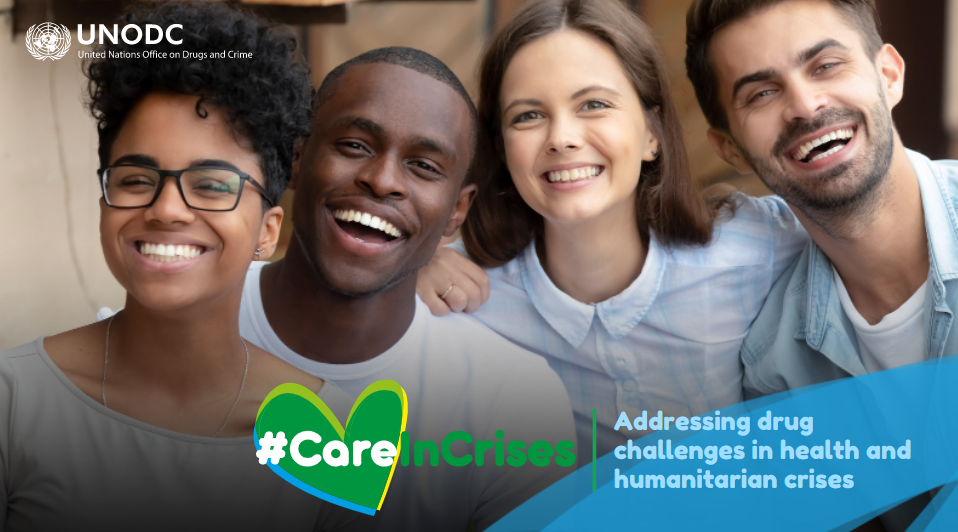 UNODCs Field Offices, 1 July 2022 — The International Day against Drug Abuse and Illicit Trafficking, or World Drug Day, is marked on 26 June every year to strengthen action and cooperation in achieving a world free of drug abuse.

And each year, individuals, communities, and various organizations all over the world, from civil society to the private sector, join in to observe World Drug Day to help raise awareness of the major problem that illicit drugs pose to society.

The focus of the International Day against Drug Abuse and Illicit Trafficking 2022 was “Addressing drug challenges in health and humanitarian crises”. Ensuring access to controlled medicines, guaranteeing evidence-based care, treatment and services, and preventing negative coping behaviours through support were among the calls to action highlighted both on the day and in the United Nations Office on Drugs and Crime (UNODC)’s World Drug Report 2022, launched last Monday.

Around the world on Monday 27 June, UNODC regional and support offices celebrated World Drug Day and presented the main findings of the World Drug Report 2022.

In Mexico City, UNODC’s Head of Coordination, Mariana Alegret, joined the National Commission Against Addiction’s annual virtual World Drug Day event, presenting the report to the press, drug policymakers and the general public. The event also heard from representatives of the ministries of health, public security and foreign affairs, as well as the Federal Prosecutor´s Office.

In Chisinau, Moldova, UNODC held a coffee morning with media, police, and civil society organizations (CSOs) where Simon Springett, UN Resident Coordinator in Moldova explained that "apart from Covid-19 and the war in our neighbouring country, we are also fighting a drug use crisis, especially with new psychoactive substances".

Through open discussions and a photo exhibition, journalists present at the event had the opportunity to get acquainted with the results of a collaboration between CSOs that provide socio-medical services to people who use drugs and the Chisinau police. Police deputy Alexei Grosu spoke about how the collaboration has helped to “change the mentality among the police towards drug users, who are now focusing on offering drug users the needed support by referring them to the CSOs who can provide socio-medical assistance.” UNODC’s Ina Tcaci underlined that such a collaboration was almost impossible a decade ago.

Constantin Cearanovski, representing the Positive Initiative CSO, told from his own experience how the police had played a positive role in motivating drug users toward treatment and rehabilitation, and Dr Lilia Fiodorov, narcologist at the Republican Narcology Dispensary, reported being able to aid 25 refugees who received drug treatment since the beginning of the war in Ukraine.

As the World Drug Report 2022 highlights, West and Central Africa is hard hit by the drug problem, despite having long being considered a mere transit zone. “In a context of health and humanitarian crises, West and Central Africa must continue to invest in data collection and analysis, disaggregated by sex and age, to strengthen early warning and evidence-based responses,” said Dr Amado Philip de Andrés, UNODC director for the region, speaking at the event.

Côte d'Ivoire, like other West African coastal countries, is facing an influx of drugs trafficked from Latin America, as evidenced by recent cocaine seizures off the coast of Abidjan in March 2021 and April 2022. General Vagondo Diomandé, Minister of Interior and Security, spoke to this challenge: “The Ivorian authorities remain committed to combating illicit drug trafficking with the support of UNODC, as demonstrated by the drafting of a bill relating to the fight against trafficking and illicit use of narcotic drugs, psychotropic substances and their precursors, as well as the national strategy against organized crime.”

For more on UNODC’s work in West and Central Africa, click here.

For more on UNODC’s work in Mexico and Central America, click here.