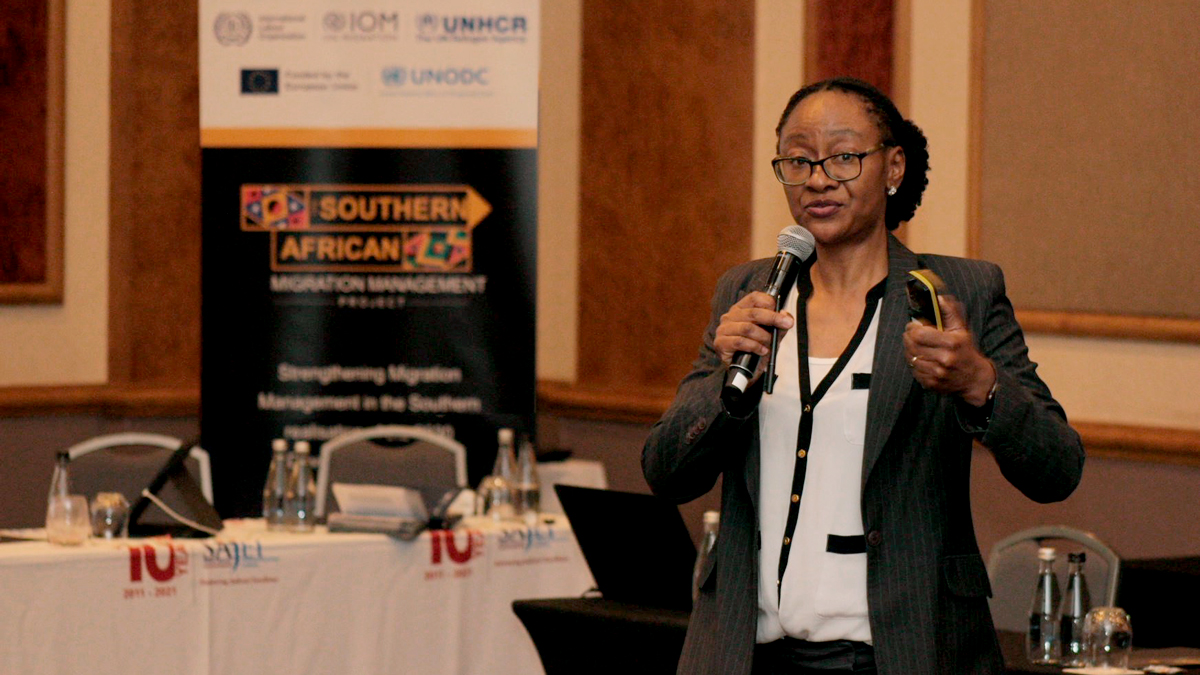 Justice Fiona Mwale elaborating on the prosecution of cases; © UNODC

Pretoria (South Africa), 4 November 2022 – It was a victory for law enforcement against a crime that had originated in cyberspace. The accused, ML, had been using Facebook over a period of four years to lure and groom young girls by promising modelling jobs and money.

He requested them to send him nude pictures and, once received, blackmailed the victims by threatening to expose their identities if they refused to engage in sexual acts with him and the co-accused. In some instances, these acts were filmed.

The accused was eventually sentenced to 25 years' imprisonment for his guilty plea on 26 counts of, inter alia: sexual assault; extortion; possession of indecent photographs; possession of prohibited visual recordings; and recruiting, harbouring, transferring, and receiving a child while knowingly or recklessly disregarding that the person is a child for the purpose of exploitation.

This case (R v ML & Ors Cr S 63/19) occurred in Seychelles and is featured in a Regional Case Digest launched in 2022 by the United Nations Office on Drugs and Crime (UNODC)’s Southern Africa office. The digest is meant to assist judicial officers to improve the identification of and conviction for the crime of trafficking in persons.

Explaining the significance of the Seychelles case was Justice Fiona Mwale, an experienced judge from Malawi who was commissioned by UNODC to lead a seminar meant to increase the knowledge of judicial officers in identifying and prosecuting the crimes of trafficking in persons and migrant smuggling.

Justice Mwale said the case in Seychelles illustrated that nothing has complicated the fight against human trafficking like the onset of cyberspace. “All you need to commit cybercrime is an IP address,” Justice Mwale noted.

She explained that cybercrime can be cyber-dependent or cyber-enabled. The former can only be enacted using computers, computer networks or other forms of information and communications technology (ICT), such as the creation and spread of malware and hacking to steal sensitive personal or industrial data.

On the other hand, cyber-enabled crimes are traditional crimes that can be increased in their scale or reach using computers, computer networks or other forms of ICT. Unlike cyber-dependent crimes, they can be committed without the use of ICT. Thus, in many instances, a simple cellphone can be used. Even inmates with access to cellphones in prisons have been found to run phishing scams.

However, identifying, investigating, and convicting criminals operating in cyberspace and on digital networks is complex.

According to Justice Mwale, this is because law enforcement authorities cannot easily access and secure evidence – or secure cooperation across borders – in instances where the perpetrator and the victim are in different places.

More significantly, to effectively deal with human trafficking perpetuated through cybercrime – such as the case listed above in Seychelles – there is a need for a certain level of digital expertise, which law enforcement officials do not always have.

The seminar represents just one instance in which UNODC’s Regional Case Digest can help illustrate criminal methodology, helping prosecutors and judicial officers to identify and convict criminals. The digest provides references to challenges specific to Southern Africa, including child trafficking, sexual exploitation, and the significance of customary practices.

The Regional Case Digest was developed in both digital and hard copy versions in the official languages of the Southern Africa region: English, French and Portuguese. Funding for the digest was provided by the European Union through the Southern Africa Migration Management (SAMM) project.

Keep yourself and your loved ones safe from human traffickers online! Read our Internet Safety Tips here.