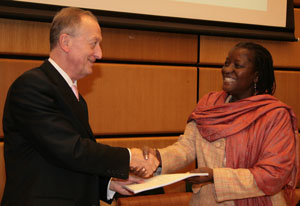 12 March 2009 - At a side event to the High-Level Segment of the fifty-second session of the Commission on Narcotic Drugs, the African Union Commission (AUC) and UNODC today launched their joint project to support the implementation of the AU Plan of Action on Drug Control and Crime Prevention (2007-12). The project is an operational response to the Memorandum of Understanding signed by the organizations in December 2007.

The main objective of the project is to strengthen the capacity of the AUC and the Regional Economic Communities (RECs) in implementing the Plan of Action by supporting policy-making, norm-setting and capacity-building at the continental, regional and national level in the areas of drug control and crime prevention.

At the sub-regional level, the Economic Community of West African States (ECOWAS) expressed their strong commitment to fight drug trafficking and related crime, recognizing that these issues  pose a serious threat to the security and development of the sub-region. ECOWAS called for the mainstreaming of drug control and crime prevention into national/regional development agendas.

In this context, the international community is concerned about the use of West Africa as a transit route for narcotics bound for Europe from Latin America. Drug smugglers take advantage of the region's porous borders and weak State and security institutions. UNODC's October 2008 report Drug trafficking as a security threat to West Africa highlights these concerns, stipulating that cocaine seizures in the sub-region had doubled every year for the past three years.

In his recent report to the Security Council in January 2009, United Nations Secretary-General Ban ki-Moon made an appeal to the international community to "support the sub region in facing the formidable challenge posed by drug trafficking," and stressing the "critical importance of building capacity in the countries of the sub region and mobilizing resources to help regional States in confronting the threat at the national and cross border levels".

In light of the 2007 Lisbon Declaration and the Africa-EU strategic partnership, the EU reiterated its strong support to the implementation of the AU Plan of Action on Drug Control and Crime Prevention (2007-12) as well as the ECOWAS Regional Action Plan.