Artists and UNODC unite for integrity

29 January - The power of literature and the film industry to capture large audiences can be an important ally in the fight against corruption. For example, by focusing not only on fictitious stories but also on real corruption cases, the film industry has contributed to raising public awareness through award-winning documentaries and feature films. Also many anti-corruption songs have become hits, carrying the message across every segment of society.

At the "Artists for Integrity" Special Event during the Second Conference of the States Parties to the UN Convention against Corruption in Bali, artists from across the world were given the opportunity to connect with grass roots organizations, whose work to curb corruption often remains obscure. This event proved to be a vibrant, interactive forum where ideas were exchanged and opportunities for future collaboration were identified. 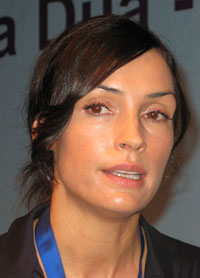 During the forum, actress Famke Janssen was appointed UNODC Goodwill Ambassador for Integrity. Ms. Janssen said that she was moved to action when she came to realize how corrupt forces can control money. "It is devastating that only a small percentage of money goes to help people," she says. "It does not have to be that way. If you want to heal people you have to stop corruption".

Ms. Janssen says she is proud of her new responsibilities. She feels that too many people go along with corruption because they do not know how to change their situation. In order to change this, she wants to lend her name to help UNODC promote action against corruption. 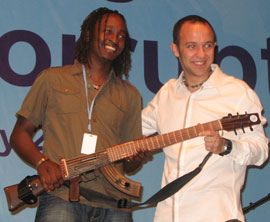 The underlying objective of this artists' forum is to close the gap between the heard and the unheard voices of the world. Reaching even further, the ultimate goal is to help turn communities from victims of corruption into actors for real and lasting change.