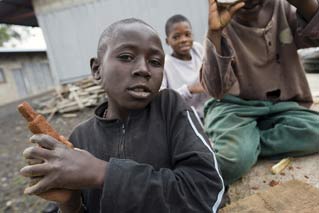 26 November - Across the world, many different actors are involved at the grass-root level in fighting child trafficking and the recruitment and use of children in armed conflict. Teamwork is vital for making this struggle more effective. UN.GIFT's regional event in Côte d'Ivoire at the end of November aims to combine these forces into more coherent and decisive action.

"This situation is a vibrant call for action and more needs to be done" he urged.

The UN.GIFT regional event, dubbed the "High-Level Expert Meeting on Trafficking in Children and Armed Conflict: Preventing and Combating the Recruitment and Use of Child Soldiers in West and Central Africa", is hosted by the Government of Côte d'Ivoire and takes place in Abidjan on 26-28 November, 2007.

Children involved in armed conflicts suffer serious harm and violations of their rights during hostilities or while carrying out related tasks. They are forced to engage in hazardous activities such as laying mines or explosives, as well as using firearms. Girls trafficked for their use in armed conflicts are particularly exposed to all kinds of gender-based violence, including rape and sexual harassment.

In West and Central Africa, these victims are predominantly women and children who live in the harshest conditions of vulnerability. Armed conflicts, socio-political instability, bad governance, environmental stress or disaster drastically increases the vulnerability of children and young girls to trafficking for a variety of exploitative purposes, including their recruitment and abuse in situations of armed conflicts and wars.

The phenomenon of child soldiers has been common to almost all recent African conflicts including in Burundi, Chad, Central African Republic, Côte d'Ivoire, the Democratic Republic of Congo, Liberia, Rwanda, Sierra Leone, Somalia, Sudan, and Uganda. Child soldiers are used by a variety of armed groups, including pro-government paramilitary groups, militias and self-defence units, as well as insurgent groups in challenging central government rule, or in conflict with governments over political power, natural resources and/or territorial control.

According to estimates by UN agencies and major NGOs active in combating the phenomenon in West and Central Africa, over 70,000 former child soldiers have been involved in disarmament, demobilization, and reintegration programs since 1998, while several thousands remain associated with armed forces and groups in the region Africa.

At the grass-roots level where the problem is most acute, non-governmental organizations and other civil society groups protect victims and raise awareness among vulnerable persons. "These groups are the foot-soldiers of the international community, on the frontline in the anti-trafficking campaign. But more can be done, and the national governments must be more actively involved and take on the lead in the efforts to increase the capacity of those fighting child trafficking for exploitation in armed conflicts", Mr. de Andrés stressed.

"Working together holds the promise for greater chances of success in such an uphill battle," he concluded.