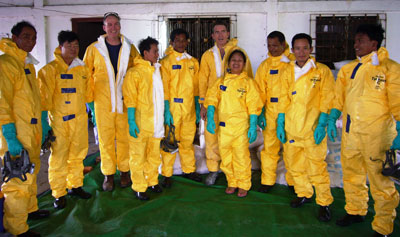 Recently, the Cambodian National Authority for Combating Drugs dismantled a clandestine laboratory in Kampong Speu Province (some 80 km south-west of Phnom Penh), the first such discovery made in Cambodia. The laboratory was in the first stages of the manufacture of methamphetamine, or crystal meth. During the raid, the Anti-Drug Department, in collaboration with the Police Commission in Kampong Speu, confiscated approximately 5.8 tons of the precursor chemicals, including the highly toxicthionyl chloride, needed to convert raw drugs into finished products. They also seized some equipment.

The Government requested UNODC's assistance in disposing of the chemicals and cleaning up the site. The chemicals were housed in a cattle ranch; a flimsy construction vulnerable to the elements. With the rainy season approaching, the poisonous thionyl chloride was at risk of exploding in contact with water. Fumes prevented anyone from entering the area without full protective gear, including face masks and acid respirators. A full-scale human and environmental disaster was looming.

UNODC responded to this emergency by raising the necessary funding and putting assistance on the ground in record time. As there are no facilities for disposal of chemical waste in Cambodia, the operation had to take place on-site. The operation needed comprehensive health and safety measures, including fire trucks and ambulances on stand-by and emergency arrangements with a local hospital. It was the first time that thionyl chloride had been disposed of through on-site neutralization. Drawing on the success of this operation, UNODC is now preparing to replicate it elsewhere. 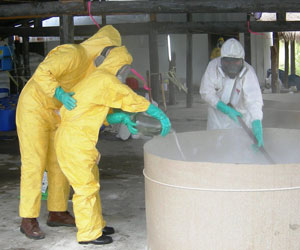 Today, the chemicals have been neutralized and the site has been rendered safe. After the Kampong Speu clean-up, a smaller drug production site was later dismantled. Looking ahead, UNODC will be providing further support to enable the Cambodian Government to seize drugs, clean up clandestine laboratories and handle all aspects of possible future seizures.