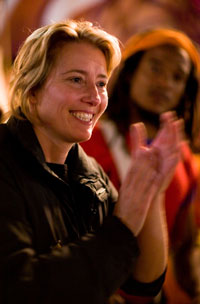 8 February 2008 - Oscar-winning actress Emma Thompson is joining forces with UNODC to raise awareness about human trafficking. The British actress will be participating in the Vienna Forum to Fight Human Trafficking that will take place from 13-15 February.

She is also the driving force behind a unique art installation - "Journey"- which uses seven transport containers to illustrate the brutal and harrowing experiences of women sold into the sex trade. "Journey" will also be coming to Vienna. Thompson spoke to Louise Potterton.

How did your personal "journey"- getting involved in human trafficking issues - come about?

I'm the Chair of the Helen Bamber Foundation. Helen Bamber is an 82-year-old woman who started her work as a human rights activist in Bergen-Belsen in 1945. She went there with the Jewish Relief Unit, which was one of the first relief units to go into concentration camps. Helen has spent her entire life developing her human rights work. I've worked with her on various forms of human rights abuse. A few years ago she started a new foundation, and I said I would love to help. I got more and more involved in her work, which concentrates on working with survivors of various kinds of cruelty.

And through this work you came into contact with victims of human trafficking. Can you tell me about the people you met, the stories they told you?

Most of our clients who have been trafficked are from Eastern Europe. I can tell you the story of my friend Elena, who was trafficked into the sex industry when she was 18. She lived in a small place in Moldova. She was at school and her family was perfectly happy but when her father died, the money dried up. Elena was sent to work at a market where she was groomed by this woman who said she could get her a job in Great Britain. She told Elena that she could be a doctor's receptionist and that she could save some money and go back to school. She was brought here to the UK, told what she had to do, refused to do it and was put into solitary confinement for two weeks. Then they said they were going to hurt her family. So, she started to work. She was forced to sell her body to strangers - for money that she was not allowed to keep. She had never seen a naked man before.

When you hear these stories, how do they make you feel?

I felt very inspired by Elena and felt that her survival somehow contained the seeds of a rebirth and also of a creative act. I think we need more stories and that's where someone like me comes in. I'm a story-teller and a communicator. There's no point in me just banging on about human trafficking and how bad it is and how we've all got to do something about it. I decided I wanted to do something. So, I got into contact with other artists and asked if they would help me, and they said yes, because everyone feels very strongly about it. We got together and created this piece of art - "Journey". First of all, I went to the Mayor of London to get a site. Then I went to the police because it seemed to me to be important to contact the civil society members who are so involved and on the cutting edge of this.

The Journey installation tells the story of the journey of a victim of human trafficking. Why did you choose this method to raise awareness on this issue?

Because there have recently been some very good film versions of trafficking. There is a wonderful film called "Lilja Forever", which is about trafficking, it's quite brilliant, very brutal. There's a great TV series called "Sex Traffic", which was very pertinent. Unfortunately, I think sometimes when you present things too graphically, people get frightened and they can't cope with the suffering. I wanted to find a way that I could engage people that wasn't simple story-telling, but there was a kind of story-telling that came halfway towards you and asked you to fill in the gaps. I sat down with Elena and it was because of her involvement that "Journey" came about. I said, 'let's use shipping containers because it's about moving people about. And, if we have seven containers, what would you put into each container?' So, we both wrote down the things that we thought should go in each container. It was really interesting because we came up with the same things.

How did people react to "Journey" when it opened in London last September?

The reactions were very varied. I would say 99.9 per cent of the people were just appalled, they didn't know what to do. People were coming out saying, 'this can't go on'. It didn't seem to affect women more than it affected men. Although many women wept, men were just as repelled by the whole aspect of it.

Despite this interest, do you think that the average person knows this is going on in their town, city or country - that women are being bought and sold and forced into the sex industry, it's happening all the world?

No, I don't think the average person knows and no one wants to know about suffering, they have got enough going on in their lives. You have to find ways to engage people without having to say, 'I'm really going to depress you now.' Nobody wants to be depressed by another story about what's going on the world. What they want is to be offered an opportunity to do something useful. There isn't a single person I've met who doesn't want that opportunity and that's what we've got to work on.

But what can the average person do to fight human trafficking? It's not like other causes where you can donate money.

Well, if you're someone who buys sex you can go to the madam or whoever is taking the money and say, 'where are your girls from, have they got passports?' You can also report any incidences you see of suburban households that have a great slew of young girls walking in and out for no apparent reason. If you're a shop keeper and some girl comes to you for condoms and tissues and doesn't speak English, you can enquire whether she is alright. You can get involved, you can open your eyes, because this is something that is happening on the street and it might be right round the corner from you. So, it is time for the public to be involved, no one can close their eyes to this, just inform yourself and get active. As for lobbying, you can lobby any number of governments to actually do something about this. It's time for everybody to look at this and say the buying and selling of human beings for whatever reason is not appropriate in the 21st century and should never be allowed again.