From coca to palm oil: alternative development in Peru 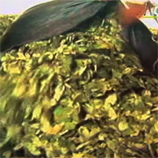 20 April 2009 - Until the mid-1990s, Peru was the number one producer of coca in the world. Today, instead of being involved in the illegal cultivation of coca bush, several thousand Peruvian farmers are cultivating crops as diverse as cacao, coffee and trees from which they get oil and heart of palm.

This video feature, produced by United Nations television, tells the story of a farmer who has opted to quit growing coca bush with help from a UNODC project.