How to tackle a disturbing consequence of drug control 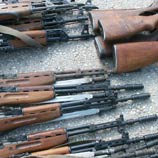 5 March 2009 - The Commission on Narcotic Drugs (CND) takes place from 11 to 20 March. In preparation for the meeting, the Executive Director of UNODC, Antonio Maria Costa, has prepared a paper on Organized Crime (pdf) as a Threat to Security: Tackling a disturbing consequence of drug control.

In it, he argues that international controls have limited the number of people who take illicit drugs to a small fraction of the world's adult population, much smaller than those who use other addictive substances, like tobacco and alcohol. But this undeniable success has also had a dramatic unintended consequence: "a criminal market of staggering proportions". He warns that, "if unattended, this criminal market will offset the many benefits of drug control. In fact, the crime and corruption associated with the drug trade are providing strong evidence to a vocal minority of pro-drug lobbyists to argue that the cure is worse than the disease, and that drug legalization is the solution."

He says that "this would be an historical mistake" because "there is no need to choose between health (drug control) and security (crime prevention)". They are complementary, and not contradictory commitments." Yet, he points out that "because drug trafficking enriches criminals, destroys communities and even threatens nations, it has to be dealt with urgently and forcefully". He calls for policy change "against crime, not in favour of drugs".