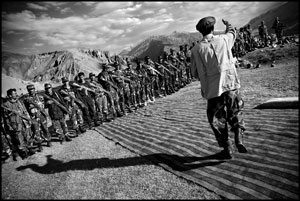 30 April 2008 - Afghanistan is virtually the world's sole producer of opium, yielding at least 93 per cent of the global annual output. This poses a serious health and security threat to the world, particularly Afghanistan and its neighbours. To better understand the nature, extent and impact of this threat, UNODC has launched a series of Illicit Drug Trend reports. Four reports, covering Afghanistan, Central Asia, Pakistan and the Russian Federation, have been issued in April 2008. A report on illicit drug trends in the Islamic Republic of Iran will be released later this year.

The evidence that they present attests to the vast challenges facing front-line and transit states and highlights the efforts of under-resourced law enforcement officers working in a context of long, unpatrolled borders, corruption and organized crime.

They also highlight the human cost of drugs - lives lost by law enforcement officers and drug abusers, as well as the impact of addiction and HIV/AIDS on families and communities.

The Illicit Drug Trend reports are designed to contribute to evidence-based policy."Enhancing data collection and analysis in the field of counter narcotics enforcement is essential for the formulation of any successful policy", says Hakan Demirbuken, UNODC Regional Monitoring Expert, Research and Analysis Section, Central Asia.

They are also intended to stimulate further action to counter trafficking and consumption of Afghan opiates. "Afghanistan as well as its bordering countries deserve much more international support in order to combat opiates trafficking and deal with the current levels of opiates abuse, HIV/AIDS and related health epidemics," says Antonino De Leo, Project Coordinator for the Paris Pact Initiative.

In 2007, opium poppy cultivation in Afghanistan reached an all-time high of 193,000 hectares. Traditionally, the processing of opium into heroin occurred in Afghanistan's neighboring countries, notably Pakistan, Iran and Turkey, with very few heroin production facilities located within Afghanistan. However, in recent years there has been a significant increase in the number of laboratories moving upstream along smuggling routes. As a result, Afghanistan is now a major centre for heroin and morphine production, not just opium cultivation. This process is only made possible by the smuggling of thousands of tons of precursor chemicals, most importantly acetic anhydride, into Afghanistan every year.

Between 2002-2005, the amount of opiates seized in Afghanistan increased every year, to a peak of 100 metric tons in 2005. This trend has since been reversed despite a concomitant increase in opium production.

In Pakistan, seizures reached a record of 35 metric tons in 2006, an increase of 46 per cent in only one year. 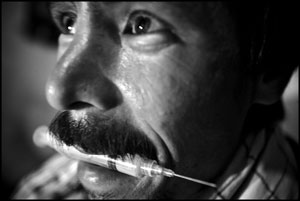 Along the so-called "Northern Trafficking Route" through Central Asia, most seizures over the past decade have taken place in Tajikistan:  almost 50 per cent of all opium seizures and 73 per cent of total heroin seizures.

In Russia, the proportion of heroin and opium seizures has increased every year since 1999. In 2006, Russian law enforcement officers were able to seize almost 3,000kg of opiates.

The reports call attention to the escalating drug abuse and addiction problem in the region. Afghanistan currently produces almost twice as much opium as is consumed worldwide. Experts fear that some of the oversupply is being consumed locally and regionally, with serious long-term health, economic, social, and security consequences. The number of illicit drug users in Afghanistan is estimated at nearly one million. There are only a few areas in the country where drug use does not occur. The amount of health care and drug treatment is limited. In 2005 there were less than 100 drug treatment centers available nation-wide.

In Pakistan, the estimated number of opiate users has reached a plateau. In 2006, approximately 628,000 opiate users were recorded, of which 77 per cent were chronic heroin abusers.

The wide availability of cheap heroin has changed patterns of drug abuse from the use of "traditional" narcotics, such as smoking opium and marijuana, to injecting heroin. This is increasing the risk of an HIV/AIDS epidemic resulting from unsafe injecting practices such as sharing needles.

The Illicit Drug Trends report were produced within the framework of the Paris Pact, an initiative launched in 2003 to promote coordinated measures to counter narcotic-trafficking in and from Afghanistan. Through this initiative, more than 50 countries and organizations have come together recognising their shared responsibility to combat traffic in and abuse of Afghan opiates. The Paris Pact Initiative is currently funded by the European Commission, the Russian Federation, Turkey, USA and other European countries.

UNODC has a " rainbow strategy" for containing the threat posed by Afghanistan's opium, made up of a range of programmes designed to reduce the supply, trafficking, and consumption of the world's deadliest drug.

The Illicit Drug Trends reports are part of the overall efforts of Paris Pact National Strategic Analysts to strengthen counter-narcotic data collection and analytical capacities and give international visibility to the counter narcotic activities of countries in the region.

Full text of the reports (all pdf files):