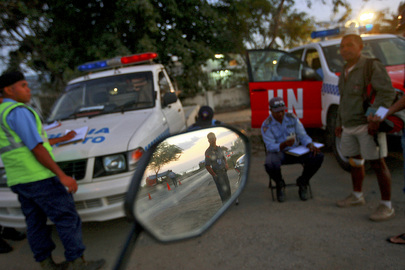 26 February 2009 - Look at almost any conflict zone in the world, and you'll find spoilers with links to criminal groups. Conflict creates cover for illicit enrichment - whether it be drugs, natural resources, or the trafficking of weapons and people. It also creates profitable new markets for smuggled goods. In the absence of the rule of law and licit competition, criminal groups fill a lucrative vacuum. Since they profit from instability they have few incentives for peace. Organized crime is therefore a major threat to keeping and building peace, and - because of its transnational nature - has an impact on regional security.

As a result, conflicts which may seem tractable drag on for years. "Peacekeepers, peacemakers, and peace-builders are starting to wake up to the impact of crime on conflict, and UNODC has a unique skill set that can address this urgent problem", says UNODC Spokesman Walter Kemp,

"The establishment of the UN Peacebuilding Commission, an ever-expanding number of peacekeeping operations that include a rule of law component, an increased emphasis on conflict prevention, and greater attention to the political economy of conflict all demonstrate the need for expertise in dealing with organized crime in fragile situations", says Mark Shaw, Chief of UNODC's Integrated Programming Unit.

Yet expertise is relatively limited. As the Executive Director of UNODC, Antonio Maria Costa has pointed out, "we need more specialists to fight organized crime. Under the UN flag, there are more than 130,000 soldiers and 10,000 police. Yet, the UN has less than a dozen experts on organized crime. How can we answer the calls for help when we have few people to send?"

UNODC is taking steps to rectify this problem, both within the UN system and among Member States. "UNODC is well-positioned to play a key role in this area since we are the guardian of the UN Convention against Transnational Organized Crime and the developer of a number of key tools to strengthen criminal justice in post-conflict settings", says UNODC Director of Operations Francis Maertens.

One such tool was launched in New York on 11 February - Model Codes for Post-Conflict Criminal Justice which was produced in partnership with the Office of the High Commissioner for Human Rights, the US Institute for Peace, and the Irish Centre for Human  Rights. "Blue helmets get most of the attention when people think about building peace and security", said Mr. Costa at the launch, "but long-term security depends first and foremost on the creation or restoration of the rule of law, and that is what this Model Code is for".

In addition to a growing box of precision tools to assess and deal with crime in post-conflict situations, the Office conducts research on illicit trafficking and organized crime as key factors undermining peacebuilding and post-conflict recovery.  It provides assistance in legal reform, law enforcement, and criminal justice and anti-corruption efforts. It also advises post-conflict countries on the formulation of national strategies for reforming their criminal justice systems. As such, UNODC experts can form an integral part of rule of law teams in peacekeeping operations. "We have value to add to UNDP and DPKO", says Shaw.

Concretely, UNODC has provided rule of law assistance to UN operations and national governments in Afghanistan, Guinea-Bissau, Sudan, Burundi, Sierra Leone, the Democratic Republic of the Congo, Somalia, Haiti, Iraq, East Timor and the Occupied Palestinian Territories (amongst others). Most of this work has been carried out in the past two years, and demand is growing.

West Africa is a good example of a "one UN" approach to tackling organized crime. Last year, UNODC sounded the alarm about drug trafficking as a threat to security in the region (substantiated in an evidence-based report). The issue was taken up in the Security Council, a donors conference pledged assistance, ECOWAS Ministers met to agree on a regional response, and UNODC has provided on-the-spot technical assistance in cooperation with the Secretary-General's Special Representative for West Africa, and the UN Peace-building Support Office in Guinea-Bissau.

Further analytical and operational work is planned. UNODC is currently in the process of finalizing a threat assessment guide to assist practitioners in the field to identify groups involved in organized crime. "Peacekeepers often sense that organized crime is a threat, but they are not sure what to do about it. We want to demystify organized crime, assess its impact and mitigate its risk factors in order to remove crime as an impediment to peace", says Maertens.