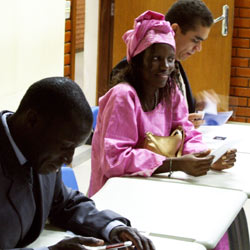 22 April 2008 - Police agents and criminal experts from various Portuguese-speaking countries in Africa, as well as from several South American countries, are in Brazil to attend a five-month training programme to fight organized crime more effectively. Jointly run by UNODC and Brazil's Federal Police Department, the initiative will increase South-South cooperation on the issue, which includes addressing cocaine trafficking from the Andean region through West Africa.

Representatives from Cape Verde, Guinea-Bissau, Sao Tome and Principe, Bolivia, Chile, Colombia, Paraguay, Peru and Uruguay form a group of 32 who are training with over 300 Brazilians in the Federal Police Academy in Brasilia. Welcoming the participants, UNODC´s Representative for Brazil and South Cone, Giovanni Quaglia said "I am sure this experience will bring you closer and enable your institutions` work to be more effective in countering organized crime."

According to UNODC´s World Drug Report, Brazil is the most used transit country for cocaine shipments to Africa, ahead of Colombia, Peru and Venezuela. Authorities in Guinea Bissau, on the coast of West Africa, estimate that 60 per cent of cocaine comes via Brazil and 40 per cent directly from Colombia.

In parallel, West African countries have become key transit points for cocaine shipments from the Andean region on their way to Europe. UNODC's report Cocaine Trafficking in West Africa: the threat to stability and development, finds that a quarter of all cocaine consumed in Europe transits via the region for a wholesale value of about $1.8 billion in West Africa, and a retail value of up to ten times that much on the streets of Europe. In Guinea-Bissau, the value of illegal trade in drugs is larger than the country's GDP.

"We can only combat organized crime through international cooperation, and being here together is just the beginning," says UNODC Senior Inter-Regional Adviser Sandra Valle, who helped kick-start the initiative. "This is not a simple gesture of kindness," adds Federal Police Director Luiz Fernando Correa. "This programme is the result of a real, increasing necessity to act in a joint, coordinated manner. It is the beginning of long-term cooperation."

Paraguay 's National Anti-Drugs police agent, Oscar Romero has high expectations. "Once I return to Asunción, I expect to pass on what I've learned to my colleagues." The course will facilitate information exchange, crucial to countering organized crime. To Lieutenant Carlos Morón, from the Bolivian National Police, being aware of your neighbour's realities is important to working together more effectively.

African participants are also enthusiastic about the training. For some, it is their first time abroad. Hermínia Sousa dos Santos, head of the laboratory section in Sao Tome and Principe's International Airport, has never travelled on an airplane before. Others, however, also acknowledge that national police forces lack basic infrastructure. "We need a lot of equipment and laboratories in order to work effectively," said Abel Pereira Gomes, from Interpol in Guinea-Bissau. Four female officers are attending the training, all from Africa.