"This is not a journey that anyone should take" 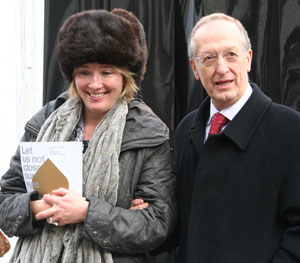 13 February 2008 - British actress Emma Thompson opened a harrowing new art installation yesterday that graphically depicts the terrifying ordeal of a woman sold into the sex trade. Kicking off the Vienna Forum on Human Trafficking, Thompson warned that human trafficking had increased "exponentially" over the past decade and that traffickers were "fantastically sophisticated".

Speaking to the press before the Forum which starts today, she said the trade in exploiting people by forcing or deceiving them into leaving their homes was "increasing big, big, big time - it's the third largest shadow economy after drugs and small arms."

The installation, comprising seven containers, is called "Journey". It was conceived by Thompson in close collaboration with a Moldovan woman, called Elena, who was trafficked into the sex industry in Britain when she was just 18.  She said there was a "universal truth" to the experience mapped out in the Journey.

Precise data about human trafficking is difficult to compile, given the hidden nature of the crime, she said, warning that it is easier to buy and sell people, especially women, who do not have birth certificates. "In many, many countries in the world, girls simply aren't registered and they get lost and they get sold and they get used, and I know that because I've spoken to lots of them in lots of different countries," Thompson said.

Victims often tell of a betrayal of trust. "Sometimes traffickers are neighbours, uncles, brothers, even fiancés and often other women who have families and daughters of their own". 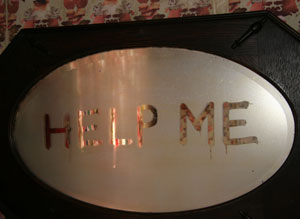 Antonio Maria Costa, Executive Director of the United Nations Office on Drugs and Crime (UNODC), said human trafficking is the modern-day equivalent of the slave trade.  "It happens all around the world, with boys, with girls, with people of all ages and all races, who are shipped, trafficked and exploited."

The crime is so widespread "that we have all become complicit in it," Costa said. "This is not a journey that anyone should take".

Emma Thompson is the chair of the Helen Bamber Foundation, a British-based group that helps rebuild the lives of victims. Helen Bamber said that trafficking is "really a form of torture."

"Journey" can be seen at Heldenplatz, 1010 Vienna (near the Hofburg) until 16 February.