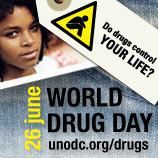 7 April 2009 - Today, on occasion of World Health Day, UNODC has launched a global campaign against drugs. "Drug control is not just about security, it's about health. Drug dependence is an illness, and should be prevented and treated as such", said UNODC Executive Director Antonio Maria Costa. The international campaign will run until 26 June 2009, which is the International Day against Drug Abuse and Illicit Trafficking.

The campaign of UNODC, whose slogan is "Do drugs control your life?" aims to encourage young people to take care of their health and to empower them not to take drugs. "Some people are pro-drugs, we are pro-health", said Mr. Costa.