What does environmental crime have in common with organized crime? 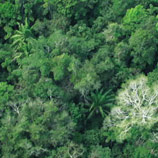 30 January 2009 - Environmental crime is often transnational in nature and involves organized crime activities such as trafficking in natural resources, the illegal trade in wildlife, illegal, unregulated and unreported fishing and illegal exploitation of and trafficking in minerals and precious stones.

It is widely recognized that environmental crime is a rising challenge for developed and developing countries. The impact of illegal activities broadly covered by the term "environmental crime" goes well beyond the obvious effects on the environment and biodiversity. Crimes against the environment have serious social, development and economic consequences, particularly in least developed countries, and are a threat to basic human rights.

The transnational nature of environmental crimes, the established involvement of organized criminal groups and the failings of Government structures that often sustain these forms of criminality, make them highly relevant to the work of UNODC. Forest products, including timber, wildlife and other forest biological resources, and hazardous waste are the object of international trafficking, often perpetrated by organized criminal groups that might also be engaged in the trafficking of other goods, often relying on failures in the criminal justice system.

In 2007, the Commission on Crime Prevention and Criminal Justice adopted its resolution 16/1 entitled "International cooperation in preventing and combating illicit international trafficking in forest products, including timber, wildlife and other forest biological resources". This resolution strongly encourages Member States to cooperate at bilateral, regional and international levels to prevent, combat and eradicate these forms of trafficking by applying the United Nations Convention against Transnational Organized Crime and the United Nations Convention against Corruption.

UNODC field offices have recently begun developing several projects concerning environmental crime in Moscow, Bangkok, Jakarta and Bogota. The projects have been set up in response to the needs of beneficiaries and have secured funding in a relatively short time, demonstrating the relevance of UNODC skills in the fight against the trafficking in natural resources.

In dealing with environmental crime, UNODC will continue to adopt a comprehensive and multidisciplinary response and will continue to  develop profound expertise and strengthen its existing mandate.