“Have you ever thought, why not me?" 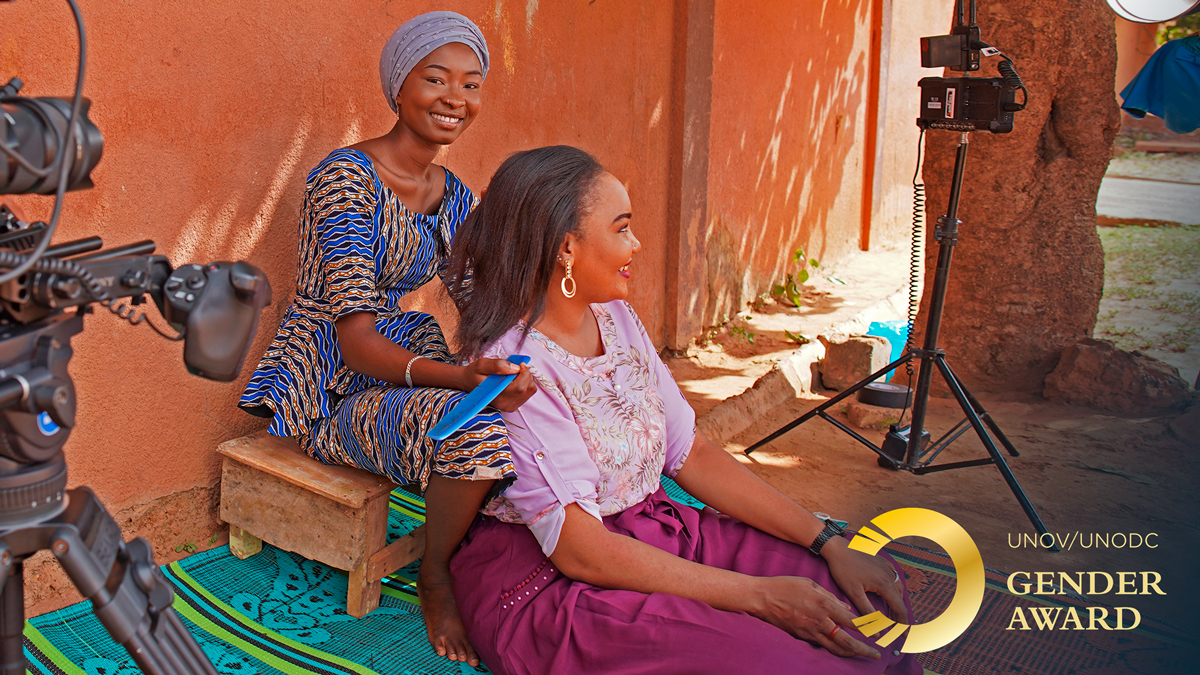 Cristina Iampieri and Anna Quarrey are both members of the Sahel Programme that won the Award in Category 2: Strengthening gender inclusivity in UNODC mandate areas, for its work on “Encouraging Women’s Participation in Security and Justice in the Sahel”. The Programme launched a communication campaign, “Why Not Me?”, to support the recruitment of women and gender-sensitive criminal justice responses within the G5 Sahel countries (Burkina Faso, Chad, Mali, Mauritania and Niger).

Through an innovative approach using new technologies and edutainment strategies, “Why Not Me?” aimed at deconstructing gender stereotypes, rethinking the perceptions of the security and justice sectors as male-only, and ultimately promoting social cohesion and peace in the region.

As Sahel Programme Regional Coordinator, and UN Volunteer, Cristina Iampieri and Anna Quarrey told us about the genesis, challenges and achievements of the campaign, seeking to encourage women’s participation in the security and justice sectors.

The Birth of the Campaign

Cristina Iampieri: My name is Cristina Iampieri, Regional Coordinator of UNODC Sahel Programme. I joined UNODC in 2018, having previously worked in the areas of justice and rule of law in peacekeeping missions. When I first arrived in Mauritania, I realised immediately that there was a serious issue with female representation in the security sector and within the governance structures in the local law enforcement sectors that the G5 Sahel was assisting to set up.

The key driver of this campaign is Anna Quarrey, a young professional within our team who has a background in security studies and a strong interest in gender equality, diversity, and inclusion. Our “Why Not Me?” campaign stems from the concept of edutainment, very familiar to Anna’s generation and less to older members of the team.

Anna Quarrey: I was thrilled to join the Sahel team and grateful for the trust that Cristina placed in us to explore the gender perspective of the work that we do with the security sector in the Sahel. This trust was very empowering for us. Initially, we conducted several workshops to assess the obstacles and opportunities that women face in the defence, security, and justice sectors in the Sahel countries. Among the testimonies, what really stood out is self-censorship and the family influence coming from male relatives, friends, or elders. This can play a big part in either supporting or discouraging the vocational choices of women in the Sahel. People often debate very seriously on this topic, but they also make a lot of jokes. That is how the idea of humour came out, answering to the self-censorship by saying “why not you?” or “why not me?”.

We have co-designed the campaign with the ministries of justice, defence, security as well as youth associations, who provided focal points to work with us. We worked closely together with focal points to create a socially and culturally sensitive campaign. This included research on the local languages in the Sahel countries and ensuring that the ‘characters’ and the tools (pictures, videos, exhibition…) of the campaign speak to the target audiences. For our team, it was crucial to have an inclusive process when designing the campaign and to adopt an intersectional approach. We learned a lot, it was both challenging and a lot of fun.

For instance, one of our goals was to produce edutainment videos that are fun and attractive, but we were also aware that the line between well-received humour and inappropriate depiction is thin. Making people laugh is a difficult exercise, even more there is an objective of social behaviour change on very serious topics. Plus, what is fun for some may not be for others and there are definitely some cultural specificities to humour. This is why we worked with young local comedians from university associations to draft the messages. Sometimes our internal debates on the choices of wording got rather deep! We also have certainly come across many challenges and pushbacks along the way. One of the most difficult one came from women themselves who refuse to advocate for gender equality. It was important for us to listen to them and seek to understand these positions because we wanted the campaign to be inclusive. For this reason, we built our team and working groups to be gender, religiously, ethnically and geographically diverse to reflect the population in its diversity. We also tested our campaign materials at different steps of the campaign development and collected a lot of feedback to have a better sense on how the messages would be received by the larger audience.

We are hoping that this campaign is going to bring positive change. I hope that slowly we can see security and justice institutions become more representative of their populations so that they can better protect them.

Cristina Iampieri: Despite the challenges, our campaign yielded so many good results. One of the key moments that I will never forget is when Abdoul, our colleague from the Mauritanian team, came to tell me that our campaign really inspired him. “My daughter can become whatever she wants,” he said to me. This led me to believe that the “Why not me” campaign is really transformative . Our partners in the G5 Sahel are promoting positive models of masculinity and encouraging other men to do the same. It is obvious that our audience felt the message we were trying to send, which is so much more than a simple exchange of information. In the end, every person that has seen the spots laughed at least once or twice. It’s a real success and a real team effort.

As Anna said, there were challenges at every single level of the conception and production of our campaign. Working with ‘real ’women in uniform as part of the campaign videos was our initial idea but then what about the possible risks we would expose them to in countries with active conflict? We decided to work with professional actors instead, even though this was a big unknown having no prior experience in this field.  We got lucky, as apparently the actors we hired turned out to be local stars! We learned that during the filming when we saw people asking for autographs!

I am very proud of the entire team. Our campaign is a team effort, combining the programme team, the logistical and operations colleagues such as our drivers and the procurement team. All of them joined the conversation and had valuable inputs for our campaign.

Cristina Iampieri: I believe we are actively combining female empowerment and positive masculinity while being serious and funny. The videos have received good feedback from all our national partners who see its relevance to the security and cultural contexts. We plan to produce the campaign videos in many other local languages to reach a wider audience in the Sahel region. Our team and I believe that integrating gender is an advantage, not a burden, that will yield positive results of peace and stability in the region and contribute to better responses to terrorism and organised crime. I wish that gender considerations will one day be fully integrated into the entire criminal justice chain and that women can work together on an equal footing. The only viable way is to transform people’s behaviours, deconstruct all the stereotypes around gender, and work simultaneously with both men and women in society to create a critical mass.