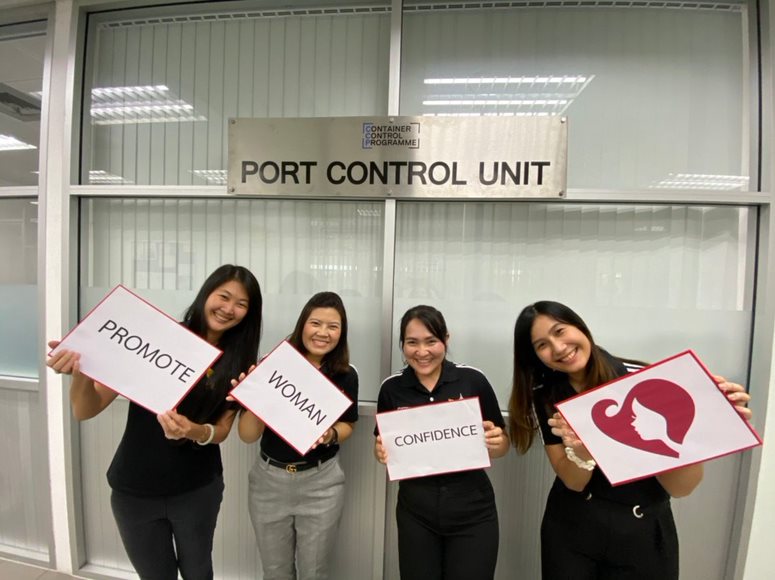 Vienna, February 2021- The Container Control Program (CCP) Women’s Network, established in 2015, aims to actively promote women’s roles and foster an inclusive dialogue around female participation, leadership, empowerment and freedom from discrimination in a sector often dominated by men. The network was one of the first of its kind within UNODC and continues to empower women working in law enforcement. The Gender Bulletin sat down with Ricarda Amberg and Anne Linn Jensen, Programme Officers within CPP, to discuss their motivations, their achievements and their outlook on the future of the CCP Women’s Network.

Gender Bulletin: What was the “a-ha” moment when you realised the importance of promoting gender equality within the Container Control Programme?

Ricarda Amberg: I don’t think there was a specific aha moment - it’s something that we just do in CCP. Drawing attention to the fact that that women are underrepresented in CCP,  made us want to  raise awareness about the issue  and try to  address the gender imbalances. . We were motivated to be an agent of change, to raise awareness, and to move forward in terms of striving towards gender equality.

Anne Linn Jensen: In the Container Control Programme, we saw very clearly that men are overrepresented in the CCP Port Control and Air Cargo Control Units,  so we were interested in getting to know why and what we could do about it. We are talking about law enforcement professions which tend to be male dominated.

Gender Bulletin: Why is it important for gender equality and women’s empowerment issues to be recognised within the Container Control Programme?

Ricarda Amberg: We are aware that women’s participation in law enforcement professions in some countries can be extremely limited and is often marginalised to peripheral roles. The perception that women are unable to perform security related roles is prevalent in some of the countries that we work in. The prevailing attitude in some countries is that women should be at home looking after the kids, especially in the late afternoon and evenings and consequently that you can’t rely on them to do shift work through the nights if that is required. This means that women may be excluded by the recipient country administrations from participating in the CCP. Therefore, it is important for us to counteract that view and break that stereotype by raising awareness on the issue and by fostering a dialogue.

Anne Linn Jensen: Law enforcement professions should mirror the societies that they operate in- it is to the benefit of the agencies. This is something we try to promote when we talk to counter parts, countries and donors.

Ricarda Amberg: We thought to ourselves “it’s 2015, we have got to do something!” We therefore created a network in order to foster a conversation around women’s participation and to raise awareness about the many issues.  We were one of the first global programmes to create a dedicated network on gender issues; a lot of people have since come to us with their own networking ideas, to ask for advice based on CCP’s experience.

We are proud to say that we have created the Network without any special dedicated financial resources; it has all been accomplished with the available human resources. We do not have gender focal points specially funded under CCP; nor do we have special funding from donor governments for gender related activities. We try to leverage existing expertise from UN Women or other organisations specialising in gender issues, for training and knowledge products.

Gender Bulletin: In 2020, the CCP Women’s Network celebrated its 5th anniversary. What are some of its greatest achievements?

Anne Linn Jensen: We have been collecting sex disaggregated data since the beginning to monitor the overall gender representation in all units, as well as the number of female unit leaders. Since 2015, the global average of female unit officers has increased from 11% to almost 16%. But we still have a long way to go. In 2015, we had 32 operational countries and now we have over 60. Many units are male dominated, so we are pleased that the average has increased.

It means that in many countries there is progress on gender parity, even in management positions with female heads of units. We actually have a couple of units that are all or predominantly female.

Another achievement is the community within the network we have created. Because we do not have funding, we do things that don’t cost very much. Everything is home-made! For example, we have created a WhatsApp group for female officers all over the world to exchange information and to support each other.

Ricarda Amberg: In 2019, to mark the 15th anniversary of CCP, we launched the ‘Champions for Change’ award to recognise individuals who champion gender and make a difference in this regard. It is important to showcase people who are doing good work and who can foster a dialogue on gender issues. It also acts as a promotional tool, highlighting CCP’s work on gender equality.

Finally, I am also proud of the Network’s quarterly newsletter. Every newsletter features an interview with a woman/role model/mentor within CCP.  This has been really important to the network as the women who read it may think “wow I want to do more”. It is an effective tool to communicate what we are about.

Gender Bulletin: What is the Network hoping to achieve over the next 5 years?

Anne Linn Jensen: Sometimes we see that women only come so far and are not promoted, so one of the things we have been working on is a professional career development programme for female officers. We are excited because we now have a donor on board who is developing this jointly with us. Hopefully we can offer this in the near future This will be a great achievement and will support women in their careers.

Ricarda Amberg: Once the results of the gender and diversity survey are known, we will be able to develop a plan for going forward. The survey was part of the fifth anniversary campaign and was available in 5 languages. I am hopeful that this will allow us to take the CCP Women’s Network in a direction that represents the needs of the people we want to serve.

Gender Bulletin: What advice to you have for colleagues who would like to start a similar initiative in their line of work?

Ricarda Amberg: - and then just do it! You need to know who you are working with and what the local expectations might be. It is important to talk to people and grow any initiative organically, from the bottom up, rather than imposing something from the top down.

Anne Linn Jensen: It is also important to realise that this will be a long-term commitment, there is no quick fix.

Ricarda Amberg: Things are obviously easier if you have dedicated resources; the two go hand in hand. Plan your network and also try to raise dedicated funds for specific activities.