What is the Trust Fund?

What is the objective of the Trust Fund?

The Trust Fund's mandate is to provide humanitarian, legal and financial aid to victims of trafficking in persons. The Fund supports actions by specialized NGOs around the world that ensure that women, children and men who have been exploited by human traffickers are identified, treated humanely as victims of a crime, and provided with the assistance, protection and support necessary for their physical, psychological and social recovery and reintegration back into their communities. Emphasis is given to providing access to justice, legal advice and assistance, including for victims to claim access to remedies, including compensation or similar aid packages from national governments, and to act as witnesses in court cases against their traffickers. The Trust Fund further seeks to prevent trafficking in persons, and to reduce the vulnerability of victims being discriminated, re-victimized and re-trafficked. 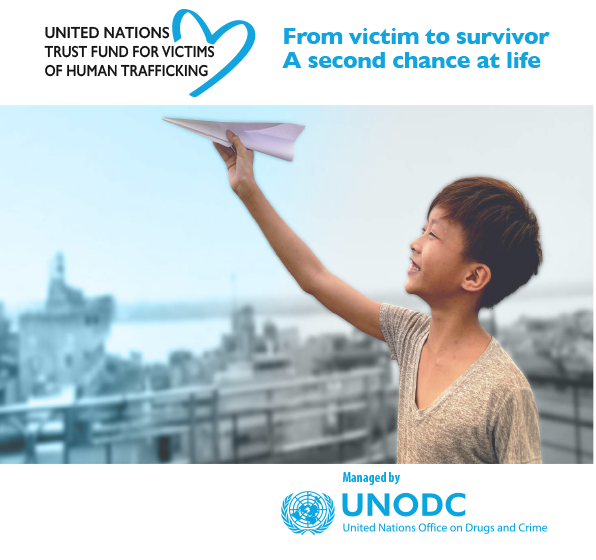 The Commission on Crime Prevention and Criminal Justice (CCPCJ)

The UN Trust Fund for Victims of Human Trafficking presented a side event at the 27 th Session of the CCPCJ on 15 th May 2018, co-sponsored by the Permanent Mission of France to the UN and UNODC.

The event, entitled "The UN Trust Fund for Victims of Human Trafficking: Focus on Assisting Women and Girls. Good Practices from France and Côte d'Ivoire," highlighted the achievements and lessons learned of the Trust Fund's second grant cycle and the way forward. French Ambassador, Jean-Louis Falconi, spoke on the importance of victim assistance in France and role of the Trust Fund in the global fight against human trafficking. NGOs from France and Côte d'Ivoire shared their experiences and good practices in assisting women and girl victims, with the aim of providing survivors with a dignified and sustainable second chance at life.

UNVTF would like to convey its sincerest gratitude to all participating Member States for supporting the Trust Fund during the successful UNGA High level meeting on the Appraisal of the Global Plan of Action which took place on 27-28th September in New York. In particular, we would like to thank the following Member States for their respective contributions and pledges to the Trust Fund in 2017, with a special mention to Italy for its generous donation of $1,000,000 USD. Each contribution will go towards the provision of essential services and direct assistance to victims of trafficking in persons worldwide. 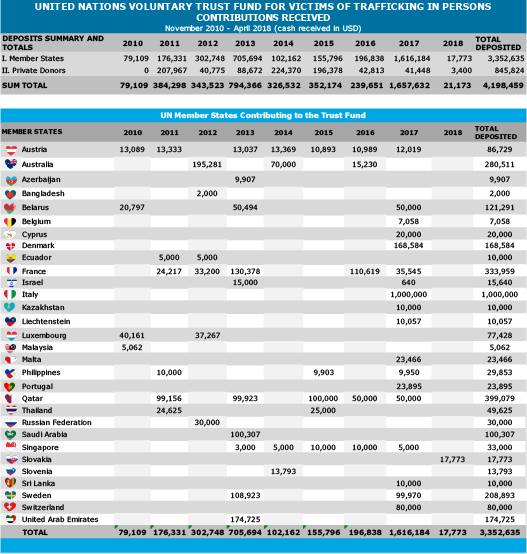 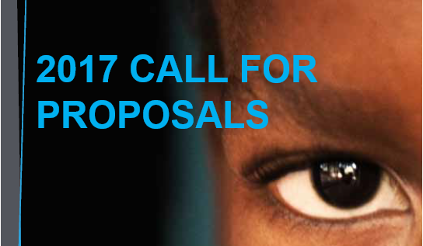 2017 World Day Against Trafficking in Persons

On the 2017 World Day against Trafficking in Persons, UNODC set up the first annual Giving Day to End Human Trafficking in cooperation with online fundraising platform Charidy.com. The goal of this 24-hour crowd-funding campaign has been successfully reached. Thanks go to the kind contribution of our donors for their support to the victims and survivors of this crime.

As UNODC Goodwill ambassador v Human Trafficking, I know this saves lives! I so badly want the goal to be met to help trafficking victims & survivors! -- Mira Sorvino 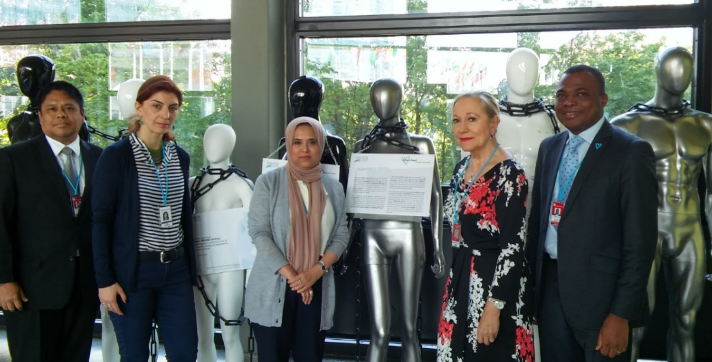 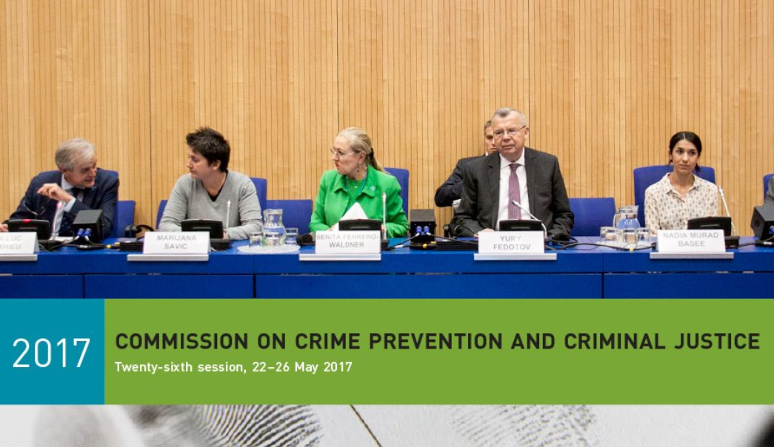 The Trust Fund held a special event ''Assisting and protecting Human Trafficking Survivors in the context of armed conflict, refugees and mixed migration flows: lessons learned on the ground'' with Nobel Peace Prize Nominee and UNODC Goodwill Ambassador for Dignity for Survivors of Human Trafficking, Nadia Murad, on Monday 22 May. Ms. Marijana Savic, Director of the Serbian NGO Atina, currently implementing a project funded by the UN Voluntary Trust Fund for Victims of Trafficking in Persons, presented her experience and efforts in assisting victims of trafficking identified amongst the current flow of refugees and migrants passing through Serbia. [Read More] 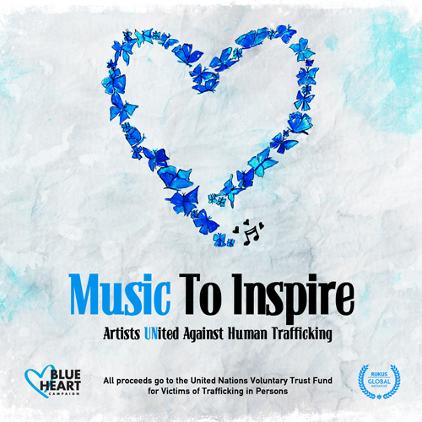 Over 65 renowned artists and dignitaries from around the world have collaborated with Rukus Avenue to participate in the " Music To Inspire - Artists UNited Against Human Trafficking" triple album that benefits the United Nations Voluntary Trust Fund for Victims of Trafficking in Persons.  This is a collective fight by the music community to make a social statement and end human trafficking. " Music To Inspire - Artists UNited Against Human Trafficking," a 60+ track collection of inspiring music, was officially released at an event at the United Nations headquarters in New York City on January 31, 2017. [Read More] 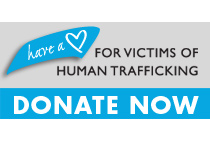 2016 World Day Against Trafficking in Persons

On the 2016 World Day against Trafficking in Persons, UNODC seeks to promote a better understanding and a greater engagement throughout the international community on the vulnerabilities that lie behind every case of human trafficking and the exploitation suffered by every victim of this crime. Vulnerability, in all its different forms, is central to how trafficking is understood and to how it can be tackled. [Read More]

On May 26th the special high-level event: "PROVIDING EFFECTIVE ASSISTANCE TO VICTIMS OF TRAFFICKING IN PERSONS" was held in Vienna at UNODC Headquarters 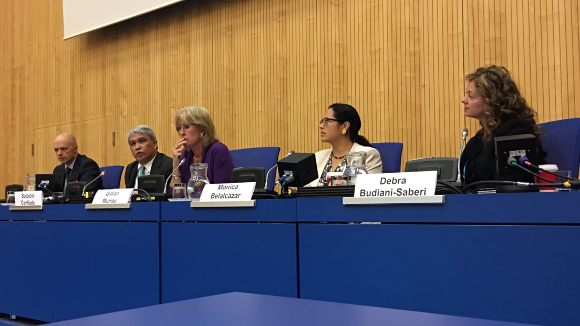 On February 9th the special high-level event : "In stronger partnership and better coordination of efforts to stop human trafficking: Eradicating modern-day slavery through sustainable development" was held in NYC

The United Nations Voluntary Trust Fund for Victims of Trafficking in Persons recently disbursed funds to 19 new projects. Click the map for more information on the selected NGOs: 2015 World Day Against Trafficking in Persons

In 2014, the #igivehope campaign was launched to raise awareness around human trafficking and provide everyday people with a way to show solidarity with the victims most affected by this crime. This year, we're encouraging people across the globe to take part in the campaign and share it with their friends, families and communities. [Read More]

At any given time, millions of people are trapped in modern-day slavery through human trafficking. Women, children and men across the globe find themselves being enslaved in forced labour and domestic servitude, sexually exploited or used as child soldiers.

According to the United Nations Protocol to Prevent, Suppress and Punish Trafficking in Persons, Especially Women and Children, human trafficking is defined as the recruitment, transportation, transfer, harbouring or receipt of persons, by means of threat or use of force or other forms of coercion, of abduction, of fraud, of deception, of the abuse of power or of a position of vulnerability or of the giving or receiving of payments or benefits to achieve the consent of a person having control over another person, for the purpose of exploitation. Exploitation includes, at the minimum, the exploitation of the prostitution of other or other forms of sexual exploitation, forced labour or services, slavery or practices similar to slavery, servitude or the removal of organs. 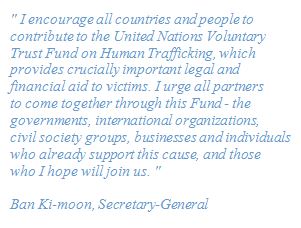 Human Trafficking has become a global enterprise affecting nearly ever country in the world. It is a crime that shames us all.

Sadly, indications point toward most trafficked persons as never being formally identified - a cruel twist which denies them assistance when they most critically need it. In a bid to provide help and support to those most affected, Secretary-General Ban Ki-moon has launched the United Nations Voluntary Trust Fund for Victims of Human Trafficking.

Administered by the United Nations Office on Drugs and Crime (UNODC), the Victims' Trust Fund facilitates actual, on-the-ground humanitarian, legal and financial aid to victims of trafficking through a range of avenues, including governmental, inter-governmental and civil society organizations. The Victims' Trust Fund has one primary objective: to provide the opportunity for people from all walks of life including governments, the private sector, international organizations, NGOs and individuals to work together to provide practical and effective solutions to assist victims of human trafficking across the globe.  [Read more]

The Fund was established in accordance with resolution A/RES/64/293 Article 38 of the General Assembly on 12 August 2010 - United Nations Global Plan of Action to Combat Trafficking in Persons. Article 38 states:

To ensure efficient, transparent, and accountable Fund administration and to support uniform and consolidated reporting, UNODC is designated as the Fund Manager for the Fund. UNODC will administer the Fund, with the advice of a Board of Trustees appointed by the UN Secretary-General, in accordance with the Financial Regulations and Rules of the United Nations and the relevant policies and procedures promulgated by the Secretary-General. [Read more]

Your support can provide necessary assistance, such as:

a safe place where they can recover

schooling and training in life skills for children

compassionate support in a caring environment

legal support and advice on their rights

Contributions to the Fund may be accepted from governments, intergovernmental or non-governmental organizations, private-sector organizations and the public at large, in accordance with the United Nations Financial Regulations and Rules. Acceptance of funds from the private sector will be guided by criteria stipulated in the UN Secretary-General's guidelines on cooperation between the UN and Business Community.

Contributions are accepted in United States Dollars or any fully convertible currency, deposited directly into the following bank account: