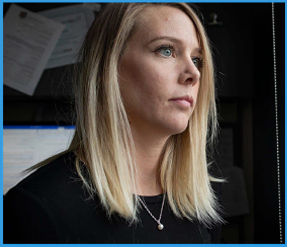 "I will continue to remind survivors of human trafficking how powerful they are."
Karly Church from Canada is a Crisis Intervention Counsellor at a regional support service for victims of human trafficking. Karly meets with politicians and visits community centres to raise awareness of the crime and speaks openly about her experience as a victim of sexual exploitation. The school board for Durham Region has also approved a presentation given by Karly and her colleagues as part of the curriculum for all grade nine classes. They talk to 13 to 14 year olds about sex, consent and online safety and discuss the warning signs of human trafficking. Karly also teams up with the Anti-Human Trafficking Unit of the regional police force, joining them on operations.
This is her story.