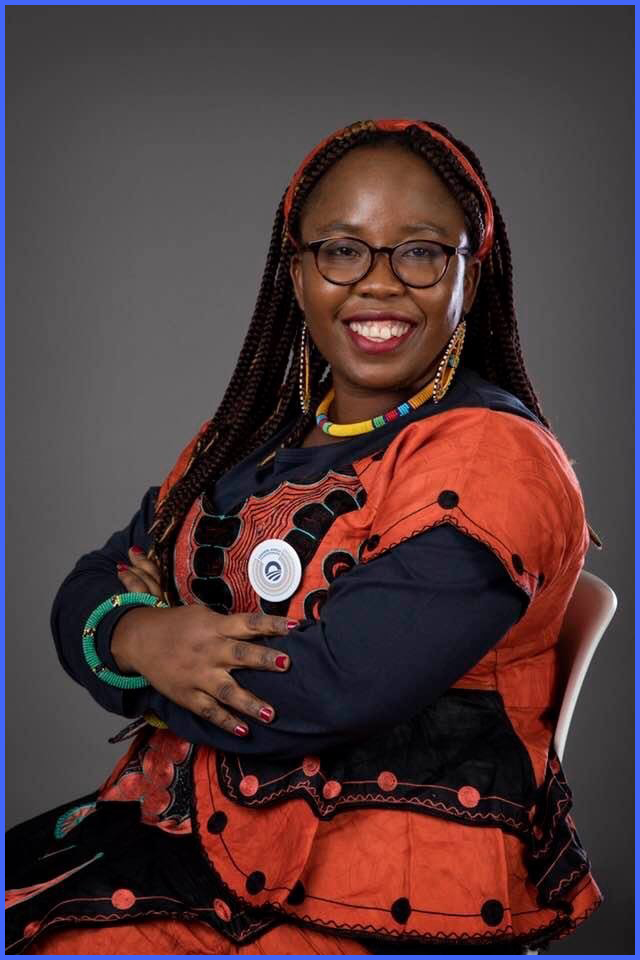 "Don't let the exploitation be the end, turn it into something great."

Francisca Awah from Cameroon is the founder and Executive Director of The Survivors' Network. This organization, which is led by survivors of human trafficking, rescues women from national and international situations of exploitation, and empowers them to rebuild their lives and be reintegrated into society. The Network also runs awareness raising campaigns among vulnerable communities in Cameroon, especially in rural areas of the country. Since it was launched in 2015, the Network has supported the rescue of over 2,000 victims of human trafficking. In 2018, Francisca was honoured by the U.S. Department of State for her work against human trafficking.

This is her story:

In 2010, I went to Norway to do my master's degree in human rights and multiculturalism. There I became a victim of sexual abuse. In 2012, to escape from this situation, I had to return home to Cameroon before I had even finished my studies.

I had such a difficult time. I could not find a job and in 2013 become a mother. Then in 2015, I saw an advert in a newspaper about English teaching jobs in Kuwait. The man who had posted the advert was from my village. I knew him from my childhood.

He came to visit me and said how well educated I was and that he had seen how I was struggling since returning from Norway. He mentioned that the salary I was getting at that time was way too little for my level of experience.

And my life was tough. I could not take care of myself or my young son. The trafficker had actually studied my vulnerability.

He said he would send me to Kuwait to teach English if I paid him several hundred dollars.

I was excited and happy about this possibility, because it was a way to work and take care of my family.

This is how he managed to traffic me. He was part of a bigger network.

When I got to Kuwait there was no English teaching job. A family met me at the airport and took my passport from me. I never saw it again until I managed to escape three months later.

I was forced into domestic servitude and worked long hours with no food or medical attention, and I was in a lot of pain. I was never paid.

In three months, I worked in three houses. When I left one house, I would go back to the agency, which is basically like a shopping mall where lots of maids are sitting there waiting for people to buy them.

In the last house where I was forced to work, I stayed for two months and two weeks. I kept a diary and wrote about my ordeal every day.

The lady of the house was from Lebanon and had three sons. I told her that my mother in Cameroon could no longer look after my son. I had never been paid, so I could not send money to her, and I wanted to return home.

She said, "Francisca , you are like the TV in my room. You are a commodity and need to work. We bought you. If you want to go home, then pay us back and then look for money for your flight."

I realised that I needed to escape and even considered selling my kidney to pay for the airfare back to Cameroon.

I had seen an advert in a newspaper and contacted a family that wanted to buy a kidney for a lot of money.

It was not until the day they were coming to collect me to take me to the hospital that I changed my mind. They kept contacting me, so I had to block their calls.

One day when I was working in the kitchen, I saw a TV feature about CNN's Freedom Project and organizations that fight against modern-day slavery. I made a note of the names and since I never had a break, I would go to the rest room and contact the organizations.

I got lots of automatic replies, but then an organization in New York, Freedom for All, replied to me and we started to communicate.

I also joined a Facebook group with other women from Cameroon. One said she would pick me up so we could run away. Freedom for All guided me through this escape process.

Usually, when the family left the house, they locked the door. But on one Friday, the wife was in Lebanon with two of the sons, and the husband and oldest son were going to pray.

The man had been sexually abusing me. I had been pretending that I was enjoying it, so I could gain his trust. It worked, and he left the door open on that fateful Friday.

I ran from the house, leaving my clothes behind, and with the other woman from the Facebook group, I got in a taxi.

I went to the embassy of the Central Republic of Africa and there I found 17 other maids seeing refugee. They let me in and called my employer, asking him to return my passport.

He did, but I was told that if I did not leave Kuwait within a week, the employer would bring charges against me. I had no money to pay my flight, but Freedom for All supported me and in less than four days I had left Kuwait.

It was not easy when I returned to Cameroon. I was stigmatized by my family. They said, Francisca has done it again. She went to Norway but struggled to make a good life. Now she was in Kuwait and failed again, nothing good will come of her.

This pushed me to tell my family what had really happened to me and explain what I had been through. Then I started to talk within my community too and tell people that just because you get on an airplane and travel abroad, it does not mean that you are already successful.

So, this is how I started my journey, by telling my story. I was contacted by other survivors of human trafficking who had been rescued with the help of Freedom for All, and we formed our network.

There is a lot to do. We are a team of 15 volunteers in the Survivors' Network.

We rescue women and children from exploitation in Cameroon, and help to repatriate victims from the Middle East, the Gulf States and other parts of Africa.

Fifty percent of our work is based on economically empowering the victims once they have been returned home. If this is not done, they can fall victim to being re-trafficked.

We need to make sure that rescued women can earn a living, many of them have no qualifications.

We provide vocational training, teach women how to write business proposals and launched a micro finance scheme so women can start their own small businesses.

Recently, we opened a shelter for rescued women. Many of them have no place they call home, so this is a pace where they can stay and receive counselling.

The Network also does a lot of awareness raising work in Cameroon, where a lot of people do not know what human trafficking is, especially in rural areas.

We want to prevent women and children from falling prey to traffickers, so we visit communities, schools, churches and markets to conduct workshops.

The majority of the people we speak to really believe what we are saying. Some realise that they have been victims of domestic trafficking or that their children are currently being exploited.

My work now is not just a job, it is my life. This is how I got through my ordeal. But it is difficult to heal. There are quiet times when the memories return and you feel really low.

The trafficker who tricked me ran away to Europe. He had trafficked over 70 women, including his own girlfriend, and had made a lot of money.

My message to other victims of trafficking is that it is never too late to pick up the broken pieces and start over. You don't know where it will lead to. Don't let your situation be the end. Turn it into something great.

Organizations like the United Nations should provide a space for survivors of human trafficking. A place where survivors of different backgrounds, cultures and countries can come together to share experiences and discuss what we really need.

And when such big organizations are looking for the facts and data, come and see us. See what we are doing. The real information will come from us.