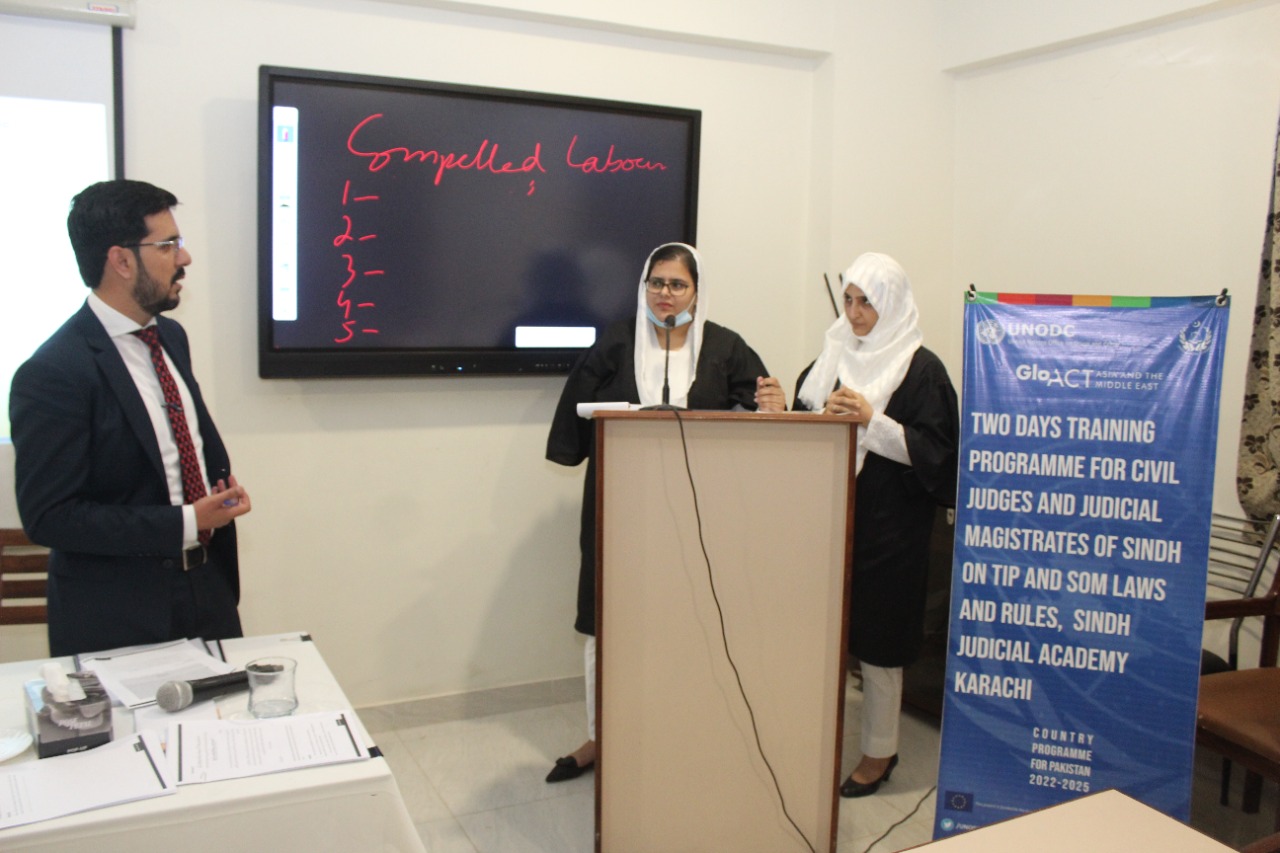 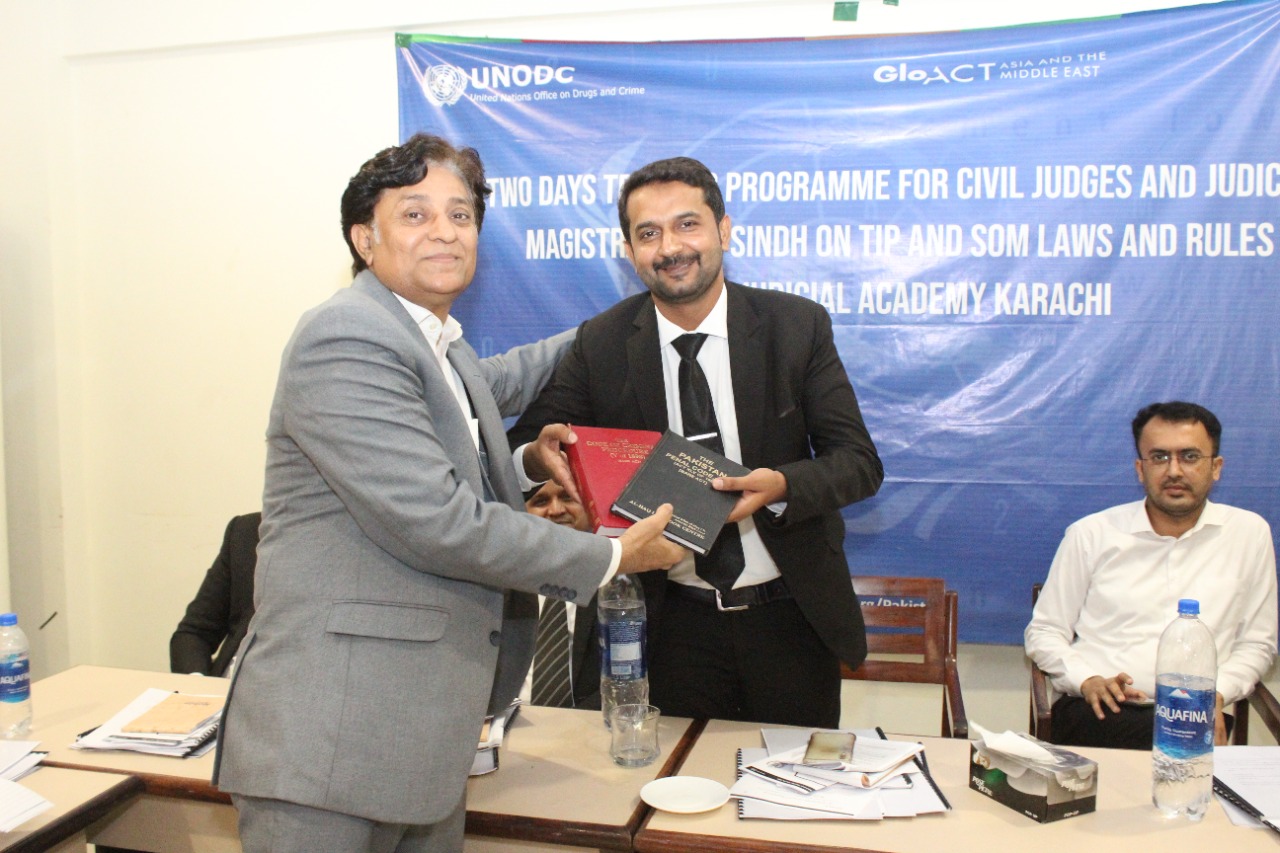 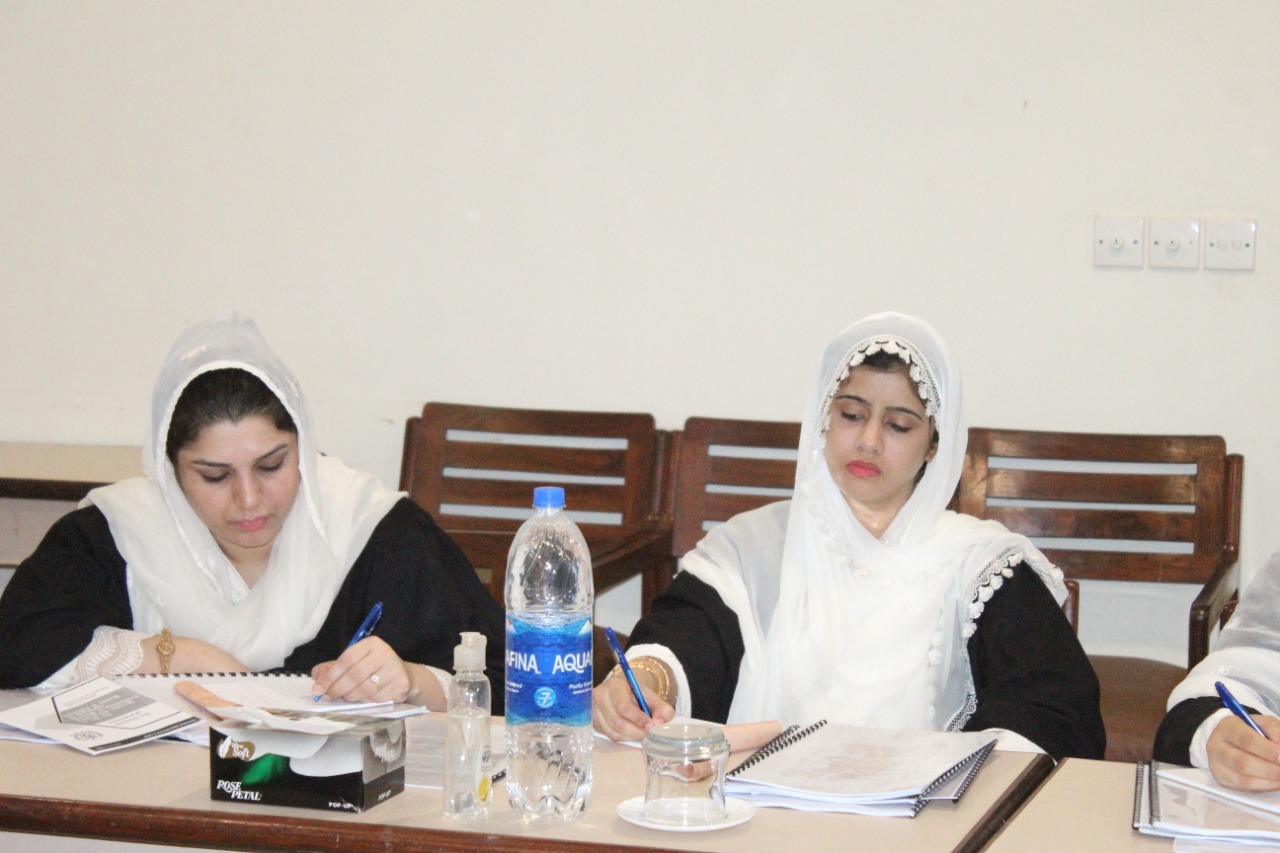 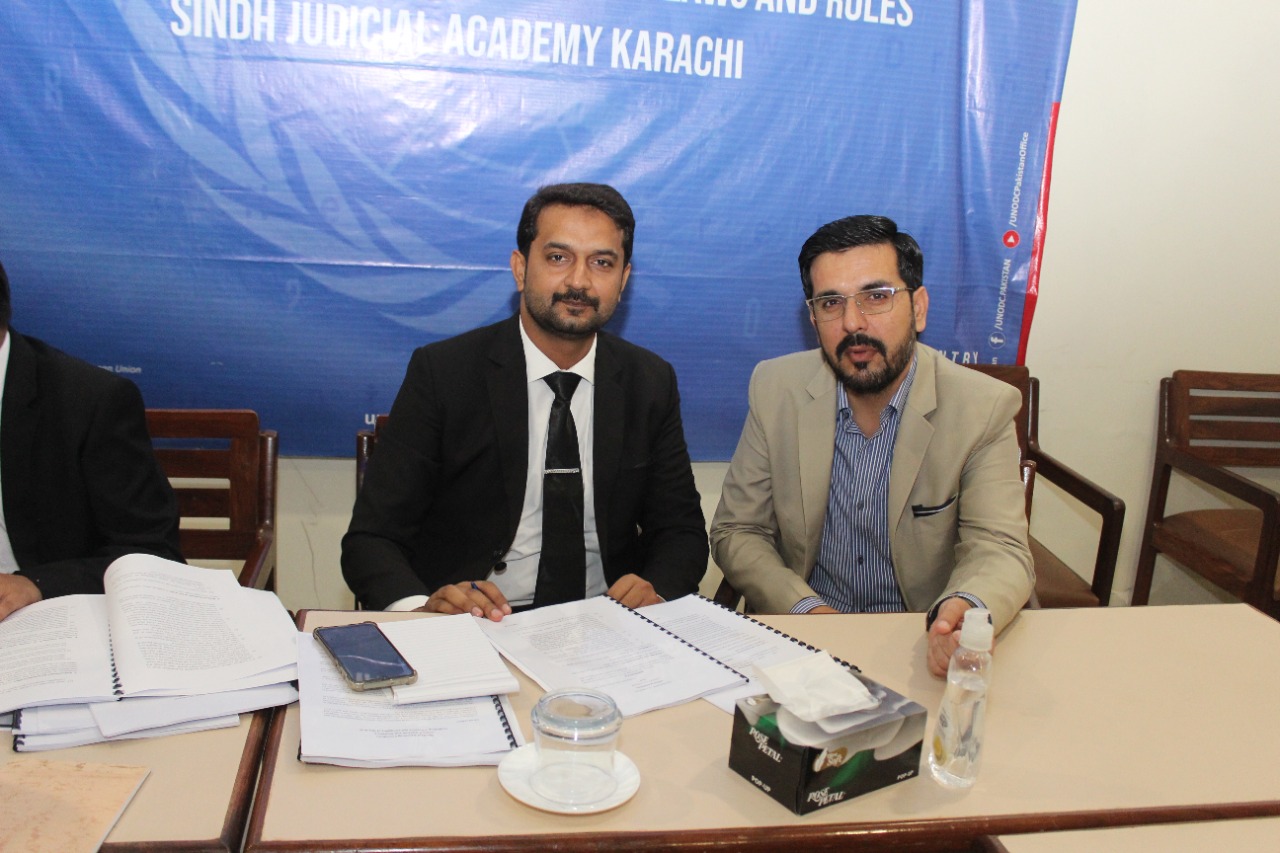 Karachi, Pakistan - July 2022 - Transnational crime networks, which flourish during regional crises and border vulnerabilities, represent one of the many challenges in Pakistan. To strengthen the government's response to these challenges and counter trafficking in person (TIP) and smuggling of migrants (SOM), UNODC in the framework of GLO.ACT Asia and the Middle East organized four training sessions for 81 judicial officers (57 male, 23 female) in July 2022. GLO.ACT organzied the sessions from 4 to 5 July, 6 to 7 July, 18 to 19 July and 20 to 21 July at the Sindh Judicial Academy, Karachi, Pakistan.

The sessions allowed the judicial officers to examine, in greater depth, areas in which they faced challenges or seek further clarification where there were uncertainties while dispending cases related to TIP or SOM-related crimes.

Muhammad Qasim Mandokhail, UNODC National Expert, welcomed the participants and briefed them about the objectives of the sessions. He said that UNODC, with the help of the Federal Investigation Agency, has been working for many years to combat these two organized crimes in Pakistan. After that, the Government of Pakistan enacted "The Prevention of Trafficking in Persons Act, 2018" and "The Prevention of Smuggling of Migrants Acts, 2018". These laws align with the international legal framework and are based on United Nations model laws on Trafficking in Persons (TIP) and Smuggling of Migrants (SOM). Mr Mandokhail further spoke about the relevant provisions of TIP and SOM and the Acts’ by-laws.

The sessions allowed attending judges to gain additional insights into the specific issues concerning human trafficking and migrant smuggling and the differences between the Trafficking in Persons Act, 2018 and the Smuggling of Migrants Act, 2018.

Muhammad Shahid Shafiq, District and Sessions Judge and senior faculty member at the Sindh Judicial Academy, spoke about the international legal framework and discussed in detail the relevant provisions/articles of the United Nations Convention against Transnational Organised Crime (UNTOC). He highlighted and discussed the relevant articles of the Protocols thereto. He also spoke about the United Nations Convention on the Rights of the Child and the United Nations Convention on the Elimination of all Forms of Discrimination against Women. Judge Shafiq also mentioned judicial cooperation, focused on mutual Legal Assistance and mentioned that the court might secure and gather such evidence by using the mutual legal assistance framework during the investigation and trial.

Meanwhile, Justice Abdul Rasool Memon, former Judge of the High Court, Sindh, spoke about the role of magistrates when dealing with the cases of human trafficking and migrant smuggling. He discussed in depth the non-criminalization provision embedded in both laws and addressed the concept of victim protection.

He also highlighted the role of judicial magistrates in sentencing. He noted the special provisions within the Acts, which enable magistrates to award sentences up to 14 years and fine up to two million Pakistani rupees. He spoke about the quantum of sentences and discussed in detail the importance of judgment writing considering judgments of apex courts.

Ambreen Aslam, District and Session Judge, shared her thoughts about women and children's well-being. She drew the audience's attention to article 25 of the Constitution of Pakistan 1973, whereby special legislation may be introduced for women and children. She highlighted that in most cases, children and women are victims of trafficking and smuggling of migrants. Therefore, judges should take extraordinary care while dealing with these cases and adopt a victim-centred approach.

When asked about the training, Benazir Ashraf, Civil Judge/Judicial Magistrate-1, Karachi (Central) said “The training programme organized by UNODC provided all the relevant information regarding the Prevention of Trafficking in Persons Act and Prevention of Smuggling of Migrants Act. I am blessed to be part of this training session as I was not aware of these laws before it, but they will help us in our judicial duties.”

Shafiq Ahmed Kharal, Civil Judge/Judicial Magistrate-I, Shahdadpur, District Sanghar, shared his views stating, “I attended the two days training session, and I learned a lot of things which will benefit my job. I appreciate such knowledge-based workshops, and I suggest that such workshops may be held in the future. I feel honoured to participate in this workshop which improved my legal understanding of the newly enacted laws.”