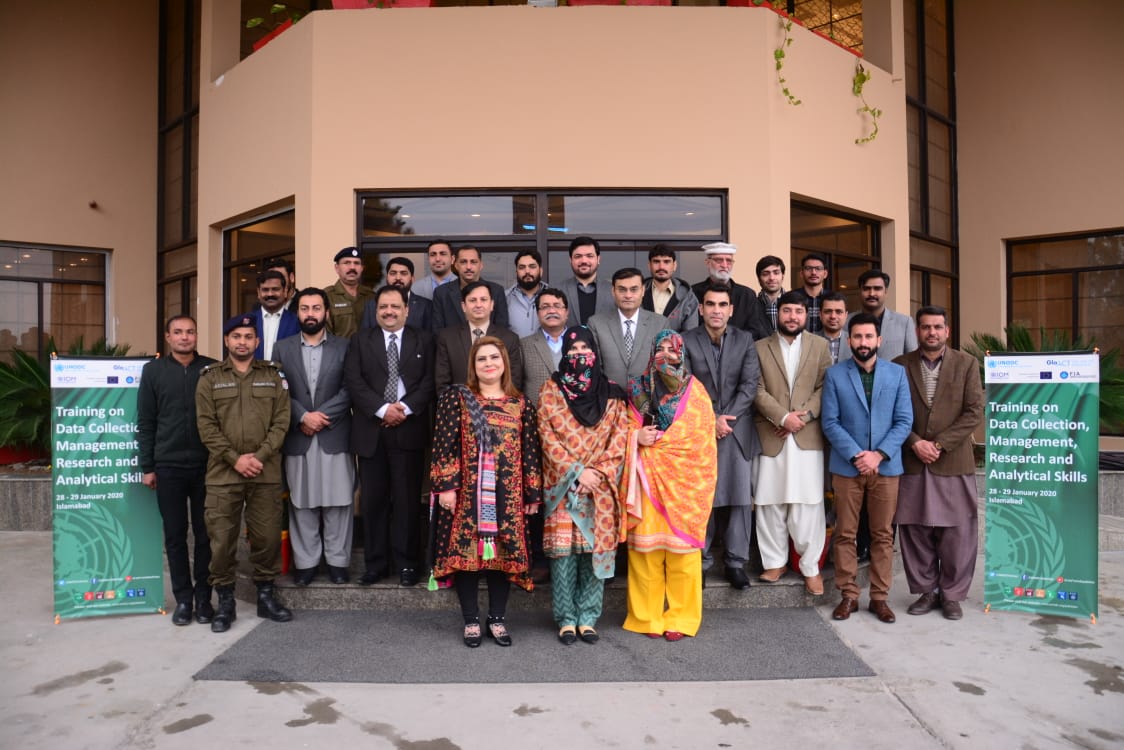 Islamabad, Pakistan 4 February 2020 - UNODC, under the Global Action to Action to Prevent and Address Trafficking in Persons and the Smuggling of Migrants  ( GLO.ACT - Asia and the Middle East) conducted two-day training workshop on data collection, management, research and analytical skills for law enforcement agencies (LEAs) in Islamabad from 28 to 29 January. A previous training workshop on the same subject, held in December 2019, was attended by officials from the Federal Investigation Agency (FIA) and the provincial police offices of Punjab. The second workshop was opportunity for 25 (3 female, 22 male) FIA and police officials from Khyber Pakhtunkhwa (KP), Rawalpindi and Islamabad to learn more about adequate data collection, management and reporting.

One of the reasons behind the training was to develop a common understanding amongst the participants on the "The Prevention of Trafficking in Persons Act, 2018" and "The Prevention of Smuggling of Migrants Acts, 2018". These laws define the acts of trafficking and smuggling as two separate crimes, thereby making it mandatory for law enforcement agencies to collect segregated data for both crimes to reflect trends and patterns and accordingly prioritize their polices and operational plans. These laws also require the government to assist and protect the victims of trafficking and vulnerable migrants; consequently, equal emphasis is placed on maintaining victim data and document actual referrals.

Throughout the two-day workshop participants engaged in discussions around victim identification and indicators, the importance of documenting disaggregated data on victims of different crimes, including age and sex. The role civil society plays in terms of assistance and protection and how that needs to be captured was also discussed. Finally, human rights and gender considerations were at the centre of every session.

The main objectives of the workshop were: 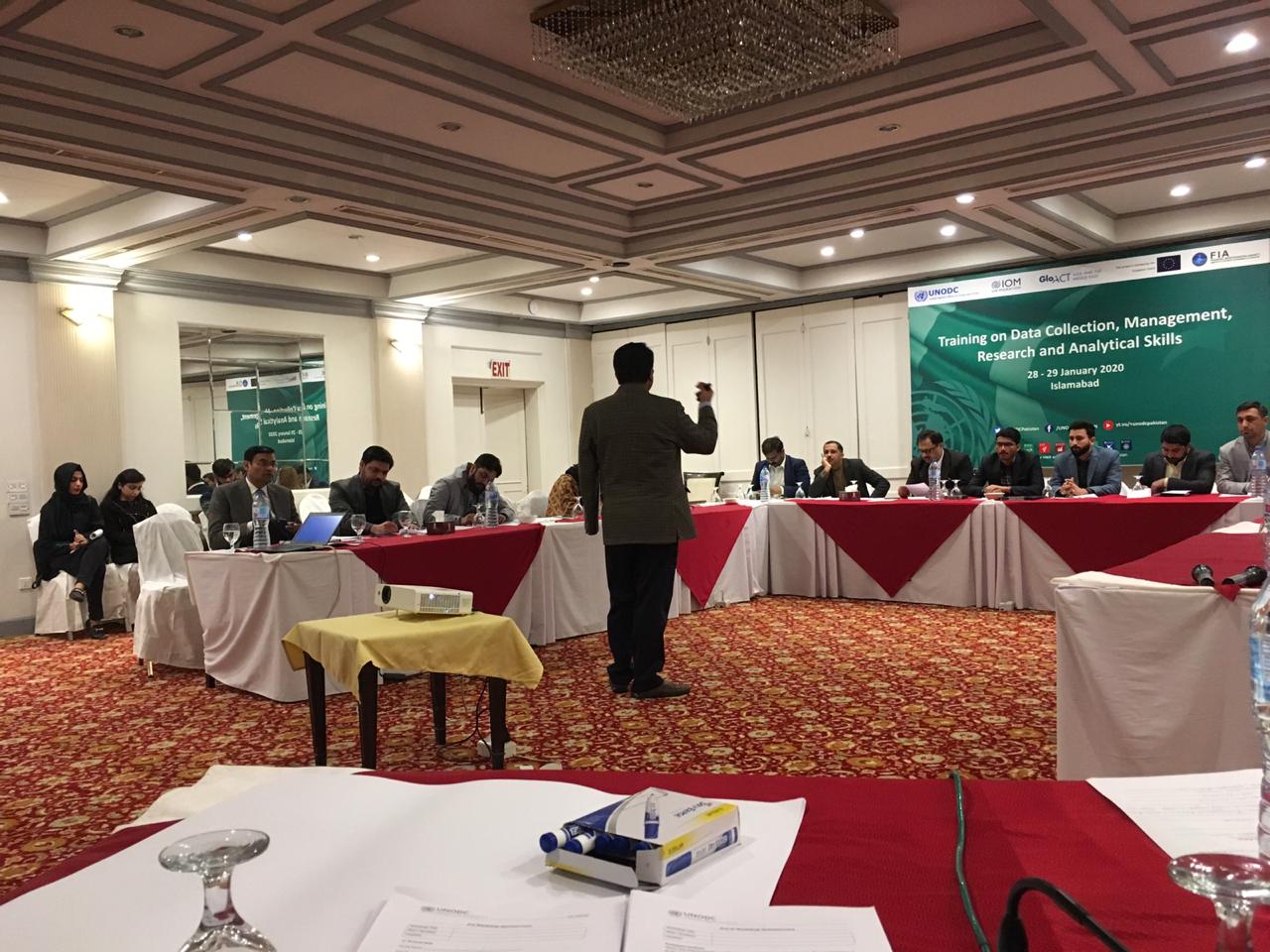 The first day of the training comprised of three main sessions on HTMS (Human Trafficking and Migrant Smuggling), introduction to data collection and TIP/SOM analysis. The second day was more activity oriented and focused on the Indicators for TIP/SOM data collection through group work, ensuring high levels of interaction. A lot of valuable comments, challenges and recommendations were shared by the participants and the exercises allowed them to quickly apply what they had learned during the training sessions. They shared that training helped to establish a clear distinction between human trafficking and migrant smuggling by relating them to the 2018 laws. The type of data that should be collected, its usefulness, importance of gender-segregated data and characteristics of good data were also explained. Furthermore, the trainer outlined the global trends in TIP/SOM to help understand the persistent and emerging patterns of the crime.

When asked about the workshop, one of the participants said, "The topic under discussion,the 2018 Prevention of Trafficking in Persons Act and Smuggling of Migrants Act, is not commonly discussed. We got a chance to learn more about it and we hope to involve our department and other government offices in working on this basis in the future. " Participants also pointed out that lack of infrastructure, skills and lack of coordination among relevant law enforcement agencies and officials is a key challenge in collecting and managing data. Lack of trust in law enforcement agencies was also flagged as a concern, meaning that victims frequently do not come forward to report perpetrators which, in turn, negatively impacts reliable and accurate data collection. Pre/post workshop tests were also conducted to assess existing knowledge and the progress made by the participants.

The Global Action against Trafficking in Persons and the Smuggling of Migrants - Asia and the Middle East ( GLO.ACT-Asia and the Middle East) is a four-year (2018-2022), €12 million joint initiative by the European Union (EU) and the United Nations Office on Drugs and Crime (UNODC) being implemented in partnership with the International Organization for Migration (IOM) in up to five countries: Islamic Republic of Afghanistan (Afghanistan), Islamic Republic of Iran (I.R. of Iran), Republic of Iraq (Iraq), Islamic Republic of Pakistan (Pakistan). The project builds on a global community of practice set in motion in GLO.ACT 2015-2019 and assists governmental authorities and civil society organizations in targeted, innovative and demand-driven interventions: sustaining effective strategy and policy development, legislative review and harmonization, capability development, and regional and trans-regional cooperation. The project also provides direct assistance to victims of human trafficking and vulnerable migrants through the strengthening of identification, referral, and protection mechanisms.