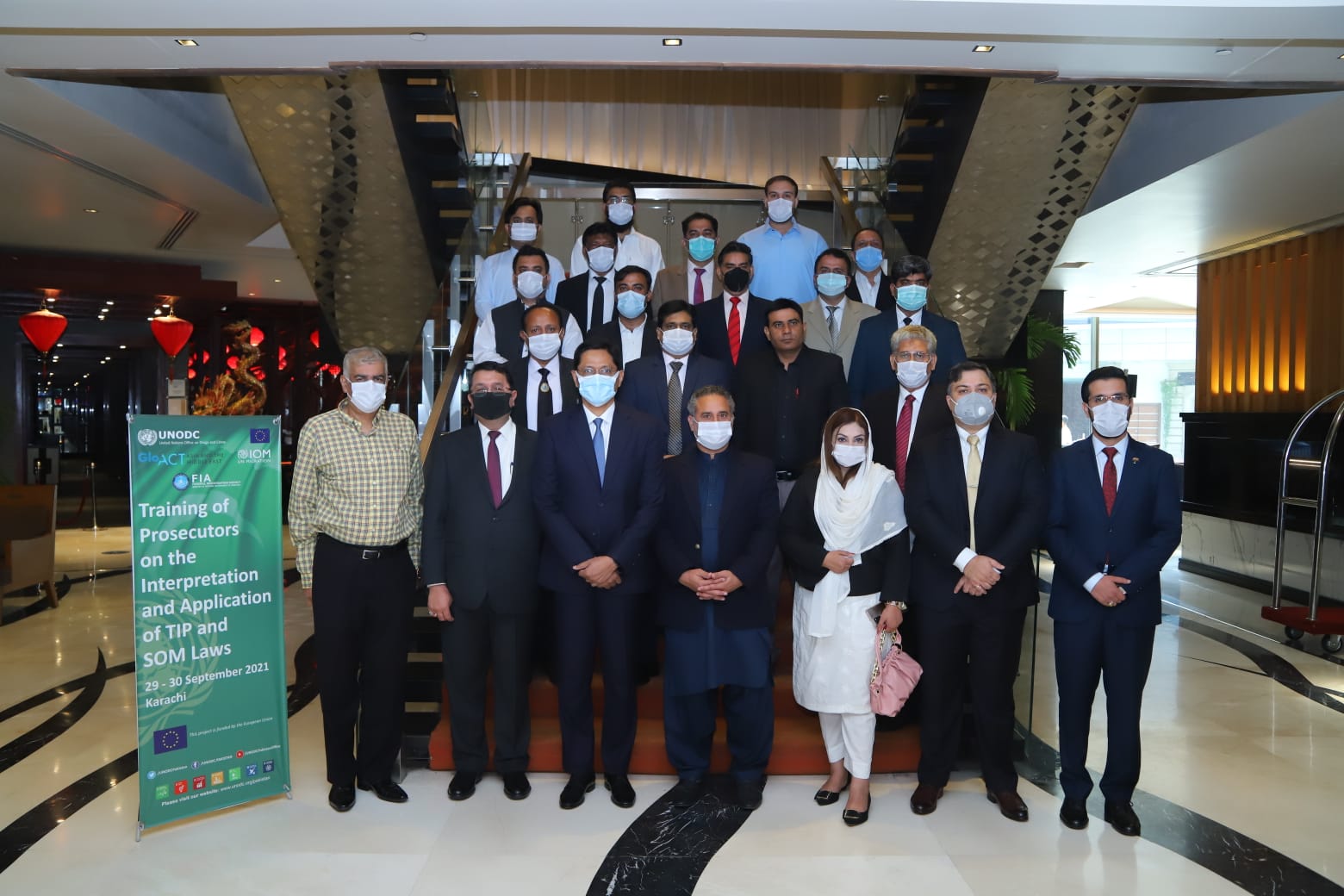 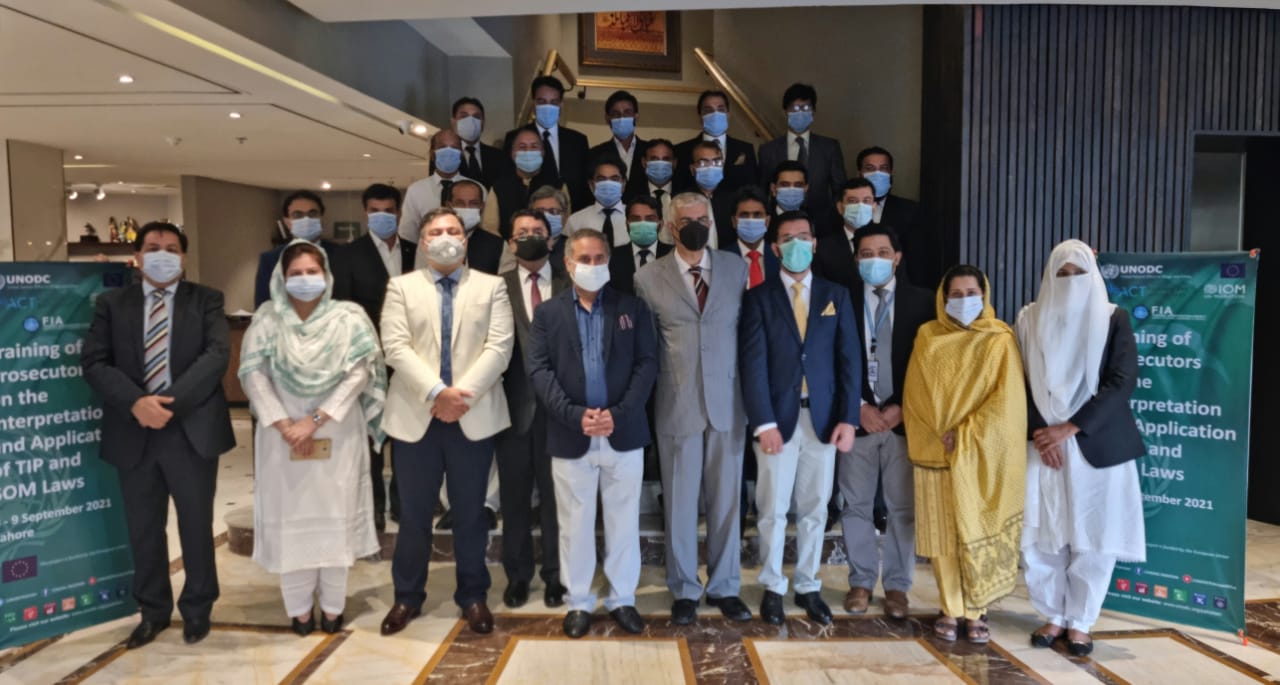 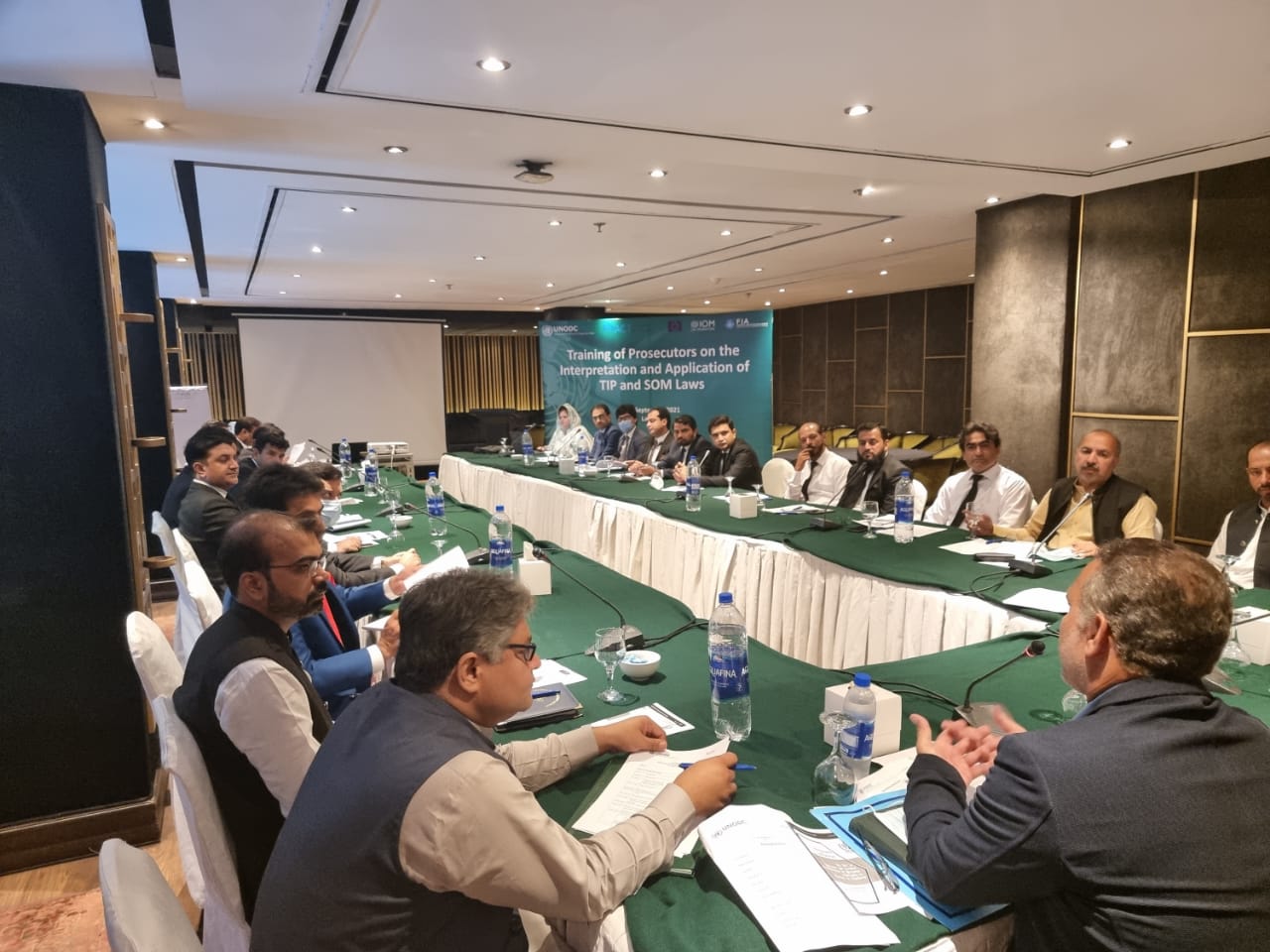 Karachi, Pakistan, 7 October 2021 - UNODC, under the framework of GLO.ACT Asia and the Middle East concludes its three-part prosecutor training series in Karachi. The training series focused on the interpretation and application of Trafficking in Persons (TIP) and Smuggling of Migrants (SOM) laws in Pakistan, and 20 officials (17 male, 3 female) from Balochistan and Sindh Province participated in the workshop held from 29 to 30 September 2021.

Going beyond the capital is a priority under GLO.ACT and engaging with participants in the provincial capitals underpins this goal. The workshops enhanced the participants' knowledge regarding national laws and familiarized them with the essential international legal instruments, frameworks, and case laws related to both crimes. The provincial workshops also served as a knowledge-sharing platform where legislative and prosecution experts guided the officers on completing TIP and SOM cases and preparing cases for trials.

In his keynote address, Amir Farooqi, Director of the Federal InvestigationAgency (FIA), Karachi, thanked UNODC for the initiative and urged the participants to take maximum benefit from the workshop. He said that knowledge of the best practices is vital against organized crimes. He further added that TIP and SOM laws are relatively new and mandated to tackle these crimes effectively. He concluded by saying, "Through such workshops, we have greater opportunities to collaborate and coordinate with each other."

Sardar Zaheer Ahmed, Director Anti-Human Smuggling FIA, explained the awareness-raising strategy of the FIA and highlighted the importance of having a session with the prosecutors. He said, "Being the lead agency, it's our responsibility to sensitize relevant stakeholders regarding TIP and SOM laws and the preceding rules. In collaboration with UNODC, the FIA has held several training workshops and sessions with Law Enforcement Agencies, Bar Councils, academia, and civil society. This was the first time we reached out to the prosecutors and received a positive and encouraging response. Our focus is to achieve two-pronged results. First, to make people aware about human trafficking and migrant smuggling and second to have a collaborative response to address these crimes."

The workshops were facilitated by legislative, prosecution, and migration experts. Through presentations, group work, experience sharing, and open discussions, the participants were able to enhance their understanding of the critical difference between the crimes, learned the application of the enacted laws, and discussed current practices in prosecuting TIP and SOM. Participants also received guidance from the experts about the challenges and issues related to trials. The participants were also able to investigate different trafficking-related judgments and case laws of other countries.

Upon conclusion of the workshop, two participants stated that:

"I am glad that I was part of a great learning platform. The workshop was very interactive, and all participants were given equal opportunities to share their experiences and challenges. The trainers did their best to clarify the confusion related to the application of the TIP law."

"Before the training, I had limited knowledge about the applicability of the TIP and SOM Acts in trafficking cases. Now my understanding has improved. I think I will be able to apply this to my work, and I will try to share the knowledge and learning from this workshop with my colleagues. "

All the three training workshops emphasized the following main points:

Overall, 64 officials (52 male, 12 female) were trained through the three-part series. The participants were from FIA and the Prosecution Department of Khyber Pakhtunkhwa, Punjab, Sindh, and Balochistan. The first training was conducted in August 2021, which included participants from Khyber Pakhtunkhwa and Islamabad. The latter two were held in provincial capitals of Punjab and Sindh Province, i.e., Lahore and Karachi, respectively.

The Global Action against Trafficking in Persons and the Smuggling of Migrants – Asia and the Middle East (GLO.ACT-Asia and the Middle East) is a four-year, €12 million joint initiative by the European Union (EU) and the United Nations Office on Drugs and Crime (UNODC) being implemented in partnership with the International Organization for Migration (IOM) in up to five countries: Islamic Republic of Afghanistan (Afghanistan), Islamic Republic of Iran (I.R. of Iran), Republic of Iraq (Iraq), Islamic Republic of Pakistan (Pakistan). GLO.ACT-Bangladesh is a parallel initiative also financed by the EU and implemented with IOM.