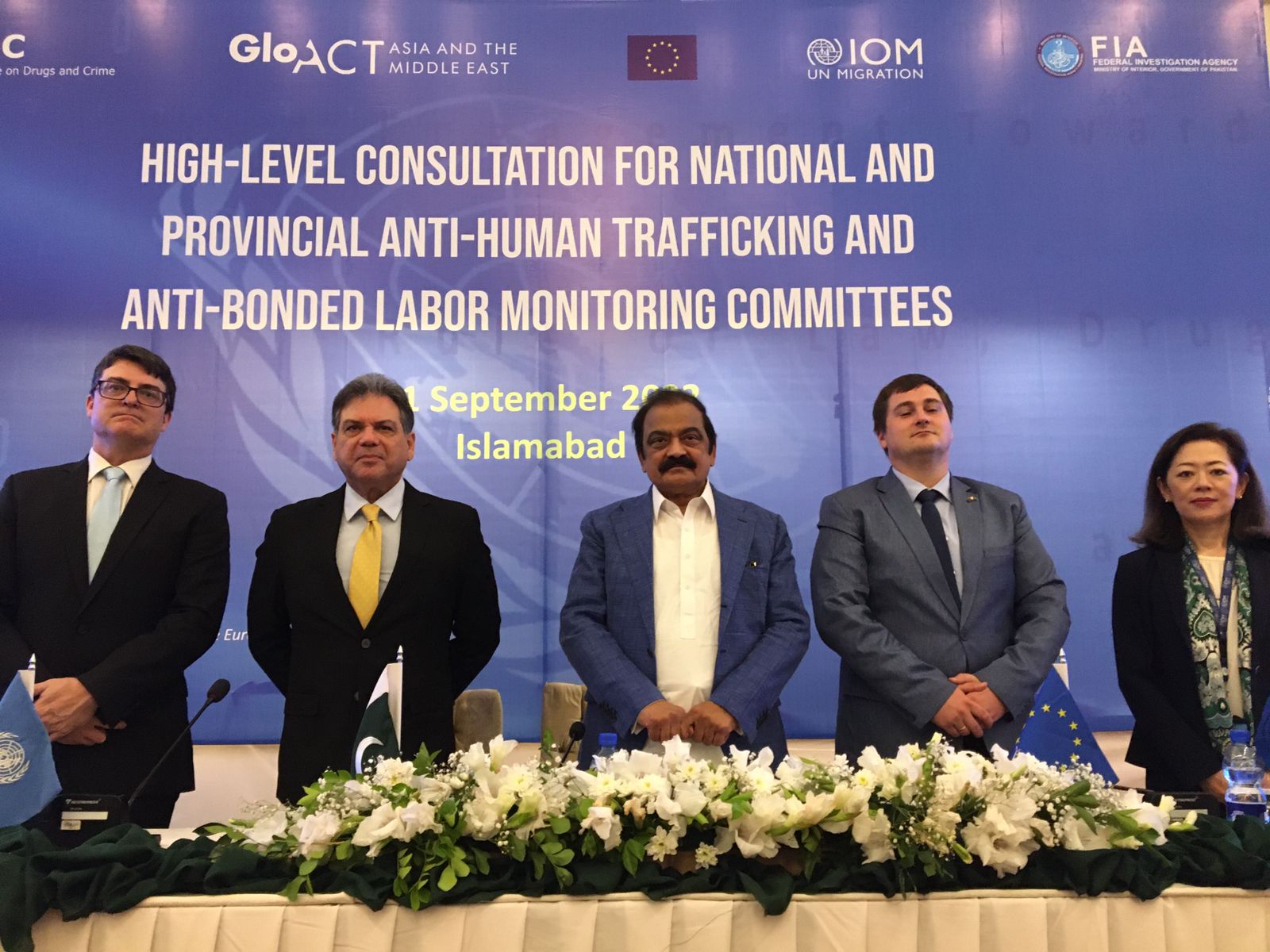 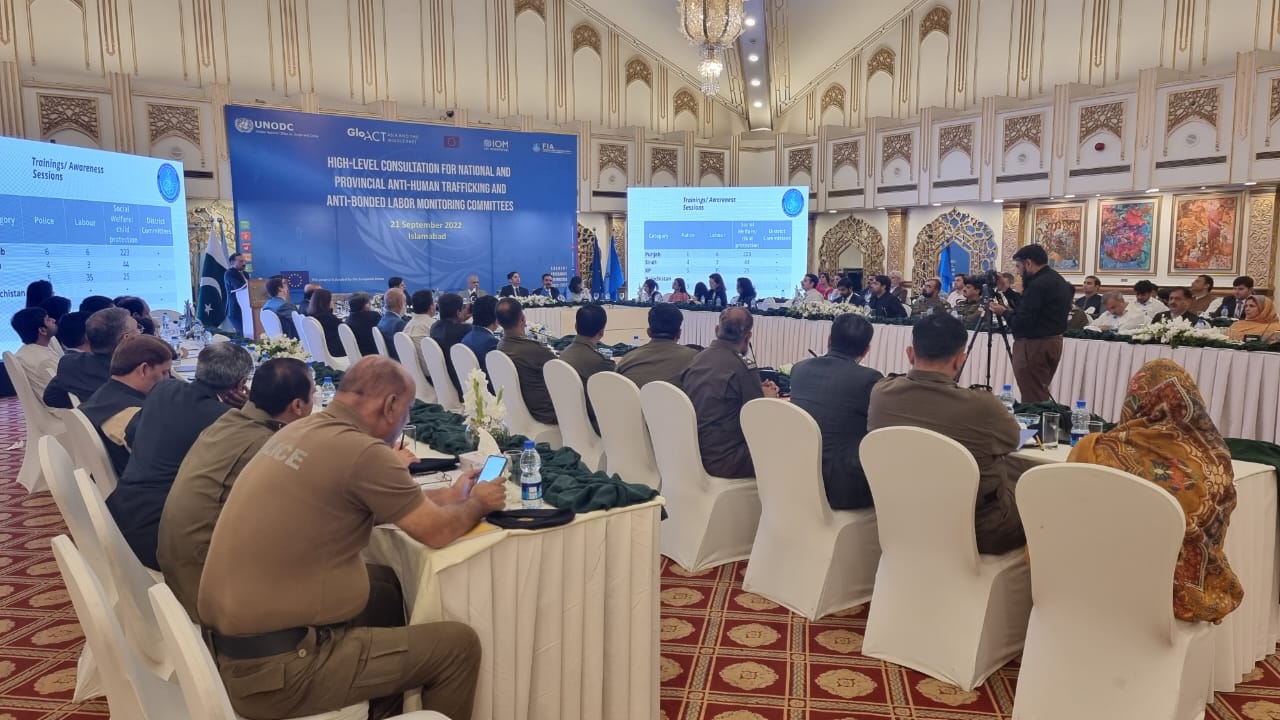 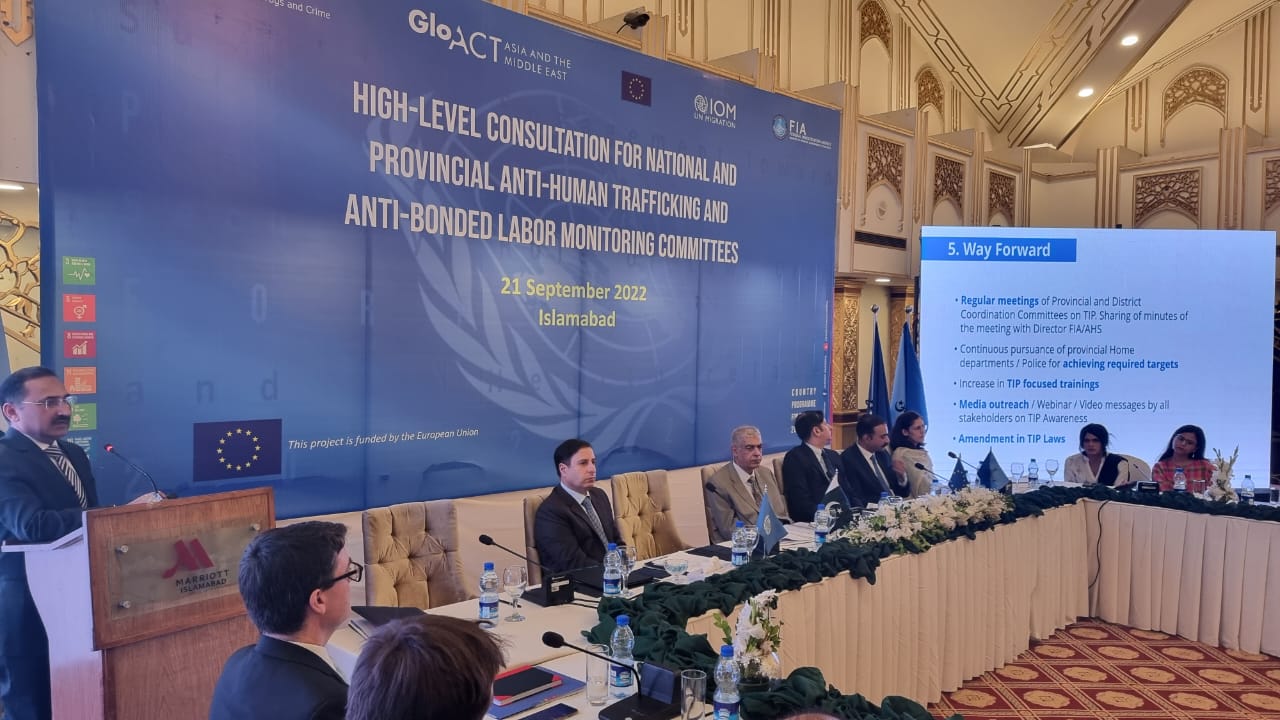 Islamabad, Pakistan 23 September 2022: Consultations and coordination with stakeholders are important in developing successful public policies and building effective preventive mechanisms to counter organized crimes, especially Trafficking in Persons and Smuggling of Migrants. UNODC, in collaboration with the Federal Investigation Agency (FIA), under the EU-funded GLO.ACT - Global Action to Address Trafficking in Persons and the Smuggling of Migrants (GLO.ACT – Asia and the Middle East), organized a high-level consultation workshop for national and provincial anti-human trafficking committees on 21 September 2022. During the workshop, coordination and understanding of the distinction between trafficking, irregular migration, and smuggling of migrants were well brought out in the consultation.

Addressing the participants, Dr. Jeremy Milsom, Representative UNODC Country Office Pakistan, said, “Curbing human trafficking and migrants smuggling requires a coordinated response at all levels. Realizing this fact, the government of Pakistan notified provincial and district-level TIP coordination committees earlier this year. We, as UNODC, are very pleased with this action by Pakistan and commend the efforts. We hope that there would be great coordination and synergy amongst all the stakeholders and that the activities will be conducted in a coordinated matter at all levels, including Federal, Provincial, and District levels.”

Meanwhile, Mohsin Hassan Butt, Director-General FIA during his speech stated that, “We are improving our identification of potential victims and offering greater support to those who are victims of this abhorrent crime. Trafficking is a gross violation of a person’s basic rights and dignity and disproportionately affects the most vulnerable, especially women and children. We are working jointly with UNODC and the European Union to enhance support to the victims of trafficking and vulnerable smuggled migrants. Our National Action Plan to combat human trafficking and migrant smuggling is victim-centered and addresses the related gaps”.

GLO.ACT project implementing partner IOM was represented by Mio Sato, Chief of Mission, IOM Pakistan, who congratulated the Government of Pakistan and the FIA for adopting comprehensive counter-trafficking measures, that are also in line with the 2030 Agenda for Sustainable Development and Global Compact for Safe, Orderly and Regular Migration (GCM). She added that “It is critical to strengthen partnerships and collaboration amongst local and national stakeholders to ensure efforts are sustainable and holistic. As implementing partner for the GLO.ACT project, IOM has been supporting the FIA on strengthening response on victim protection and assistance and remains available to extend full support to the national, provincial and district-level anti-trafficking committees”.

Speaking on behalf of the European Union, Eric Hahn, European Migration Liasion Officer of the EU Delegation to Pakistan said “As part of the EU Strategy on Combatting Trafficking in Human Beings 2021-2025, we are committed to stepping up cooperation with countries of origin and transit. This is crucial to ensure a comprehensive approach that includes demand reduction, law enforcement and criminal justice response, and assistance and support to victims, in line with priorities that apply inside and outside the EU. Through our initiatives like GLO.ACT, we encourage capacity building, prevention, protection of victims, and the dismantling of criminal networks”.

Minister for Interior Rana Sana Ullah Khan said, “The government has a strong political will and commitment to move forward with the work against trafficking in persons.  The FIA has already developed a National Action Plan against Trafficking in Persons and Smuggling of Migrants (2021–2025) which aims to promote the detection of trafficking in persons and smuggling of migrants, improve the position of victims and intensify the enforcement of criminal liability.

During the comsultation, The minister urged the FIA and other provincial bodies to work in closer coordination with each and UNODC to achieve the objective of eliminating human trafficking from Pakistan.

In the second half of the consultation workshop, a panel discussion took place which was lead by a senior lawyer, Taymur Ali Khan along with Javed Akbar Riaz, Director Anti Human Smuggling, FIA, who in his presentation briefed the participants on TIP and Smuggling of Migrants (SOM) Acts, their rules and terms of references of the provincial and district level committees. Representatives and subject matter specialists from FIA, the Punjab police, academia, the legal fraternity, and civil society Ooganizations shared their views and responded to questions of the workshop participants.

In her remarks, Asiya Arif, Executive Director, Society for the Protection of Rights of Children (SPARC) highlighted the importance of civil society in supporting the implementation of national policies. She said. “I am glad to see that role of civil society is gradually emerging. There were times in the past when one could see civil society was not engaged in matters; however, it is very positive to see that NGOs and other organizations are now becoming part of such government efforts. It is very important to acknowledge the existence and valuable role of civil society in supporting efforts like combatting Trafficking in Persons ”. Ms. Asiya stressed strengthening coordination between LEAs and government welfare, other protection departments and civil society organizations to improve victim assistance. The Executive Director of SPARC urged LEAs to monitor virtual platforms to ensure the prevention of TIP and emphasized developing a gender-inclusive strategy and establishing solution-oriented referral pathways to ensure the provision of assistance to victims, especially women and children.

The second-panel member, Dr. Athar Waheed (PSP), Director of Training, FIA, said, “TIP is a crime against humans. It is a process of dehumanization where persons, especially the disadvantaged, including women and children, experience and faces the worst forms of exploitation and abuse.” The director highlighted the importance of developing victim-centric response structures and establishing support mechanisms to ensure the provision of services for the victims of Trafficking in Persons. While emphasizing the importance of victim assistance, he said, “as a government institution and civil society organization, we need to ascertain which system is better and then move ahead with establishing and improving the relevant mechanisms and policies. In terms of making legal reforms and framework, we have made significant progress and heading in the right direction. In terms of taking care of victims and providing assistance, we must make collective efforts. The victim rehabilitation is a long-term process requiring commitment from all stakeholders, especially the service providers.”

The Director highlighted challenges, mentioning, “the first challenge for law enforcer is the victim identification. In certain cases, the victims get prosecuted – this criminalization is misconduct by law enforcement. Secondly, there is a lack of awareness about the TIP legislation. Law enforcement, especially the police, have started developing understanding; however, this should be considered an area requiring consistent efforts and improvement. Without knowledge about the TIP and in the absence of formal service delivery structures, there is a chance of re-victimization.”

The third panelist, Dr. Farhan Navid, Professor, University of Punjab, appreciated and acknowledged the efforts of UNODC, FIA, and state institutions in creating forums and establishing TIP committees at federal, provincial, and district levels. Dr. Farhan emphasized understanding the ground realities pertinent to TIP. He said, “TIP is a multi-faceted phenomenon. in Pakistan, different regions/areas have different forms of trafficking. The best strategy would be to keep the local context in view, learn from the situation,  and then develop a localized prevention plan, considerate to the ground needs and realities.”

Dr. Navid stressed the importance of having reliable TIP and SOM-related data. “In my view, right now, we don’t have reliable data. Although, FIA is working on developing comprehensive data set available for informed decision making.” Referring to the TIP report, he added, “Punjab is making significant progress in TIP and SOM; however, when it comes to the provision of services for the victims of trafficking, then perhaps the figures are alarming – only seven victims were provided support.  In my view, the victim assistance efforts are not properly reflected in the report. Social Welfare Organizations/departments, child protection bureaus and other government, as well as non-governmental organizations, are making significant progress in providing support to victims; however, it is not recorded properly, and so they are not able to share it.” Elaborating further, Dr. Navid highlighted lack of understanding regarding TIP and SOM and service delivery as common problems due to which data is not recorded properly. He said, “the organizations providing victim assistance do not realize the value of work they do.”

The fourth panelist, Mr. Nasir Satti (PSP), DIG Investigation Punjab, said, “After 2020, there was a realization in Punjab that the provincial departments and district level stakeholders needed to make coordinated efforts for combatting TIP in Punjab. We established provincial and district level committees and underwent a series of capacity-building initiatives supported by Police, UNODC as well as civil society organizations.’

At the end of the discussion, the panelists responded to the questions of the stakeholders belonging to law enforcement, UN agencies, media, academia, human rights activities, and civil society organizations- representing marginalized groups, including women, transgender, children, and refugees.

In his closing remarks,Ashraf Zubair Siddiqui, Additional Director General (ADG) – Immigration Federal Investigation Agency (FIA) said, “Visually partnership and cooperation are like the wheels that drive the moving vehicle of anti-trafficking and smuggling response. At the national level, cooperation among all relevant line departments, law enforcement, and civil society organizations with experience and expertise in assisting trafficked persons can help address a capacity gap in identifying victims of trafficking, providing protection and appropriate assistance to the victims, and prosecuting perpetrators.” The ADG urged participants to pay particular attention to human rights violations against trafficking victims and vulnerable smuggled migrants by working together to put in place a national referral mechanism that will help to identify victims and provide protection and assistance to them. He also emphasized the need to strengthen the prosecution of traffickers and smugglers.

The consultation was attended by senior representatives of the FIA, UNODC, the European Union, IOM and conveners, co-conveners, and members of Punjab provincial and district level committees, members from civil society organizations and NGOs involved in relevant fields, UNHCR, UNWOMEN, and ILO.

Pakistan says committed to working against Trafficking in Persons, has developed action plan