GLO.ACT-Bangladesh and the WARBE Development Foundation organize a consultation on migrant smuggling 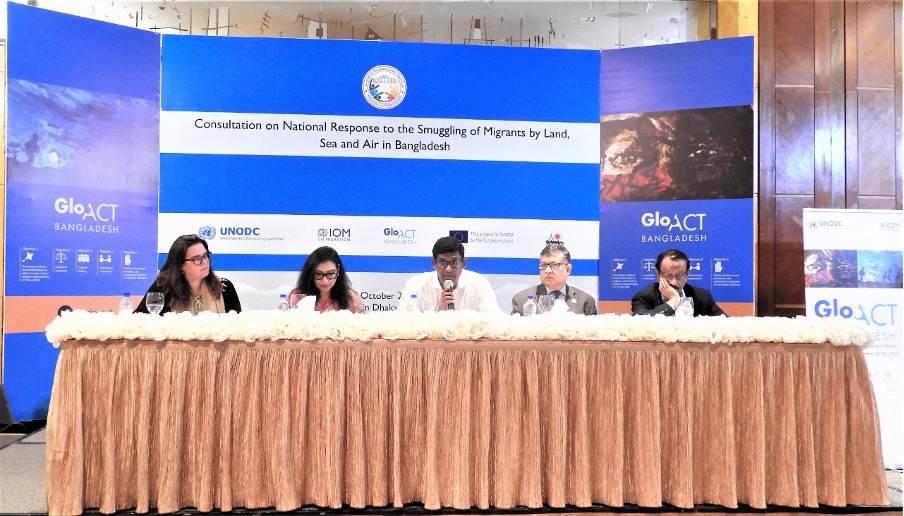 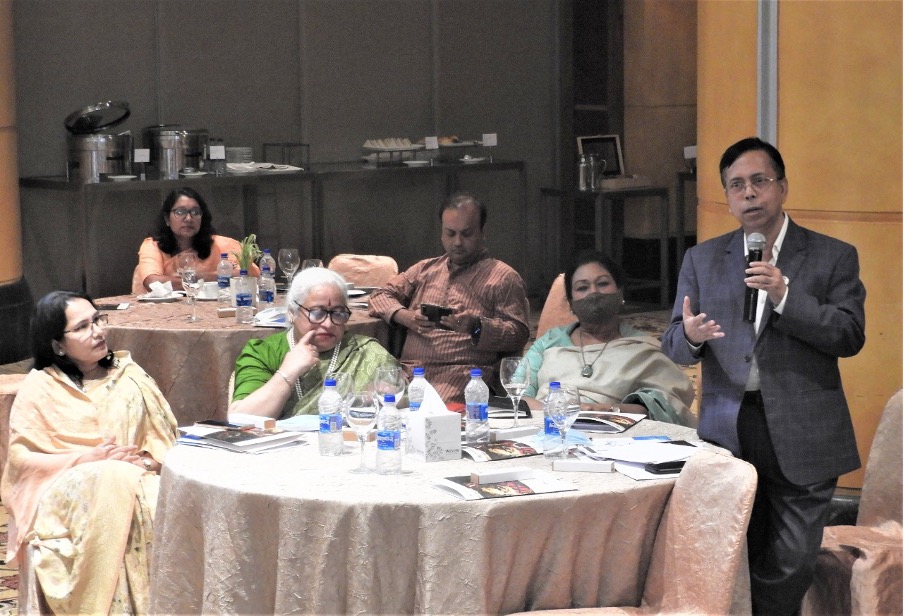 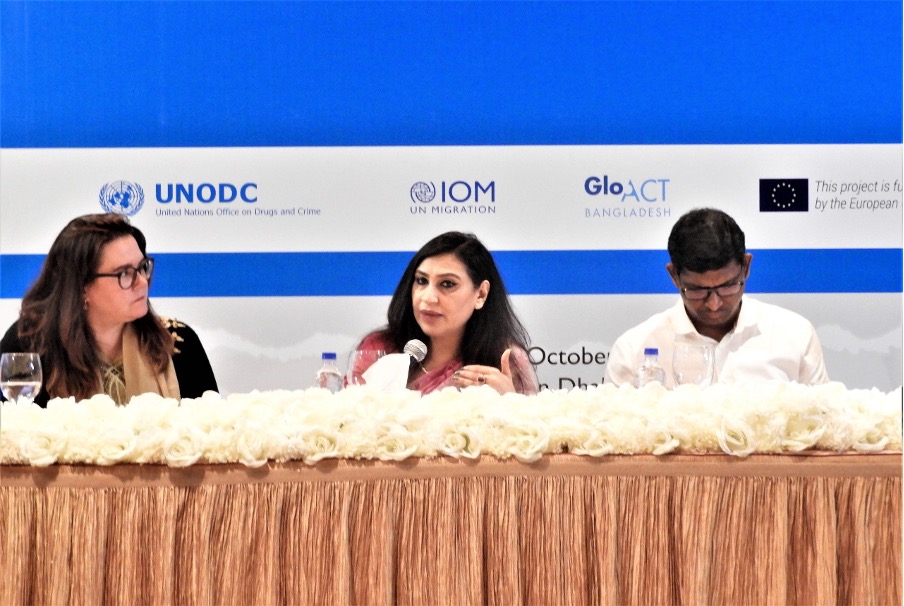 Dhaka, Bangladesh 13 May 2022 – Smuggling networks take advantage of and benefit from the lack of comprehensive legislation on the Smuggling of Migrants (SOM). Due to ill-defined and weak legislation, smugglers exploit existing loopholes and often operate with relative impunity. As far as smugglers are concerned, they are providing a service that is in great demand.

To address the legal framework on migrant smuggling in Bangladesh, UNODC, under the framework of the Global Action against Trafficking in Persons and the Smuggling of Migrants - Bangladesh (GLO.ACT-Bangladesh) and in partnership with the WARBE Development Foundation, facilitated consultation on a national response to the Smuggling of Migrants by Land, Sea and Air 7 October 2021. The consultation was held with members of the Parliamentarians Caucus on Development and Migration Bangladesh on 7 October 2021.

Barrister Shameem Haider Patwary, MP and Chairperson of the Caucus on Migration and Development, moderated the meeting. He underlined the need for continued cooperation and stated, "Migration and development are interlinked. Unfortunately, we have great economic disparity within our society, fueling the issue of migrant smuggling." He also spoke about recent successful developments regarding migration, including receiving and implementing a loan for returnee migrants.

Mahjabeen Khaled, Secretary-General, Parliamentarians Caucus on Migration and Development, Bangladesh National Parliament, highlighted that Bangladesh began looking for ways to include parliamentarians in 2014. She described the Caucus as a group of very active, progressive, and vocal politicians who advocate for the rights of migrant workers. Meanwhile, Syed Saiful Haque, Chairman, WARBE Foundation, reminded participants that Bangladesh is a champion country of the Global Compact for Safe, Orderly and Regular Migration and reiterated the need to find ways to partner with UNODC on countering migrant smuggling.

A brief overview of the GLO.ACT-Bangladesh project was presented by Mahdy Hassan, National Project Coordinator of GLO.ACT-Bangladesh, who shared the findings of a previous webinar on the Mediterranean Crisis: Situation and Trend organized by the Bangladesh United Nations Network on Migration. Referring to IOM data of IOM, Mr Hassan highlighted that Bangladeshi are the second largest group in Asia who are migrating to Europe.

Addressing the participants, Aimée Comrie, GLO.ACT Project Coordinator stated that UNODC is the guardian of trafficking in persons (TIP) and SOM protocols. She explained that while these two crimes are distinct, TIP and SOM often intersect. Speaking about the migration crisis in the Mediterranean Sea, she outlined the observations of GLO.ACT strategic paper for policy consideration: Towards a National Response to Smuggling of Migrants by Land, Sea and Air in Bangladesh. Concluding her remarks, she recommended criminalizing SOM and strengthening criminal justice system as a comprehensive response to counter the crime in Bangladesh.

Participants shared their opinions and suggestions on SOM during an active open discussion. Tanvir S Joy, MP, underlined the need for Parliamentarians to consult with their constituencies to find out why individuals opt for risky journeys and focus on building skill sets of workers based on specialization.

Acknowledging the grave consequences of smugglers using migrants as a tool for profit, Aroma Dutta MP remarked, “This phenomenon has a long history; it is only the nomenclature that has changed. Today I also joined the GLO.ACT-Bangladesh women network consultation, and I find a tremendous need to interact. Bangladesh can tackle cybercrime, and I suggest the parliamentarian caucus work with the Ministry of Foreign affairs to solve this issue by emphasizing bilateral understanding between the countries.”

Masud Bin Momen, Foreign Secretary (Senior Secretary) of the Ministry of Foreign Affairs, meanwhile said, "I commend the leadership of Her Excellency Prime Minister Sheikh Hasina, who gives the highest priority to the expatriates' welfare. Under her leadership on migration governance, Bangladesh has taken a whole community approach to the Global Compact on Migration. Bangladesh ratified CMW and is taking steps to achieve Sustainable Development Goal 10.7. The Government has also enacted the Overseas Employment and Migrants Act, 2013, and the Prevention and Suppression of Human Trafficking Act, 2012. I thank you all for your insightful feedback. In the post-COVID-19 era, our collective responsibility is to resolve this issue through awareness-raising and strong coordination between Government and civil society both internally and externally."