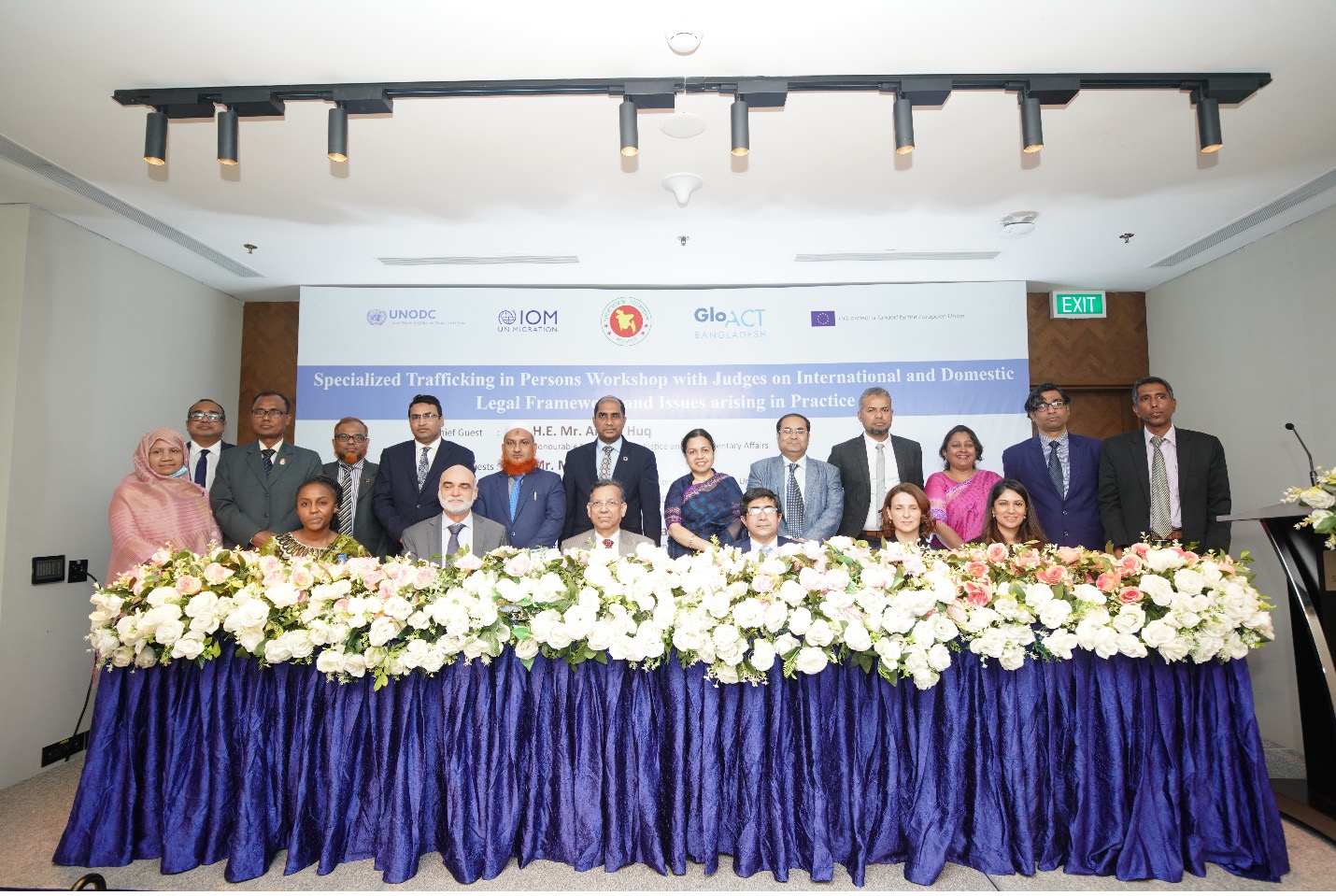 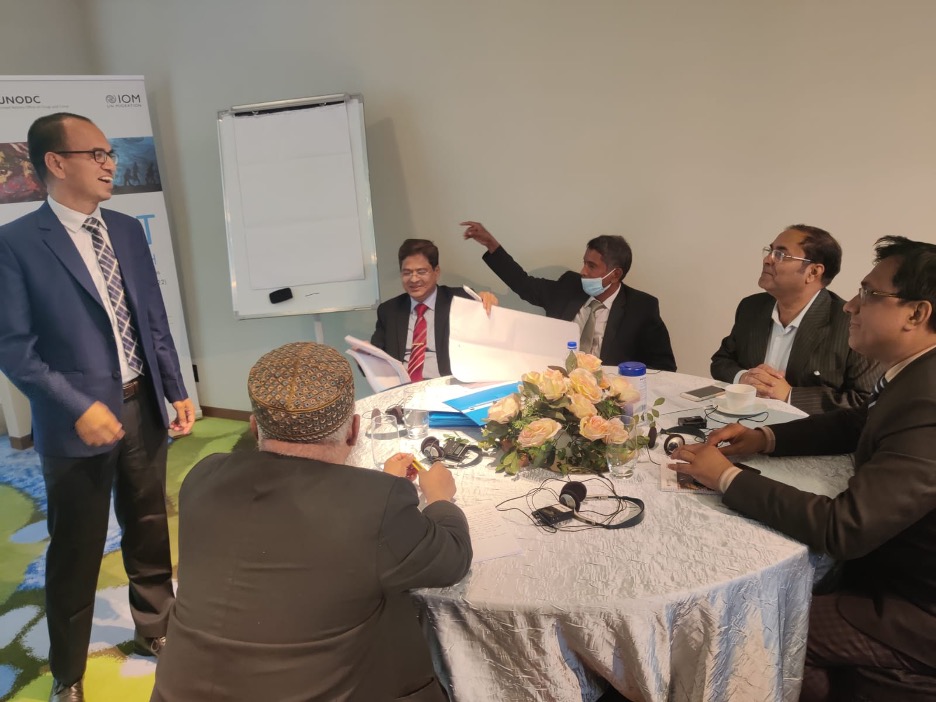 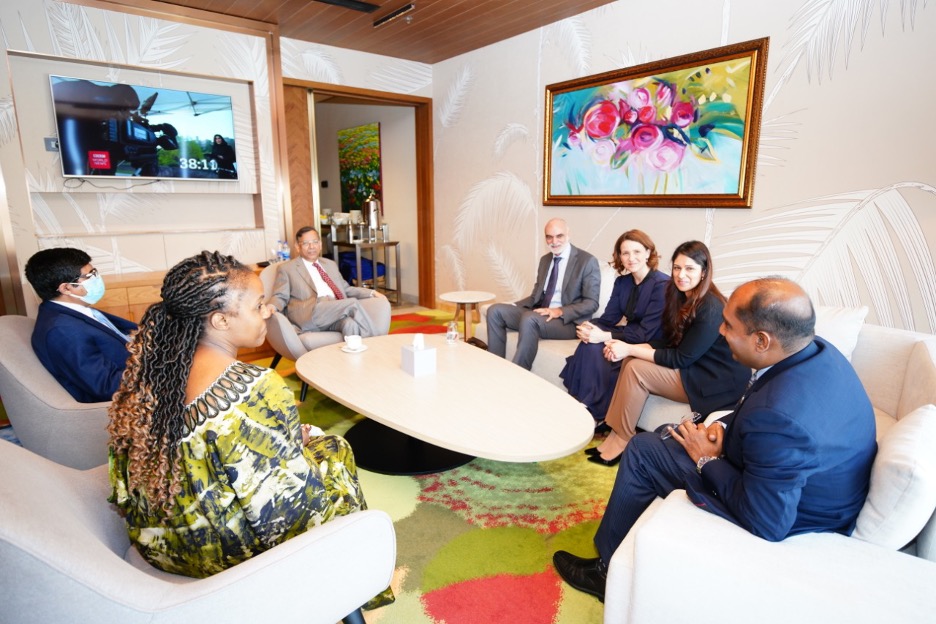 Dhaka, Bangladesh 13 May 2022 - UNODC, in partnership with the Ministry of Law, Justice and Parliamentary Affairs (MoLJPA) of Bangladesh, under the framework of the Global Action against Trafficking in Persons and the Smuggling of Migrants - Bangladesh (GLO.ACT-Bangladesh), organized a three-day capacity building workshop with 22 judges (4 female, 18 male) of the Anti-Human Trafficking Offence tribunals held from 13 to 15 March 2022. The workshop aimed to ensure a holistic engagement with the judiciary of Bangladesh for a strengthened national response to human trafficking and migrant smuggling. The workshop engaged judges due to their central role in adjudicating cases.

The inauguration ceremony of the workshop was opened by Samantha Munodawafa, UNODC GLO.ACT Policy Lead, who welcomed all guests and participants. She highlighted the enthusiasm of all the workshop facilitators, including visiting Judge Michelle Brewer and Judge Hina Rai from the First-tier Tribunal, Immigration and Asylum Chamber of the United Kingdom. Ms. Munodawafa underlined how their willingness to share their experience with the judges is a key element in combatting Trafficking in Persons (TIP).

Maurizio Cian, Head of Cooperation of the Delegation of the European Union to Bangladesh, stated, “Bangladesh and the EU are working together in the fight against trafficking in human beings. Trafficking in human beings is a terrible crime affecting disproportionally women and girls trafficked for sexual exploitation. I commend the Government of Bangladesh’s for its continuous effort and engagement leading to the substantial progress made in the recent years in tackling trafficking through the criminal justice system”.

Md. Golam Sarwar, Secretary, Law and Justice Division of the Minister for Law, Justice and Parliamentary Affairs (MoLJPA) underlined that, “Despite the pandemic, tribunals have disposed of a significant number of cases. In future, we hope to increase the number of tribunals to ensure speedy and effective adjudication of human trafficking cases across the country.”

Giving the address of the Chief Guest, Anisul Huq, M.P, Minister for Law, Justice and Parliamentary Affairs took the opportunity to highlight the devastating effect of human trafficking saying, “Trafficking in Persons and the Smuggling of Migrants are global challenges demanding a unified response and strong partnerships amongst all sectors. Human trafficking and the migrant smuggling cannot be solved by a single entity; rather it demands a cumulative effort from all sectors in Bangladesh. We believe that more holistic approaches are needed to strengthen legal measures and prosecution, ensure improved protection for those at risk, and, in the longer term, close the space open to human trafficking.”

During the closing ceremony, M.A. Awal, Judge of Anti-Human Trafficking Offence Tribunal, Khulna reflected, “The in-depth discussion on the national and international legal provisions on TIP was insightful. I would like to thank all the facilitators and UNODC for organizing sessions on important aspects of law”

The chair of the closing ceremony Md. Golam Sarwar then emphasized the role of the 7 Anti-Human Trafficking tribunals that have been established by the Government of Bangladesh and commended organizers and participants for a vibrant session.