GLO.ACT facilitates E-Judicial Colloquium to improve responses to human trafficking and migrant smuggling and render justice to its victims 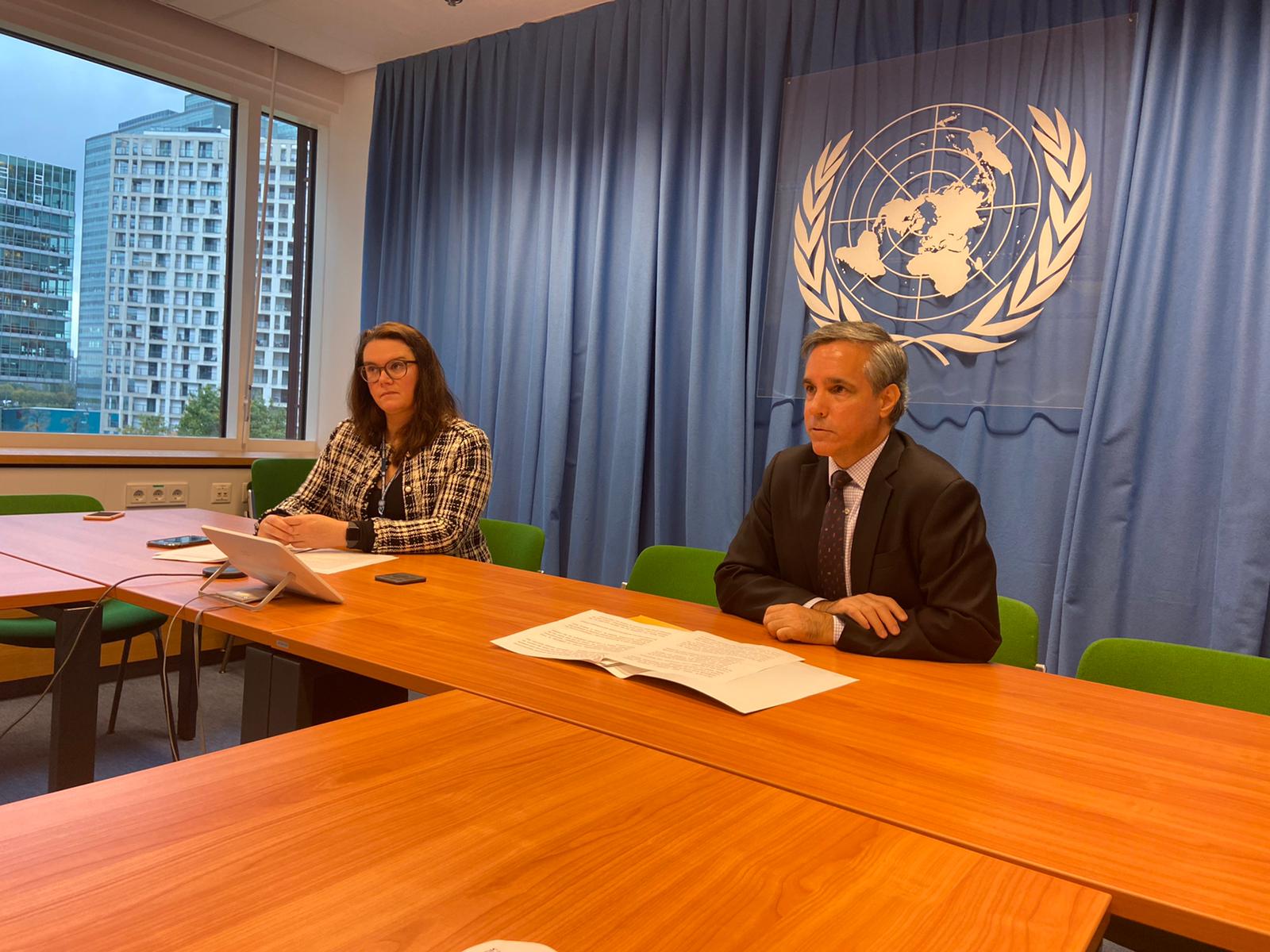 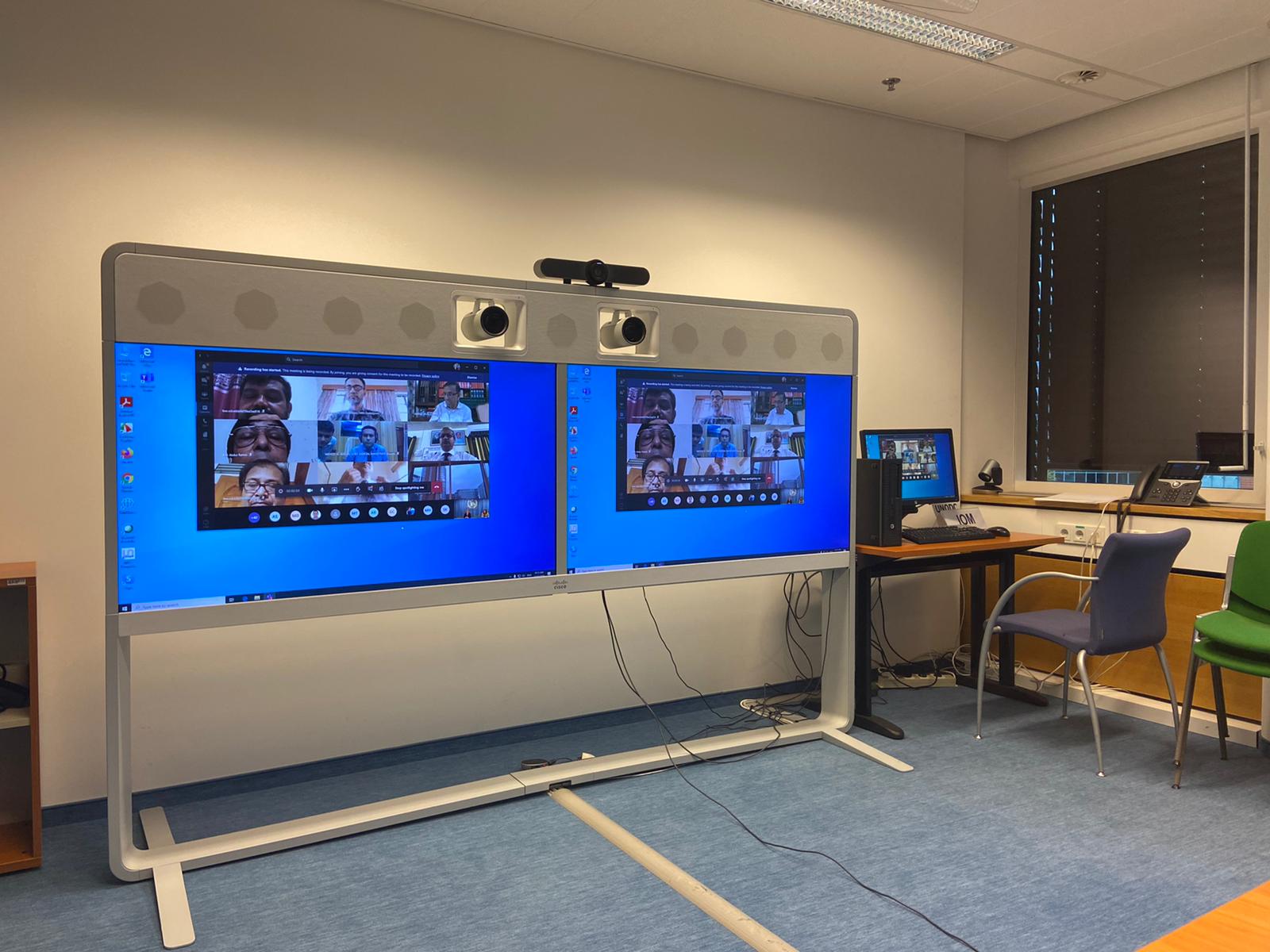 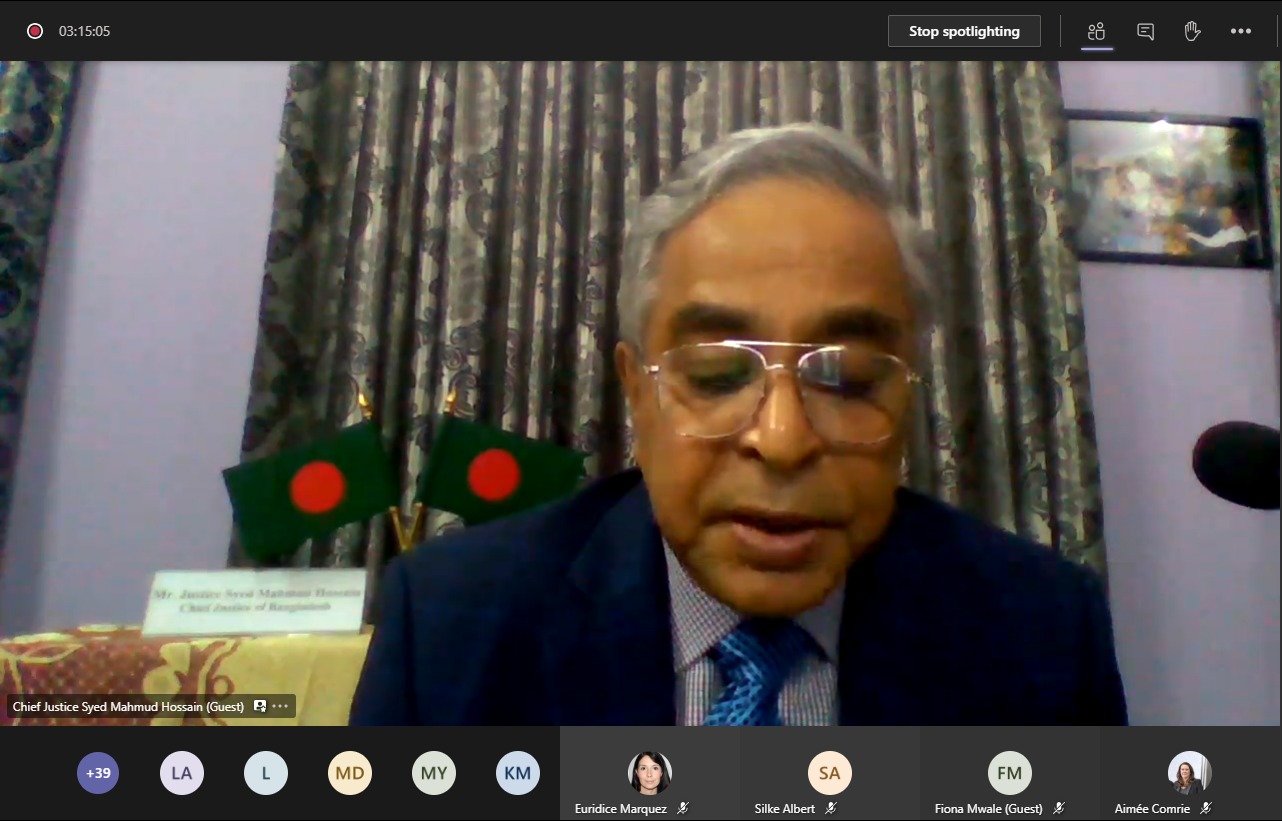 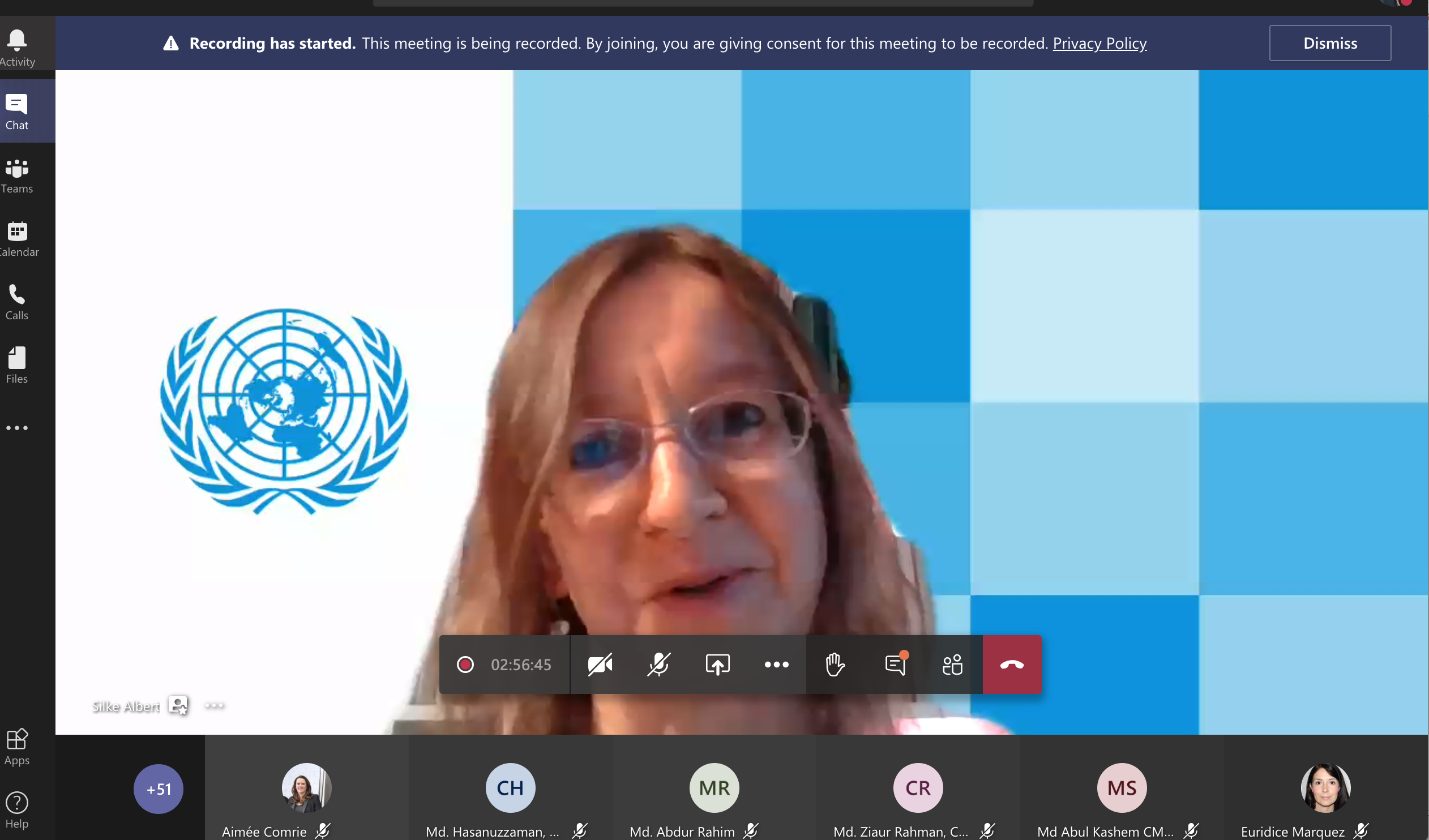 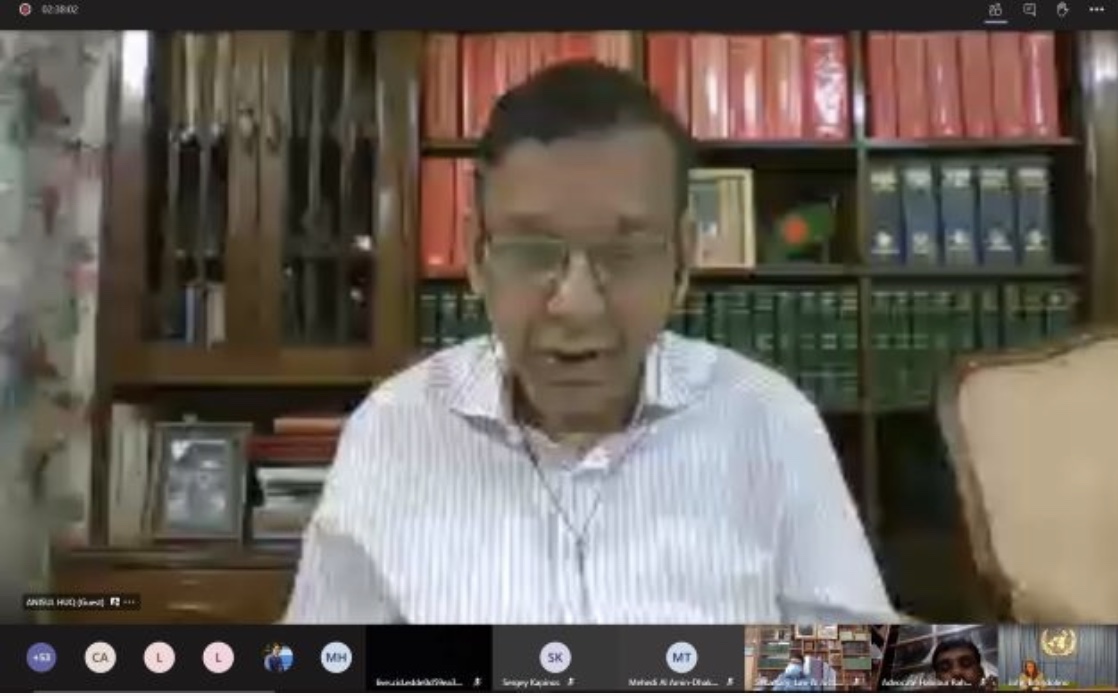 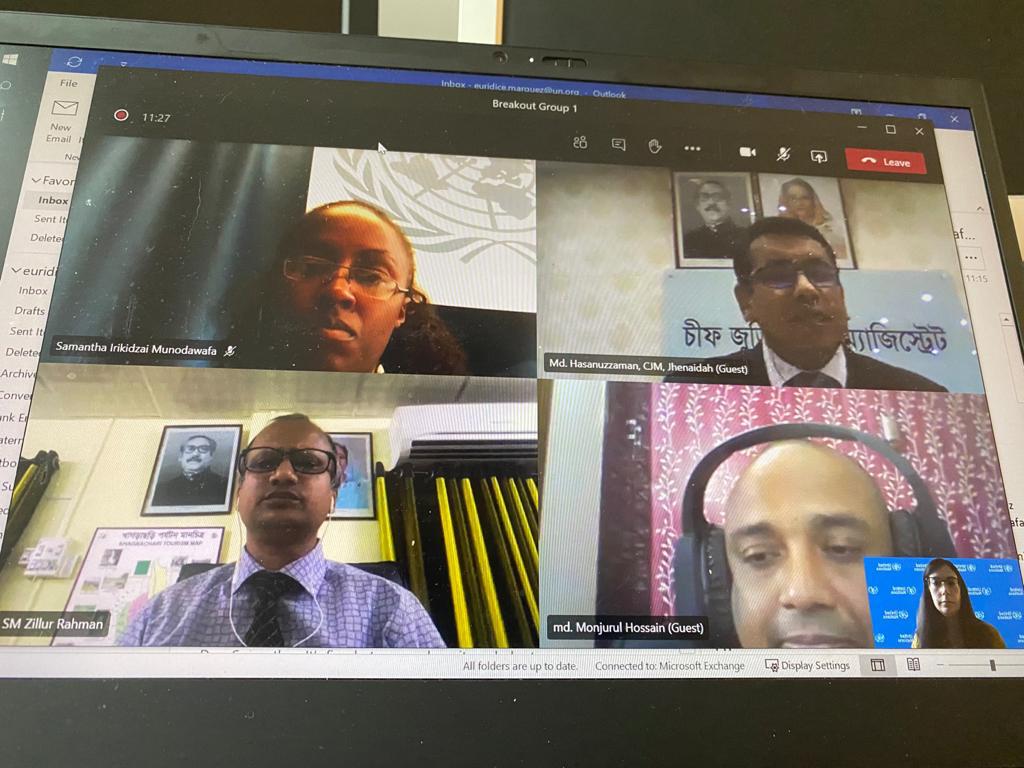 Dhaka, Bangladesh – 14 October 2020 -The Global Action against Trafficking in Persons and the Smuggling of Migrants – Bangladesh (GLO.ACT-Bangladesh) organized a two-day judicial colloquium on 13 and 14 October 2020 to address Trafficking in Persons  (TIP) and the Smuggling of Migrants (SOM). The E-Judicial Colloquium aims to enhance Bangladesh’s criminal justice response to transnational organized crime, in particular, human trafficking and migrant smuggling.

The E-Colloquium presented an opportunity to better understand the types of cases that are currently being brought before the courts and the quality of justice meted out. Participants included judges and prosecutors who, ideally but not exclusively, are working on the cases filed under the Prevention and Suppression of Human Trafficking Act, 2012, and the Overseas Employment and Migrants Act, 2013, or are working at the newly established Anti-trafficking Tribunals.

The colloquium was opened by Aimée Comrie, UNODC GLO.ACT Project Coordinator who warmly welcomed the participants and introduced John Brandolino, Director, Division for Treaty Affairs, UNODC who in his opening remarks explained that, “Encountering victims of trafficking in court settings presents unique evidential challenges. Platforms such as the present colloquium provide the opportunity for exchange and mutual learning on strategies that have been successfully applied by courts to address these evidential challenges, and useful resources for judicial officers.” During his welcoming remarks, Sergey Kapinos, Representative, UNODC, Regional Office for South Asia, commended the efforts made by the Government of Bangladesh in extending support to vulnerable populations, especially during the COVID-19 period.

Speaking on behalf of the EU, Rensje Teerink, Ambassador and Head of the Delegation of the EU to Bangladesh reminded participants during her intervention that, “those taking advantage of fellow human beings, especially women and girls, should be prosecuted to the full extent of the law.”

The floor was then passed to Md. Golam Sarwar, Secretary, Law and Justice Division, Ministry of Law, Justice and Parliamentary Affairs. “It is pertinent to mention that, without robust criminal justice responses, human trafficking and smuggling migrants will remain a low-risk, high profit activity for the criminals,” explained Mr. Sarwar and he went on to say that, “seven Anti-Human Trafficking Offence Tribunals have been established in seven divisional headquarters to render justice to the victims. The Law and Justice Division has appointed judges to those newly created tribunals to speed up the trial and ensure justice within shortest possible time.”

Giving the address of the Chief Guest, Anisul Huq, M.P, Minister for Law, Justice and Parliamentary Affairs also took the opportunity to highlight the impact of the COVID-19 pandemic and said, “The COVID-19 crisis and economic downturn are leaving more women, men and children at risk of being trafficked. Today’s judiciary colloquium is timely as evidence is mounting that the COVID-19 crisis has further increased vulnerabilities and compounded trafficking risk. The Government of Bangladesh would like to step up action to prevent exploitation in the COVID-19 crisis, to identify and support trafficking victims, and bring perpetrators to justice. I, therefore, welcome this event to end the impunity, protect the vulnerable and stop this crime.”

Following the opening segment of the colloquium, Mahdy Hassan, UNODC GLO.ACT National Officer provided participants with an overview of GLO.ACT-Bangladesh and of available international legal frameworks on TIP and SOM. The last session, led by Samantha Munodawafa, UNODC GLO.ACT Policy Lead was interactive in nature and focused on challenges and questions of law arising from TIP and SOM jurisprudence.

Day two of the E-Judicial Colloquium included guest presentations by Justice Fiona Atupele Mwale, Malawi Judiciary, Justice Syed Mahmud Hossain and Justice M. A. Awal. Justice Mwala took participants through a complex case that highlighted unique evidential challenges often associated with TIP cases such as translation/interpretation of witness statements. She spoke in detail about victim and witness issues such as language and cultural shock referencing the relevant parts of the Palermo Protocol. She concluded by stressing the importance of adequate preparation for TIP cases, including the need for law enforcement officers to receive adequate training and stressed the importance of appropriate victim management.

Justice Hossain spoke about Bangladesh’s criminal justice system and highlighted that national legalisation pertaining to TIP is relatively new. He explained that investigators and prosecutors are not yet cognisant enough on how to conduct high quality investigations. He spoke of the need for continuous capacity building for prosecutors, tribunal judges and the police. Justice Hossain also highlighted that COVID19 had severely impacted the ability of courts to processes cases.

During a Q&A session, participants spoke about the challenges of collecting evidence from abroad, stressing that without agreed mutual legal assistance it is very difficult to obtain evidence that is admissible in court. Eurídice Marquez, UNODC GLO.ACT Management Officer pointed out that UNODC had a range of mutual legal assistance tools that can be made available to all participants. Other participants also stressed the need for improved transnational and international cooperation to ensure justice can be rendered to victims.

The last presentation was provided by Justice M.A. Awal, who also stressed the complexities of obtaining reliable evidence from abroad and that this posed a great challenge. He referred to the seven Anti-Human Trafficking Offence Tribunals pointing out that no TIP case has been concluded yet as COVID-19 closed the courts. He went on to explain that witnesses and prosecutors are also reluctant to attend tribunals due to COVID-19. Following the guest presentations, smaller breakout groups were held to enable in-depth trafficking and smuggling case related discussions.

The colloquium concluded with a brief overview of UNODC’s counter-trafficking work and message of support provided by Silke Albert, Crime Prevention Expert, Human Trafficking and Migrant Smuggling Section UNODC, remarks by Ms. Justice Fiona Mwale, Malawi Judiciary and the address of the Chief Guest, Justice Syed Mahmud Hossain, The Chief Justice of Bangladesh. Concluding her statement, Justice Mwale said, “Atrocities suffered by victims of trafficking and vulnerable migrants at the hands of traffickers and smugglers shake the collective conscience and must never be allowed to go unaccounted for. It is our role as judicial officers to stand as gatekeepers as they seek greener pastures abroad.”

Following the e-judicial colloquium, GLO.ACT aims assemble a Compendium of TIP-related cases from Bangladesh, and a TIP Case Note Legal Brief to contribute and further improve the criminal jurisprudence in the area of TIP and SOM.

Media coverage of the event: