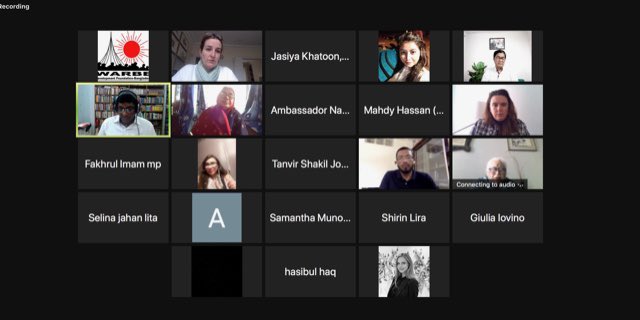 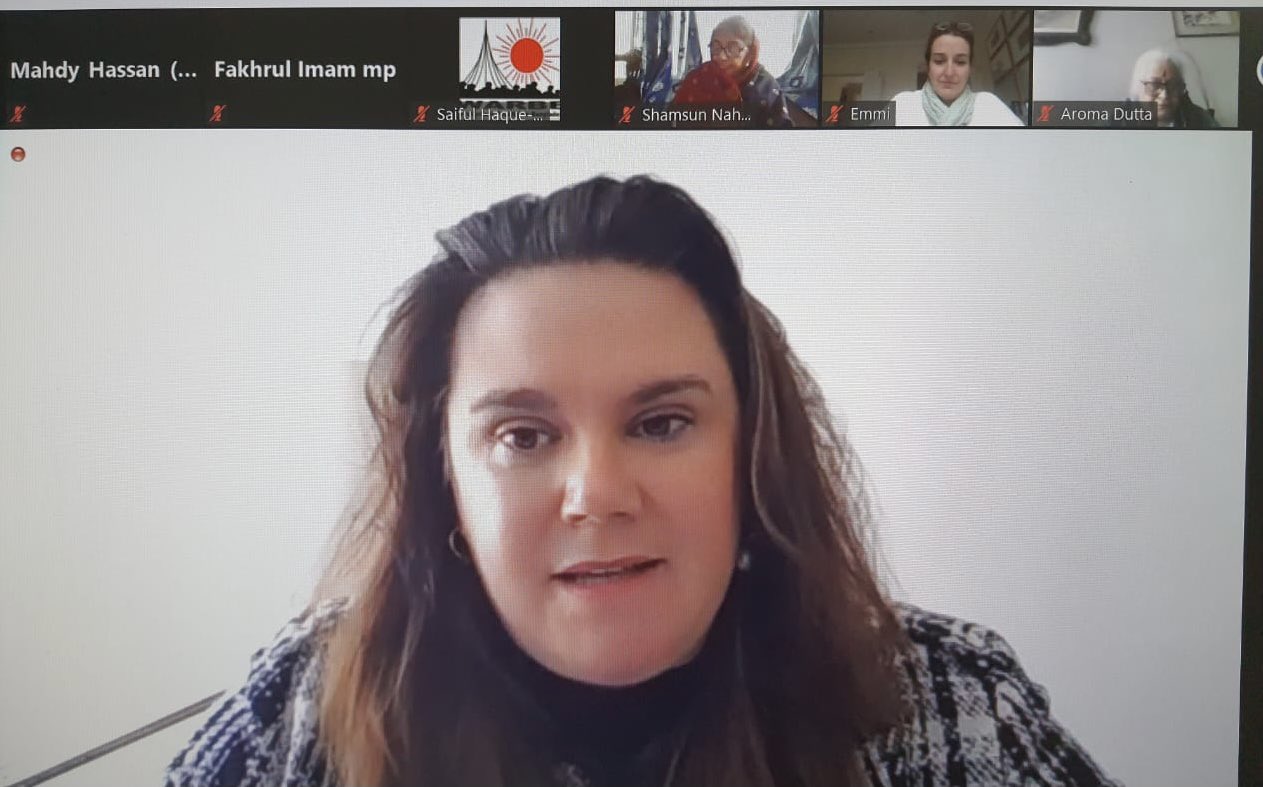 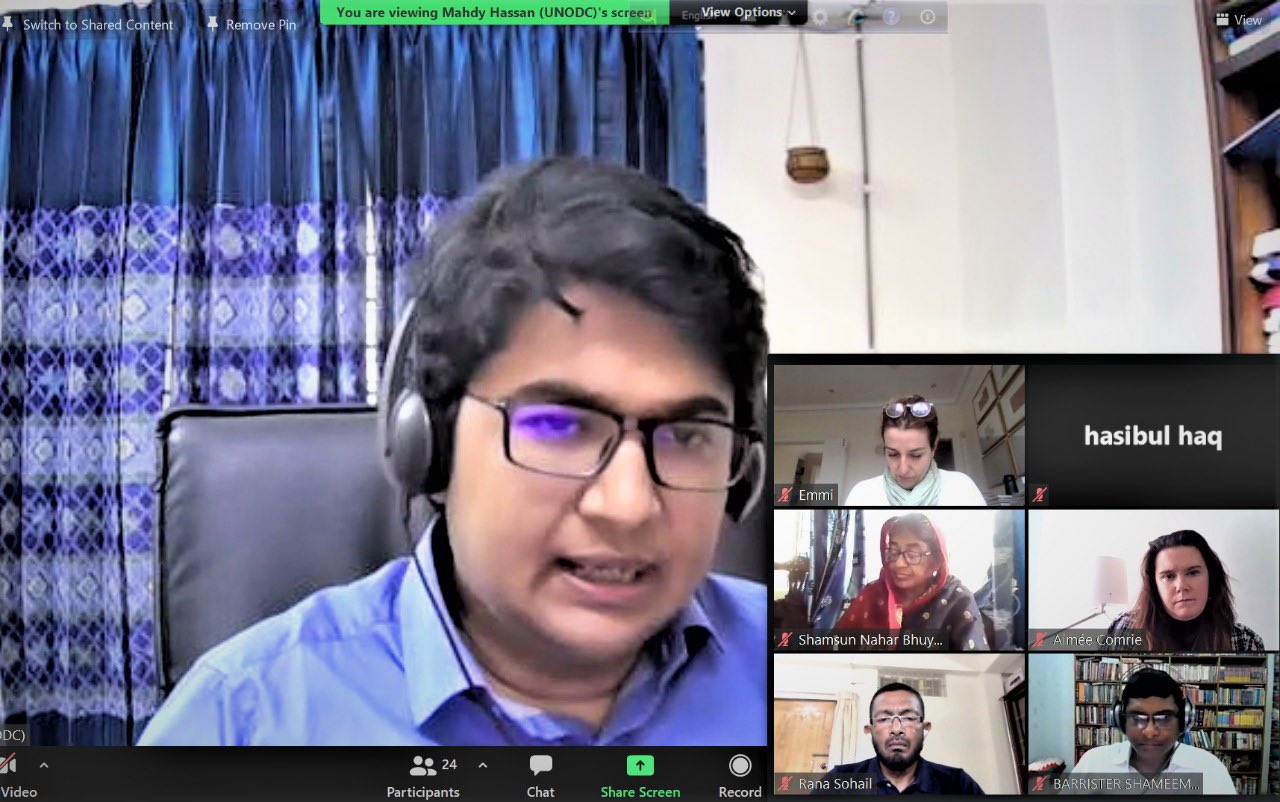 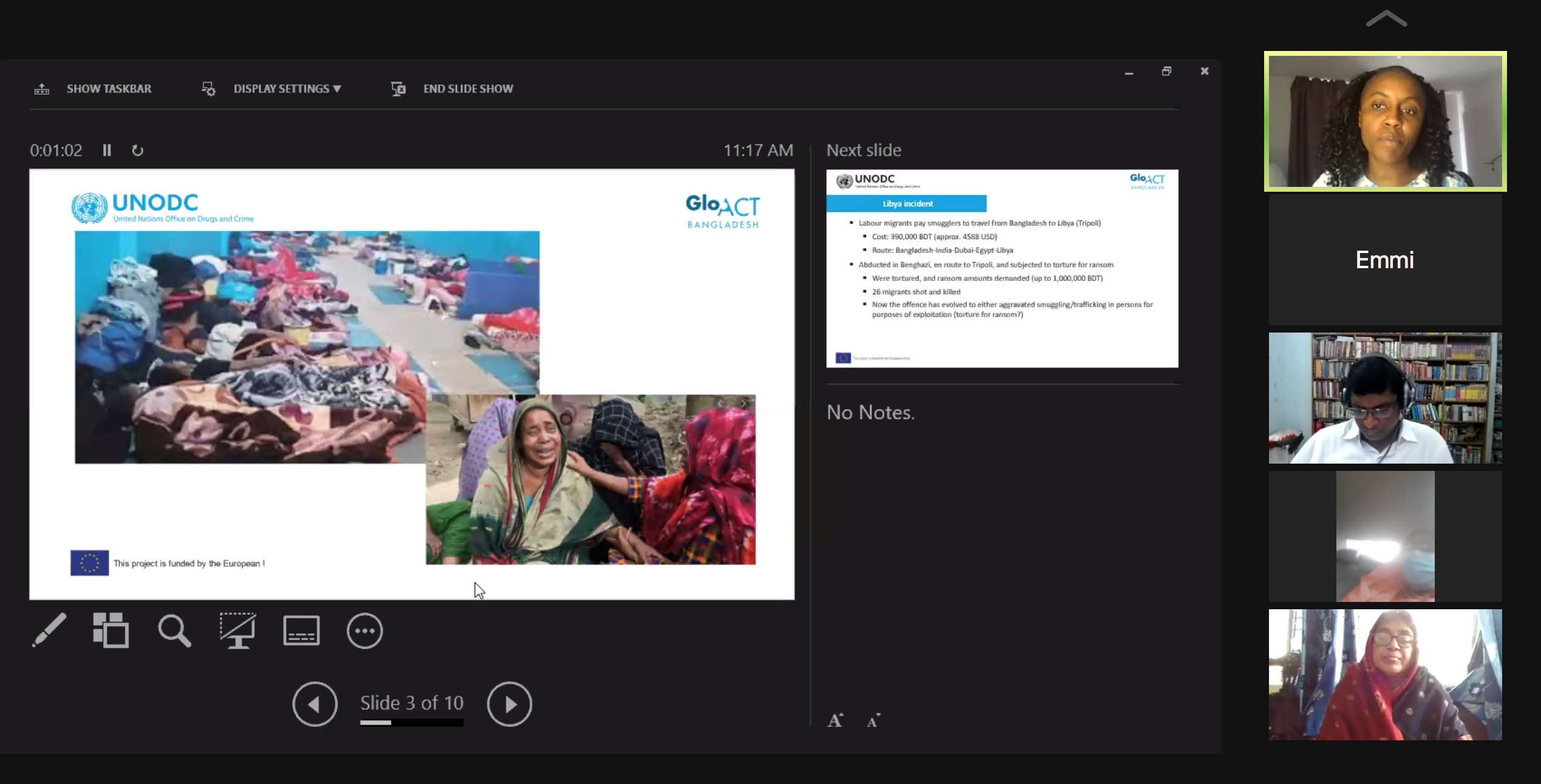 Dhaka, Bangladesh 8 June 2021 – The Global Action against Trafficking in Persons and the Smuggling of Migrants (GLO.ACT-Bangladesh) organized a virtual meeting on 20 May 2021 with the Parliamentarians Caucus on Development and Migration Bangladesh to exchange on Trafficking in Persons (TIP) and the Smuggling of Migrants (SOM) and identify potential areas of collaboration.

The Parliamentarians Caucus on Development and Migration is an inclusive platform consisting of all Bangladeshi parties and involving, among others, ex-parliamentarians for creating an enabling and legal environment for a fair and ethical migration process.

Providing some background on the formation of the Caucus was Mahjabeen Khaled, Secretary-General, Parliamentarians Caucus on Migration and Development, Bangladesh National Parliament, highlighting that in 2014 Bangladesh started to look for ways to involve parliamentarians. She explained that the Caucus is a group of very active, progressive and vocal parliamentarians that raises voices for migrant workers’ rights. Meanwhile, Syed Saiful Haque, Chairman, WARBE Foundation, reminded participants that Bangladesh is a champion country of the Global Compact for Safe, Orderly and Regular Migration and reiterated the need to find ways to partner with UNODC on SOM and TIP.

Addressing the participants, Aimée Comrie, GLO.ACT Project Coordinator stated that “Parliamentarians are vanguards and lead the way in our response to human trafficking and migrant smuggling”. Explaining how she thought parliamentarians do so, she said, “They have the power to raise awareness, curb exploitative practices, and advocate for and adopt laws needed to investigate and prosecute these crimes”. She thanked the Government of Bangladesh, including Parliament, for its continued interest and support on the issue, acknowledging that this led to the establishment of this critical Caucus. She concluded by saying, "This first exchange is an excellent opportunity to explore avenues for future collaboration."

Following the opening remarks, Mahdy Hassan, GLO.ACT-Bangladesh National Project Coordinator presented on UNODC overall mandate area and concluded by introducing GLO.ACT-Bangladesh to the participants, focusing mainly on capacity building work that engaged a broad range of stakeholders implemented in the framework of the project. While Samantha Munadowafa, GLO.ACT Policy Lead spoke to the Caucus about the nexus between SOM and TIP, adding, “These crimes should be distinct and addressed differently under the national law.”

In particular, sharing insights and knowledge on the importance of cooperation between the government, parliament and civil society was Ambassador Nahida Sobhan, Bangladesh’s Ambassador to Jordan and the first female Ambassador posted to the Middle East region. She also spoke about the impact of COVID-19 and the difficulties migrants have faced trying to return home.

The exchange meeting concluded with suggestions for future collaboration, including awareness-raising about human trafficking and migrant smuggling at the grassroots level; organizing substantive workshops on the issue of migrant smuggling and holding joint policy advocacy workshops on the implementation of TIP Protocol, the ratification of SOM protocol, and enactment of national legislation addressing the smuggling of migrants.