UNODC has developed both Video and Audio guides to raise awareness of human trafficking and Smuggling of Migrants among those who are vulnerable to trafficking, and those who are empowered to act against these crimes.

Affected for life is a training and awareness raising tool.

Shaun Driscoll discusses the involvement of Transnational Organized Crime in the Fishing Industry. A study on this issue has been published by UNODC's Anti-Human Trafficking and Migrant Smuggling Unit.

In the margins of the Working Group on Trafficking in Persons, UNODC hosted a side event to brief delegates on the technical assistance UNODC offers to States parties in combating human trafficking and migrant smuggling. Presentations of UNODC expert panelists can be viewed below:

Mr. Felipe De La Torre, Crime Prevention Expert on Trafficking in Persons in the UNODC Mexico and Central America Regional Office, on the practical preventative power of awareness raising, in the context of the Blue Heart campaign in Mexico. 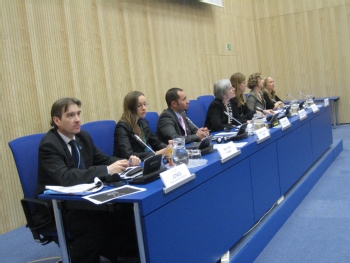 Read more about the context here.

Open Your Eyes to Human Trafficking (2008)

To coincide with the Vienna Forum to Fight Human Trafficking, UN.GIFT produced a Public Service Announcement video spot. The theme - a man walks through a market without realising the human trafficking crimes happening around him - calls for people to open their eyes to human trafficking.

The spot calls on the general public to take action against human trafficking by showing a woman helping a victim escape her forced labour situation. UNODC worked closely with local partners in the distribution of the spot to add a telephone hotline number at the end for help or more information.

This spot seeks to empower victims of human trafficking by showing that it may be possible to escape forced labour situations. UNODC worked closely with local partners in the distribution of the spot to add a telephone number where victims are able to receive assistance and support.

The focus of this award-winning spot is the trafficking in men, women and children for forced labour, such as in factories, fields or as domestic servants. The spot aims to warn potential victims about the dangers of trafficking, and to raise awareness among the general public of this growing problem.

Young women who are at risk of becoming victims of human trafficking networks are the focus of this Public Service Announcement. The spot uses powerful images to reveal the harsh realities behind attractive job offers abroad, and seeks to educate potential victims of the dangers involved in human trafficking.

AHTMSU Crime Prevention Expert Mr. Usman Haruna discusses human trafficking in Africa on the occassion of the launch of AU.COMMIT - an intitiative of the African Union to fight human trafficking.

Through her work with victims of human trafficking, Emma Thompson felt inspired to take action. She said that Elena's story, 'somehow contained the seeds of a rebirth and also of a creative act that could be taken'. So, she joined forces with fellow artists to create "Journey".

Afghanistan is a place of origin, transit and destination for victims of human trafficking. The country currently has no specific law to deal with this crime, but legal drafters are working on Afghanistan's first Anti-Trafficking Law. Riikka Puttonen, a legal expert with the Anti-Human Trafficking Unit, discusses the trafficking situation in Afghanistan with Louise Potterton.

Children from Vietnam are being trafficked to the UK, where they're forced to work in cannabis factories. UNODC is working on projects in Vietnam to prevent human trafficking and is assisting the UK and Vietnamese police authorities in tackling this crime. Troels Vester, Crime Prevention Expert, discusses the issue with Louise Potterton.

Support the Fight against Human Trafficking

A series of audio public service announcements has been produced within the framework of UN.GIFT. Using real-life examples from around the globe, these radio spots show that by joining forces actino can be taken against this crime. UNODC encourages broadcasters around the world to support UN.GIFT by airing these PSAs. For information on UN.GIFT visit www.ungift.org