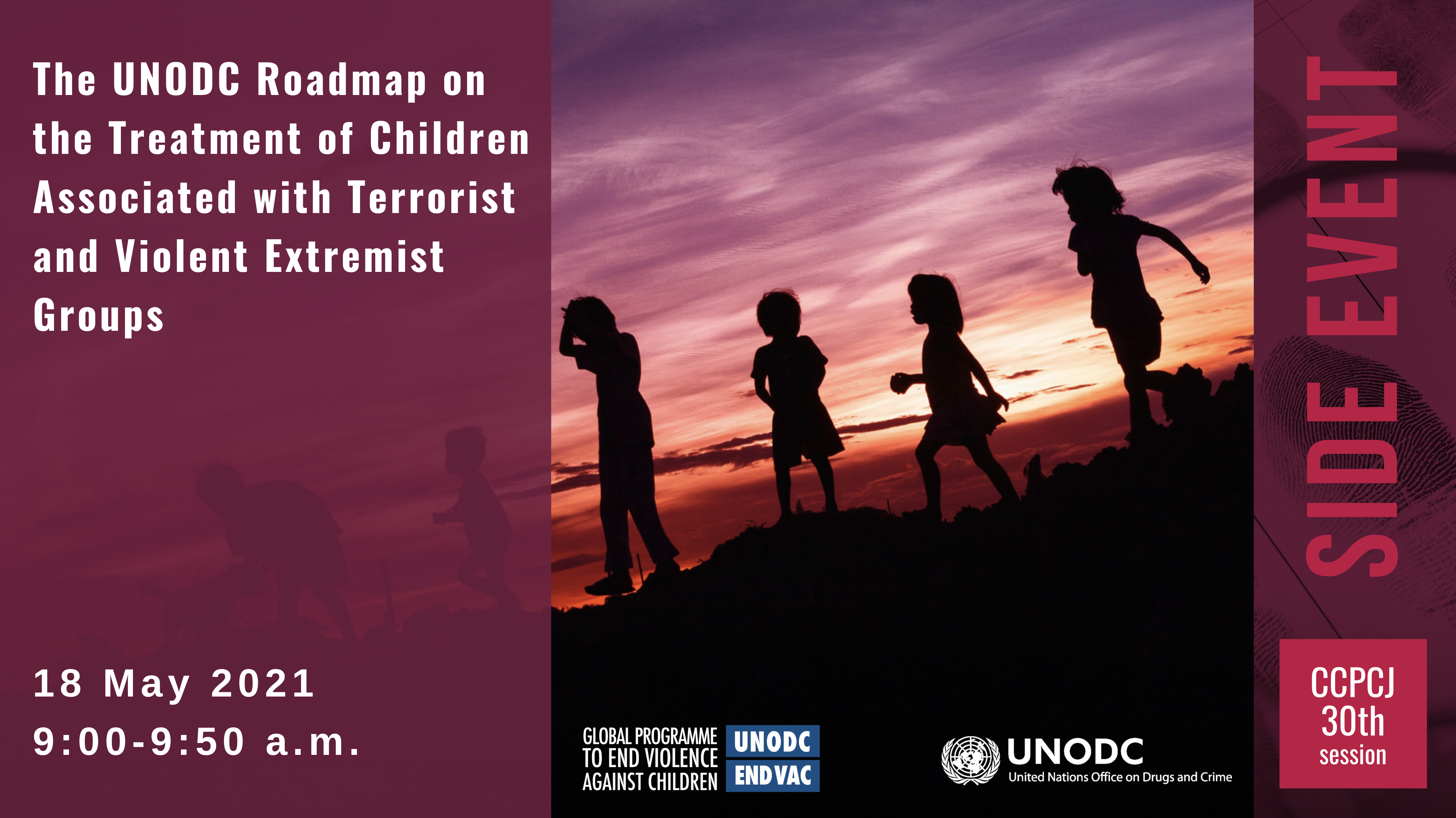 18 May 2021 - On the occasion of the 30th Session of the Commission on Crime Prevention and Criminal Justice, the UNODC Global Programme to End Violence Against Children co-organized with the European Union, and the Governments of Indonesia and Japan, the Special Event on ‘The UNODC Roadmap on the Treatment of Children Associated with Terrorist and Violent Extremist Groups’.

Child recruitment and exploitation by terrorist and violent extremist groups is a global threat, which has been steadily increasing in recent years, as these groups’ capacities to target children have reached far beyond the countries affected by armed conflict. The UNODC Roadmap summarizes relevant guidance for action in the areas of prevention; rehabilitation and reintegration; and, justice responses on the treatment of these children. Opening the event, Ms. Ghada Fathi Waly, Executive Director of the United Nations Office on Drugs and Crime, stated “UNODC has supported over 35 countries in developing rights-based integrated responses to prevent and counter the association of children with terrorist and violent extremist groups. In 2019, with support from Japan, we launched the UNODC Roadmap on the treatment of these children, to guide justice responses, better protect the children and enable their reintegration into society. Today, we are proud to announce the launch of STRIVE Juvenile, a project that turns this goal into reality. I take this opportunity to thank not only the European Union, who has proved to be a crucial ally and supporter of this endeavour, but also the representatives of Indonesia, Iraq, and Nigeria, the three countries that have decided to partner with UNODC to turn the Roadmap into action.”

As part of its general mission to contribute to the achievement of security and justice for all, UNODC has the specific mandate to support Member States in ensuring that children are better served and protected by justice systems and has also been addressing specific efforts to increase the protection of children from terrorism and violent extremism, such as through the UNODC Roadmap, with the support of one of UNODC’s most exemplary partners, the Government of Japan. During his remarks, H.E. Mr. Mitsuji Suzuka, Representative of the Government of Japan, Ambassador in Charge of International Cooperation for Countering Terrorism and International Organized Crime, stressed the fact that “recruitment and exploitation of children by terrorist and violent extremist groups is the most serious issue to be tackled. This is a heinous act that deprives children of their future, takes advantage of their vulnerabilities and has control over their life for a long time”. Ambassador Suzuka also pointed that “due to COVID-19 circumstances, it is essential that policy makers and Governments collaborate with international organisations, including UNODC, academic institutions, and civil society organisations, focusing on children who are vulnerable to threats.”

The Special Event was also the opportunity to present ‘STRIVE Juvenile: Preventing and Responding to Violence against Children by Terrorist and Violent Extremist Groups’ a new three-year initiative, funded by the European Union, that partners with UNODC in Indonesia, Iraq and Nigeria for the implementation of the project. Ms. Hilde Hardeman, Head of the European Commission’s Service for Foreign Policy Instruments, confirmed the urgency of the situation and the need to respond to the phenomenon of child association with terrorist and violent extremist groups. “The scale and the nature of the phenomenon call for urgent action (…). We need a strategy that extends well beyond the rule of law, beyond security and law enforcement measures. A strategy that draws upon a system-wide capacity to respond to violent extremism and that promotes regional and cross-regional exchange of practices. The European Union is supporting such a programme called STRIVE. It empowers women and youth, promotes community dialogue, and improves capacities of media and education sectors to fight against radicalised ideologies. Children have a special place in this programme through a specific action called STRIVE Juvenile.”

Demonstrating strong political will in dealing with the phenomenon of child recruitment and exploitation by terrorist and violent extremist groups, the Government of Indonesia has played a leading role in the ASEAN region and globally by advocating for supporting the rehabilitation and reintegration of children associated with these groups. Indonesia’s longstanding partnership with UNODC was further enhanced by announcing its renewed cooperation through STRIVE Juvenile. Mr. Andhika Chrisnayudhanto, Deputy Head for International Cooperation of the National Counterterrorism Agency of Indonesia (BNPT), highlighted “for Indonesia, the issues of the prevention, the treatment and the protection of children associated with terrorist and violent extremist groups is to be addressed as a matter of emergency (…) and a national priority,” adding that “the Government of Indonesia perceives the treatment of these children as an integral part of the comprehensive Counter-Terrorism and Preventing and Countering Violent Extremism strategy. It is essential for these children to be recognized and treated primarily as a victim.”

During his statement, Mr. Faiq Zidan, President of the Supreme Judicial Council and Chief of the Federal Court of Cassation of Iraq, expressed the Supreme Judicial Council’s support regarding all efforts that are being made within the framework of addressing violence against children by extremist groups and confirmed the willingness of his county to contribute to the implementation of any training programmes or policies that the United Nations Office on Drugs and Crime will implement within the coming years. Mr. Faiq Zidan underlined how “Iraq had witnessed hardships after the terrorist group ISIL took control of some of its territory. These hardships are embodied in all sorts of criminal manifestations and terrorist behaviour through the recruitment and exploitation of children by this terrorist organization. The aforementioned organization worked to attract children and adolescents to join their forces and to get them to carry out terrorist activities”.

Within the new STRIVE action, the Government of Nigeria will partner with the EU and UNODC to develop coherent strategies that better serve and protect children by enhancing safe and resilient communities, in which human rights and the rule of law guide the approach to combating violent extremism. Rear Admiral YEM Musa, Coordinator of the Counter Terrorism Centre, Office of the National Security Adviser (ONSA) in Nigeria, stated “Nigeria welcomes the opportunity to strengthen its cooperation with UNODC under the New STRIVE Juvenile Project, which focuses on fundamental values at the base of our approach. We believe this project will help us in strengthening the implementation of our policy document on preventing and countering violent extremism.” Rear Admiral YEM Musa also underlined that “without investment in rehabilitation and reintegration as well as in prevention of child recruitment by strengthening our communities to prevent and respond to this phenomenon, there will be no end to the cycle of violence.”

UNODC expressed its sincere gratitude to these partner Governments and co-sponsors for their valuable partnership with UNODC in recent years. Under the flag of the UNODC Roadmap, the Office renewed its commitment to the protection of children from terrorism throughout the world and pledged to continue working so that children can become agents for their own future and actors of their own protection. 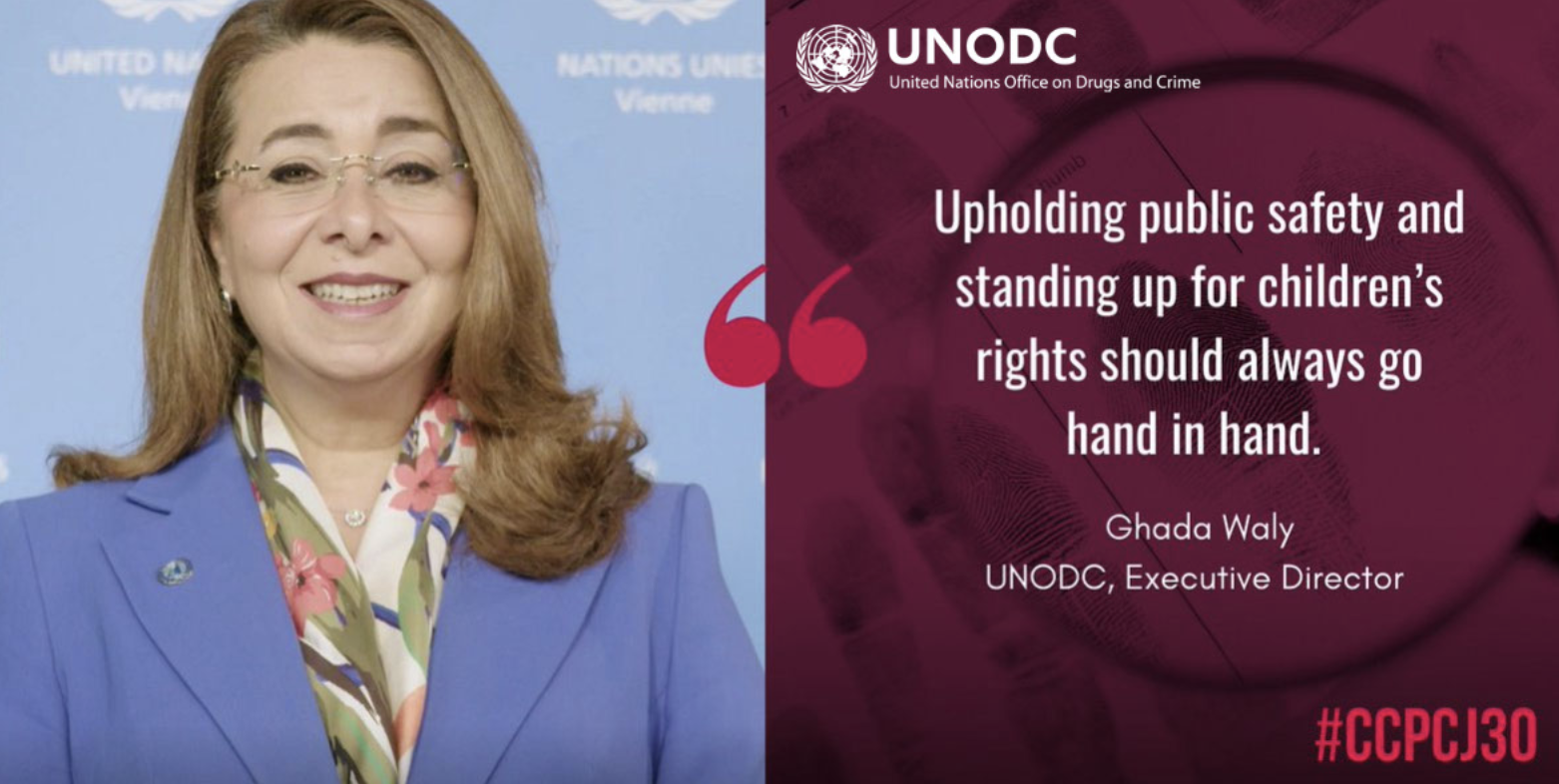 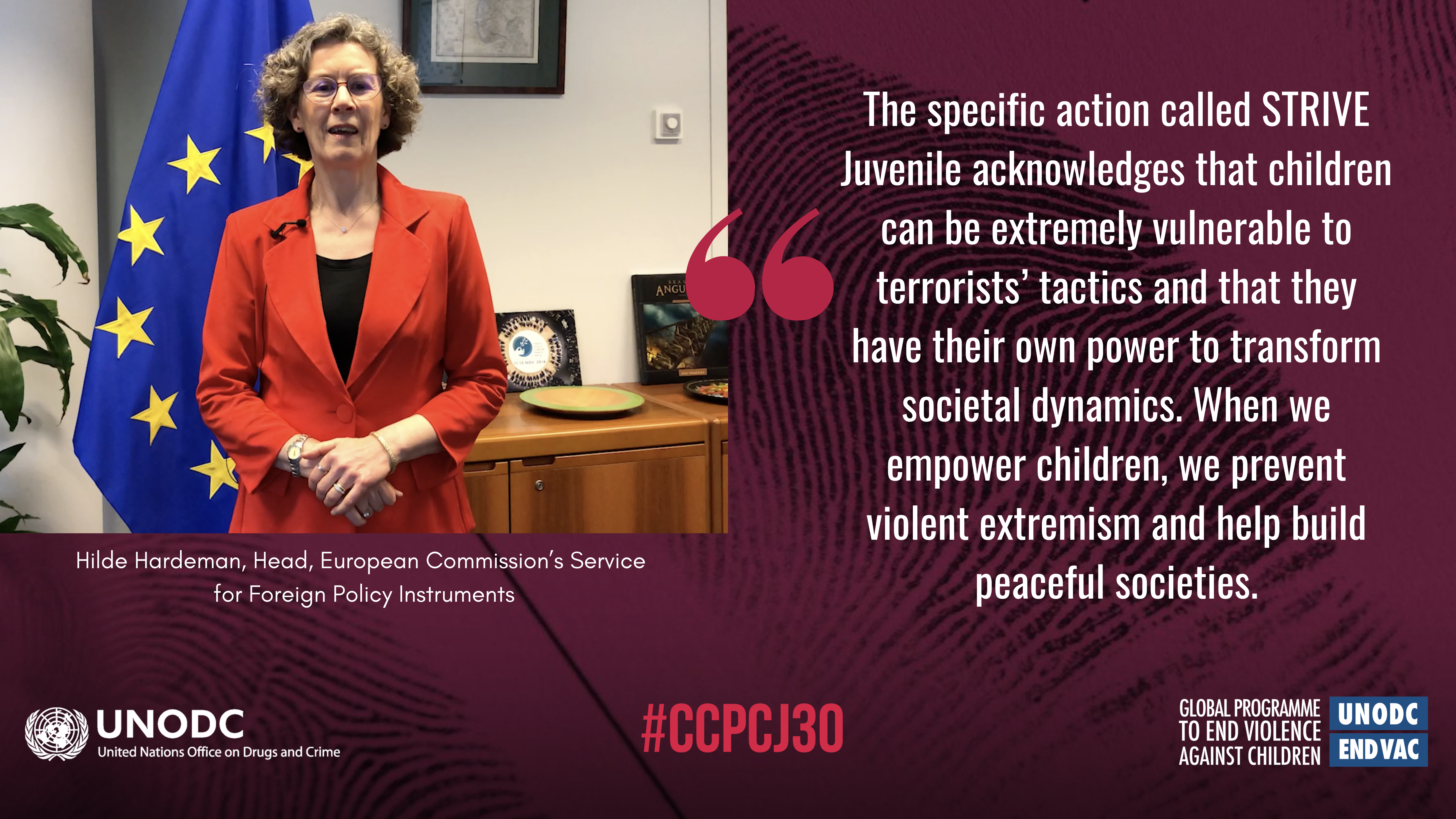 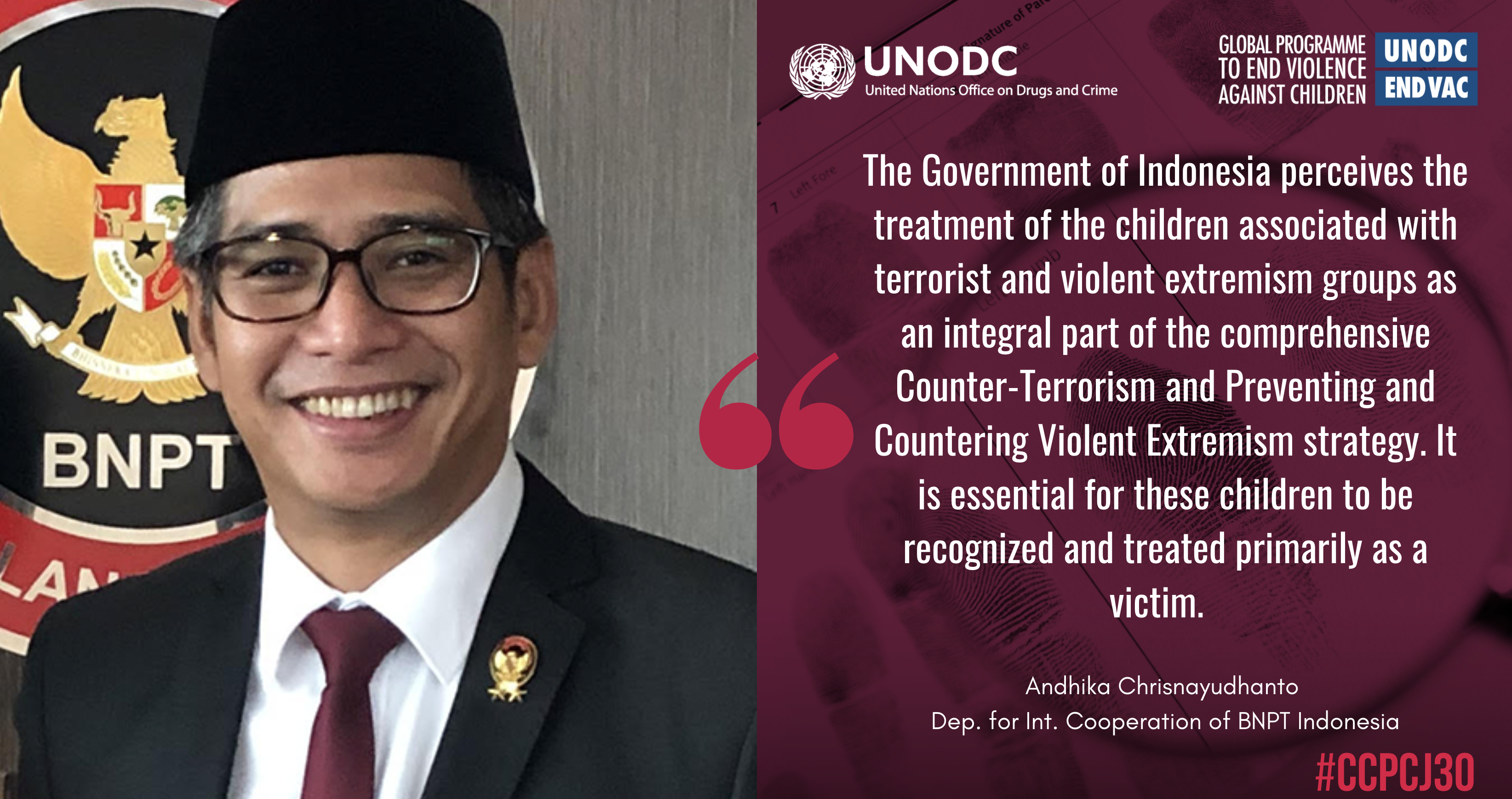 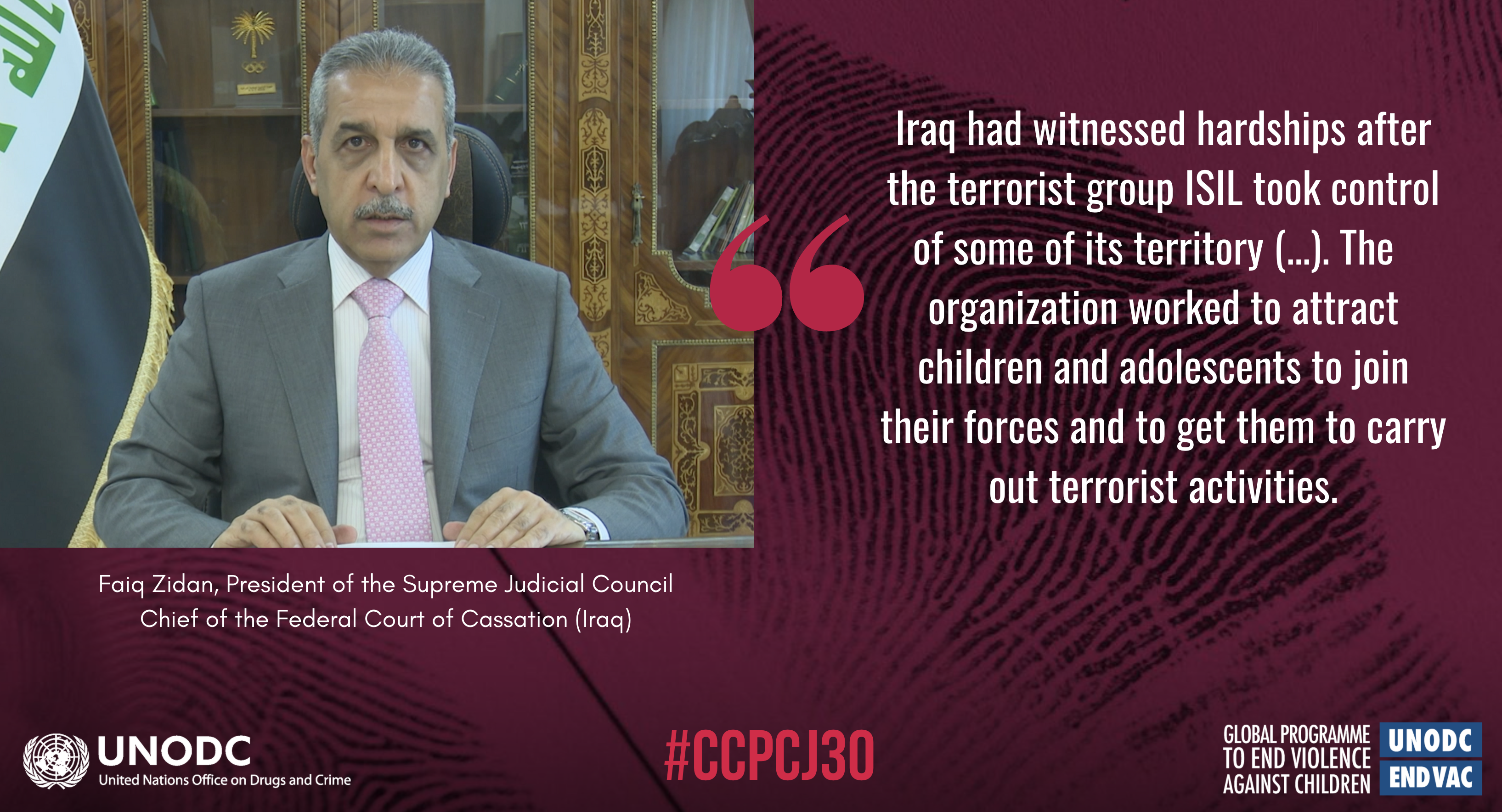 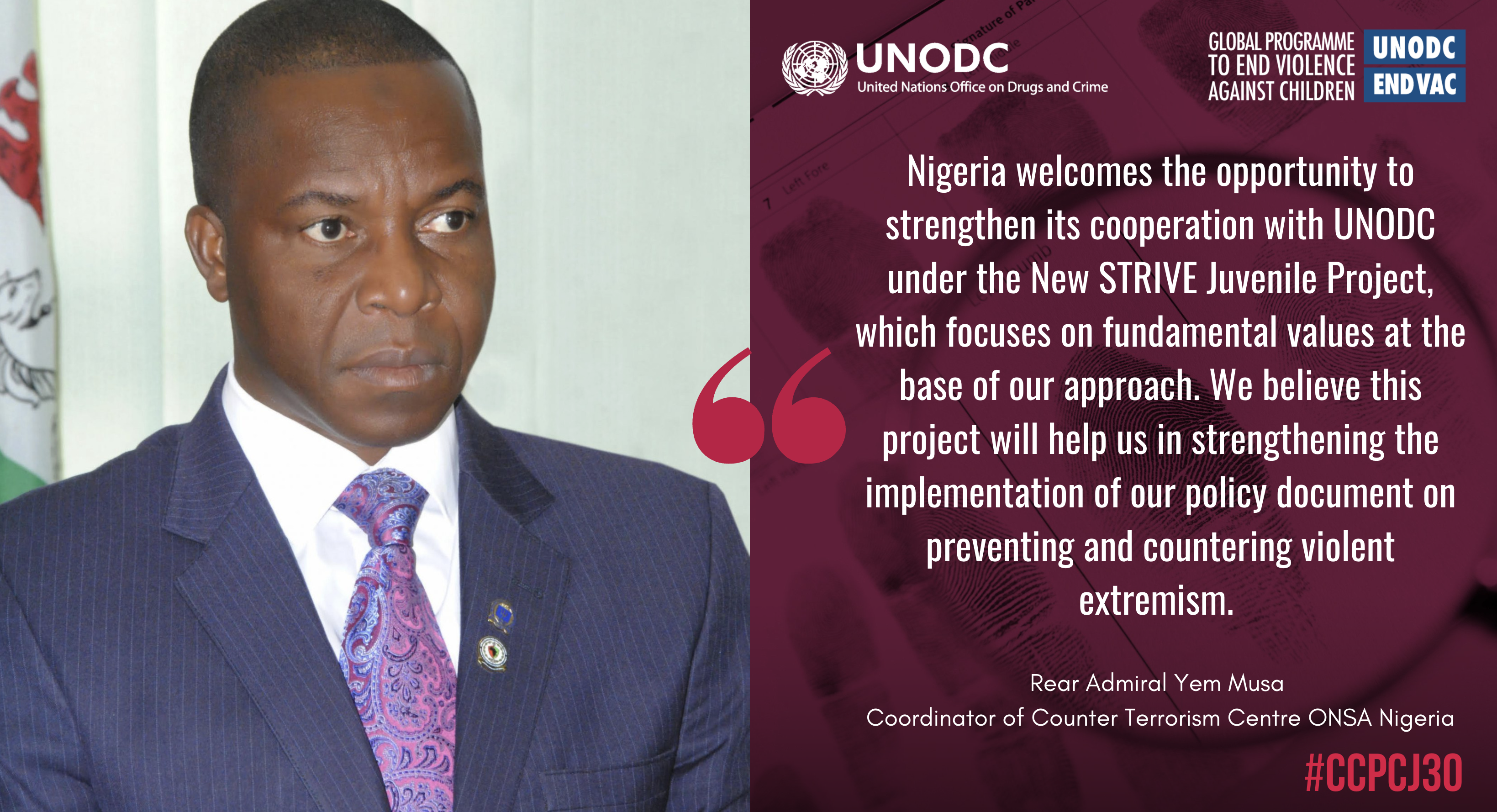 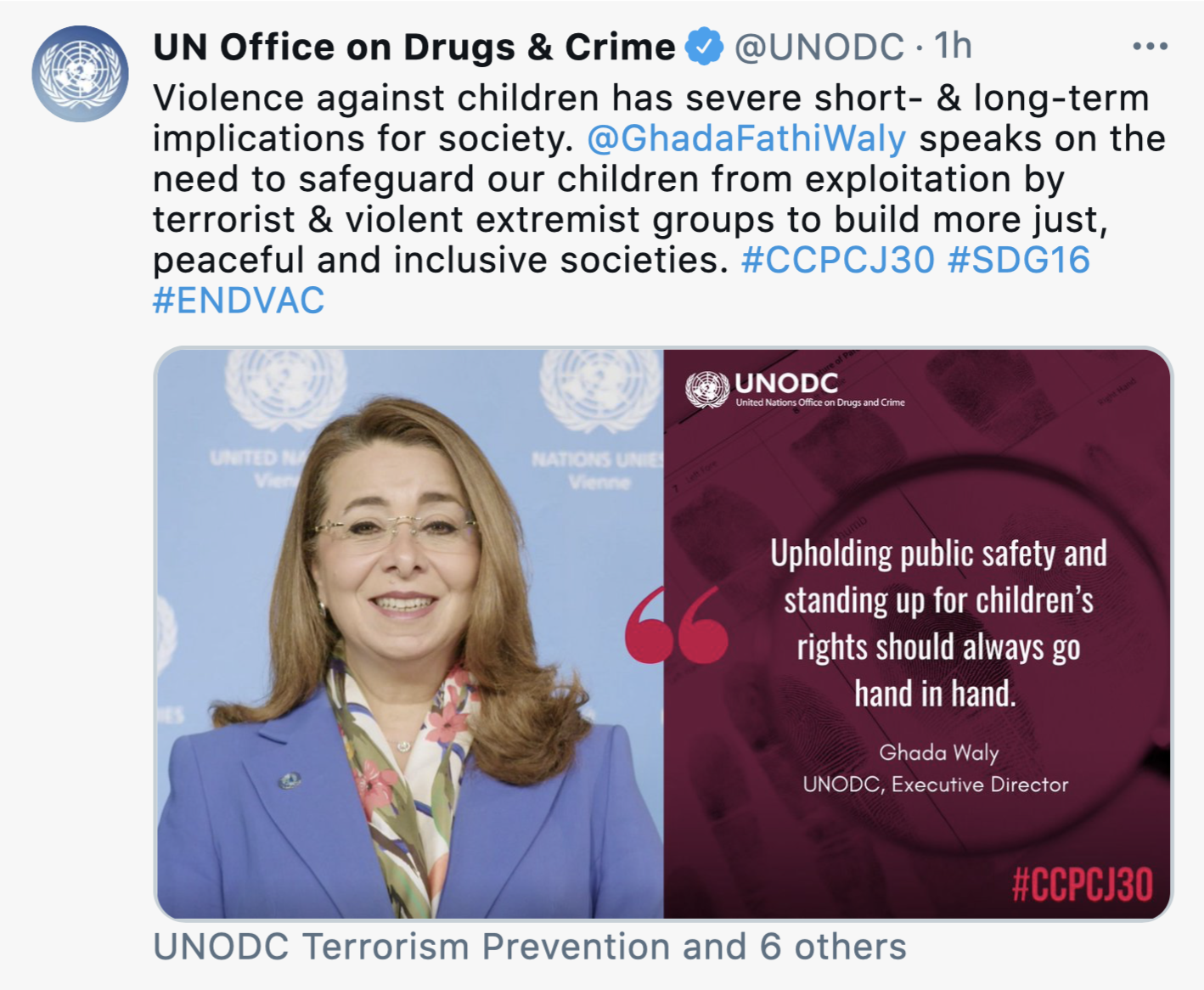 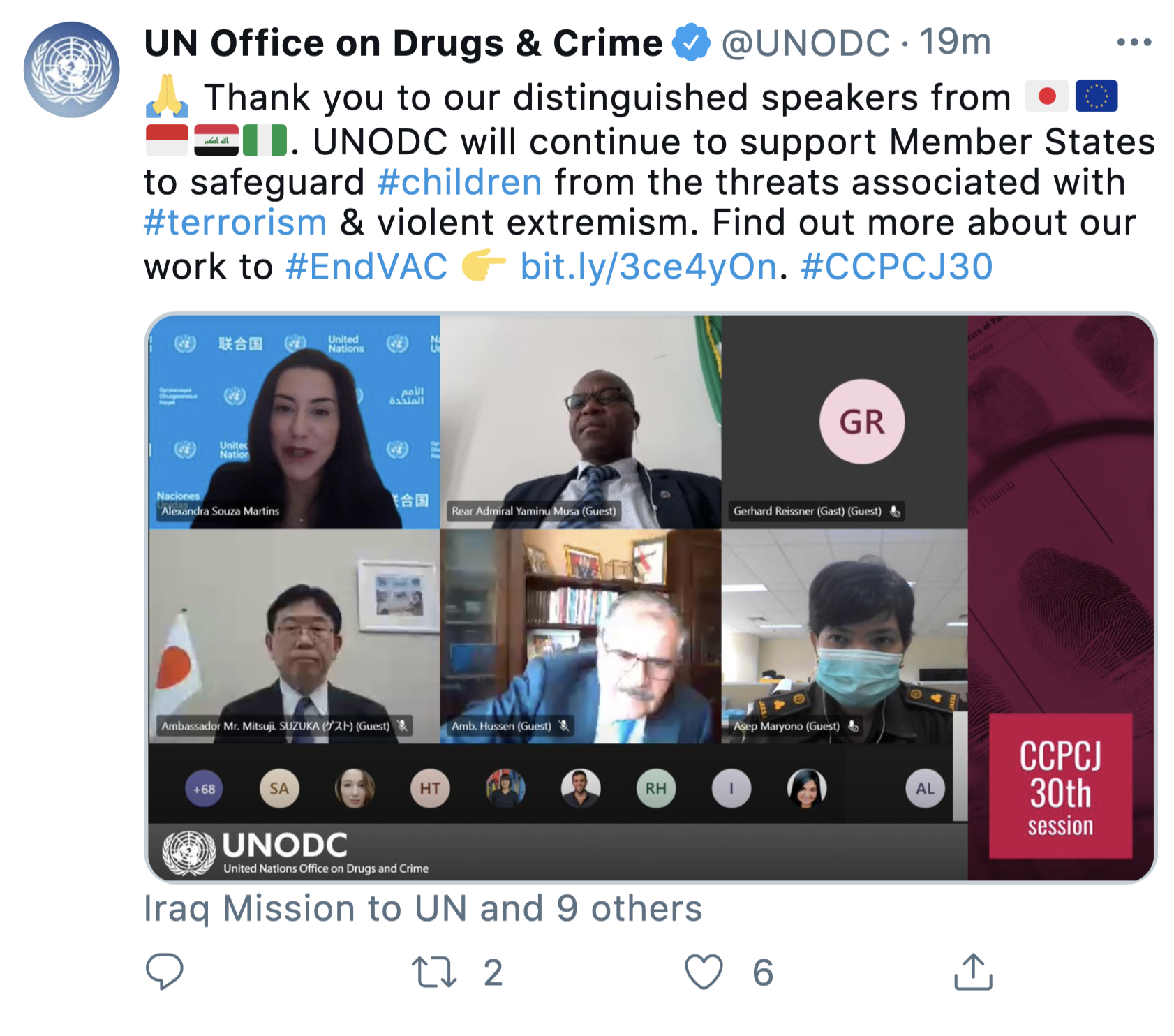 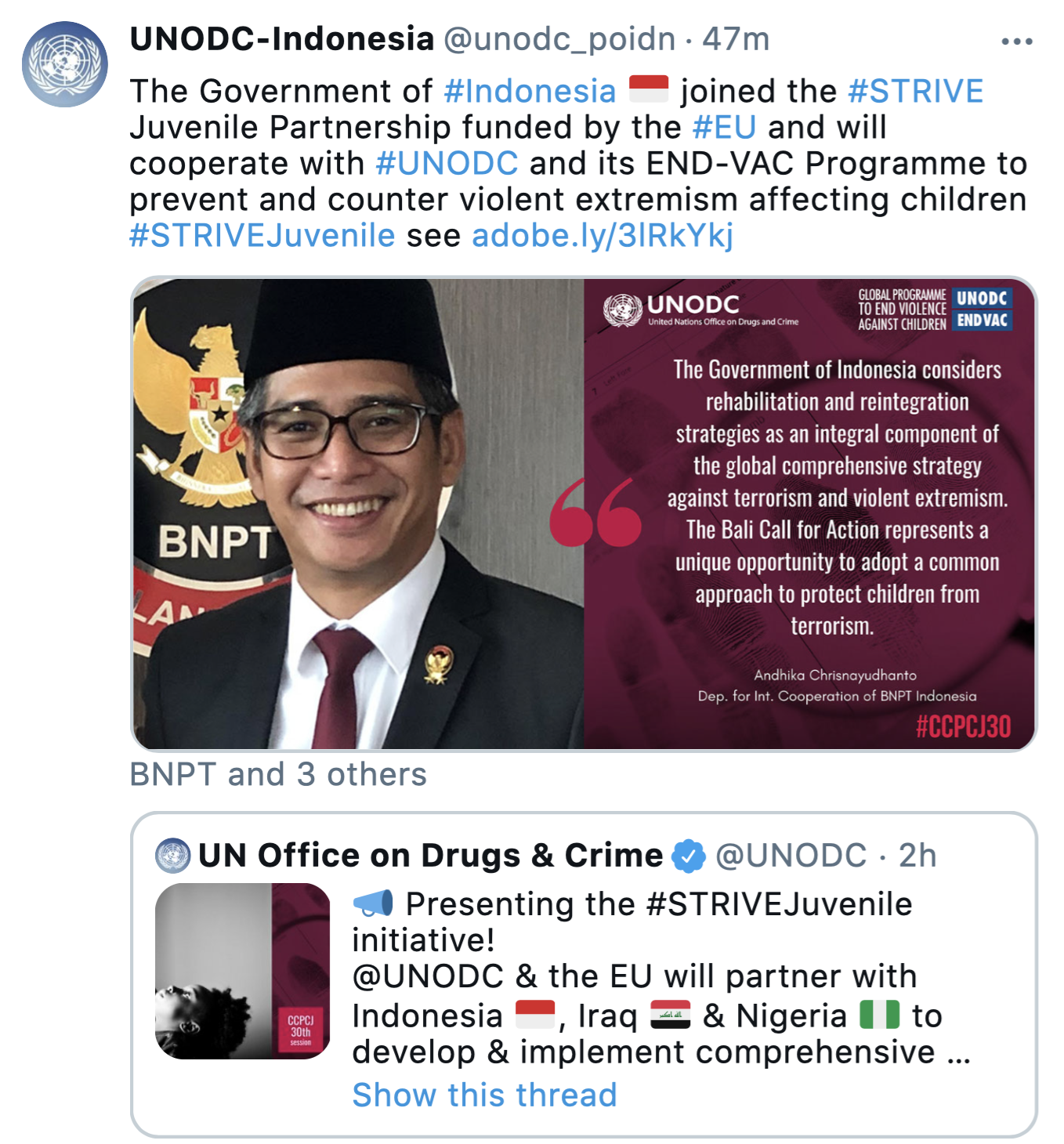 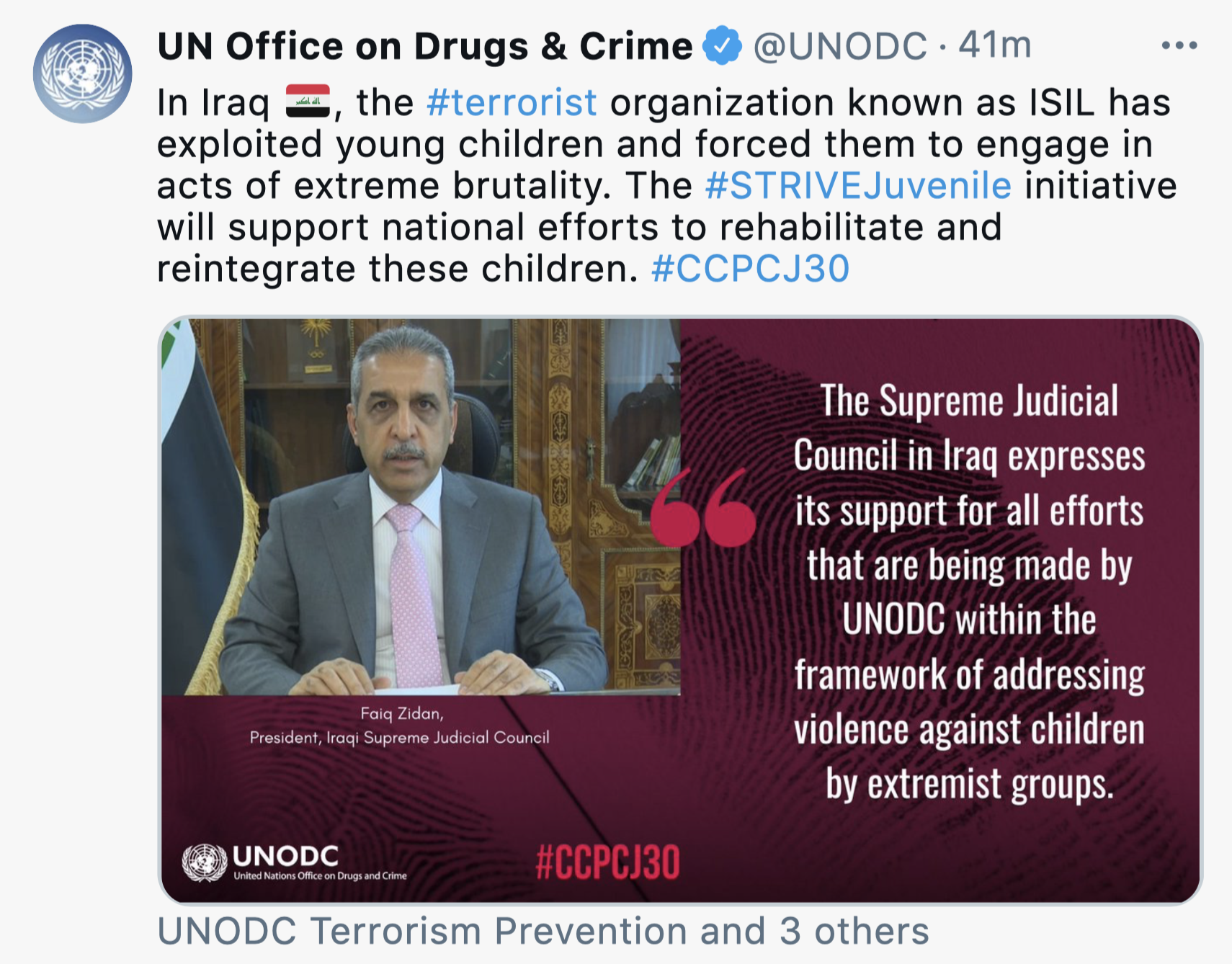 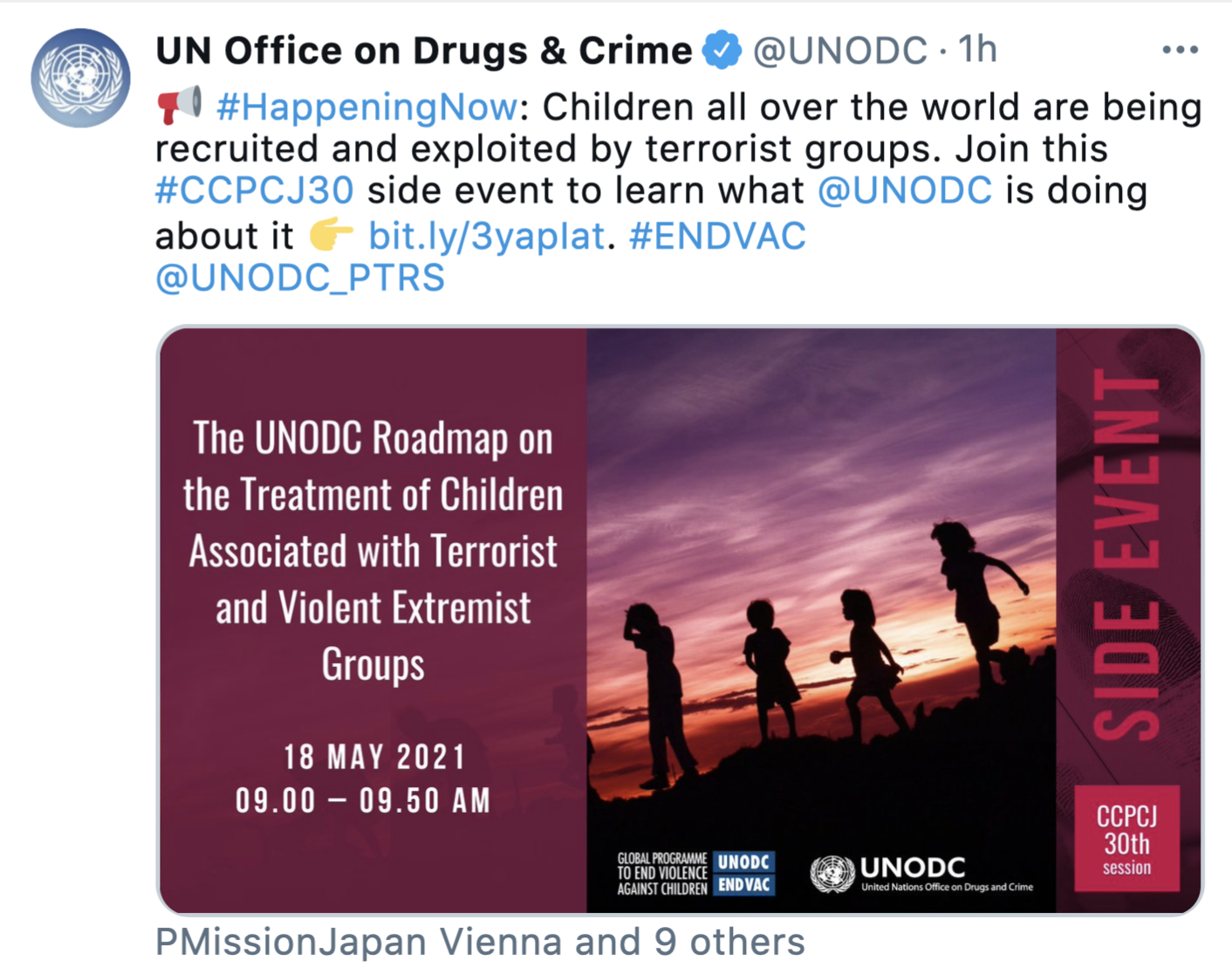 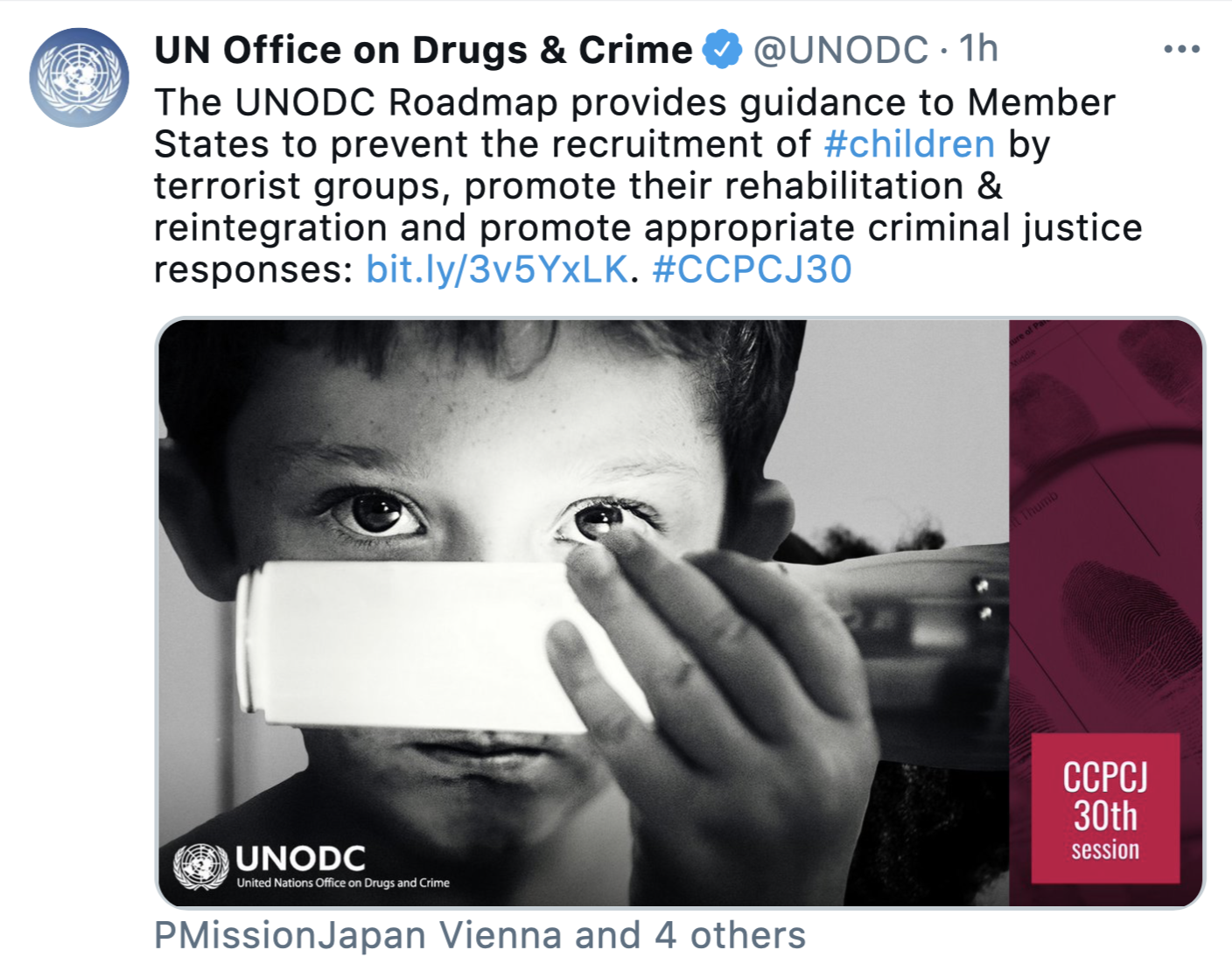 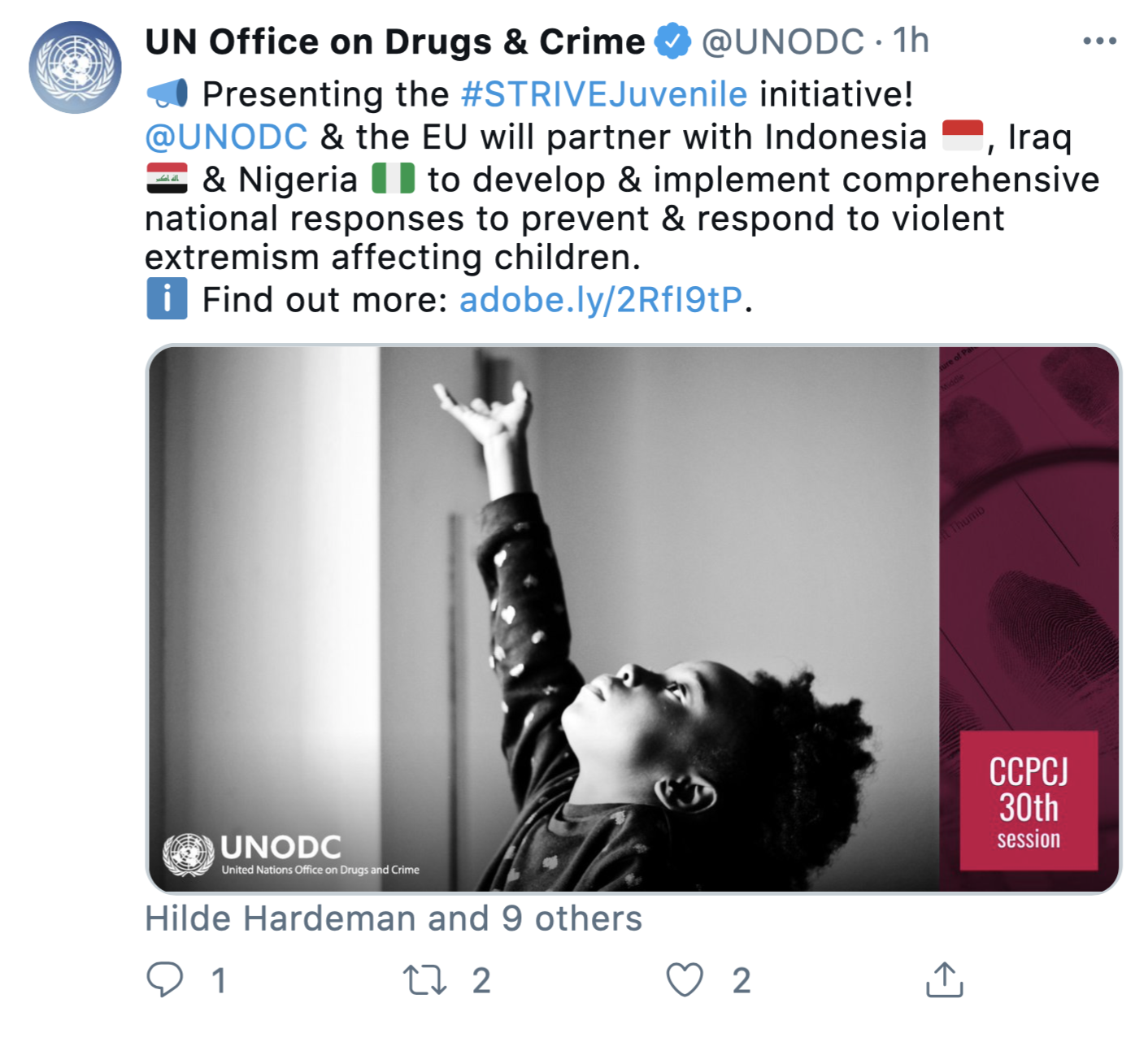 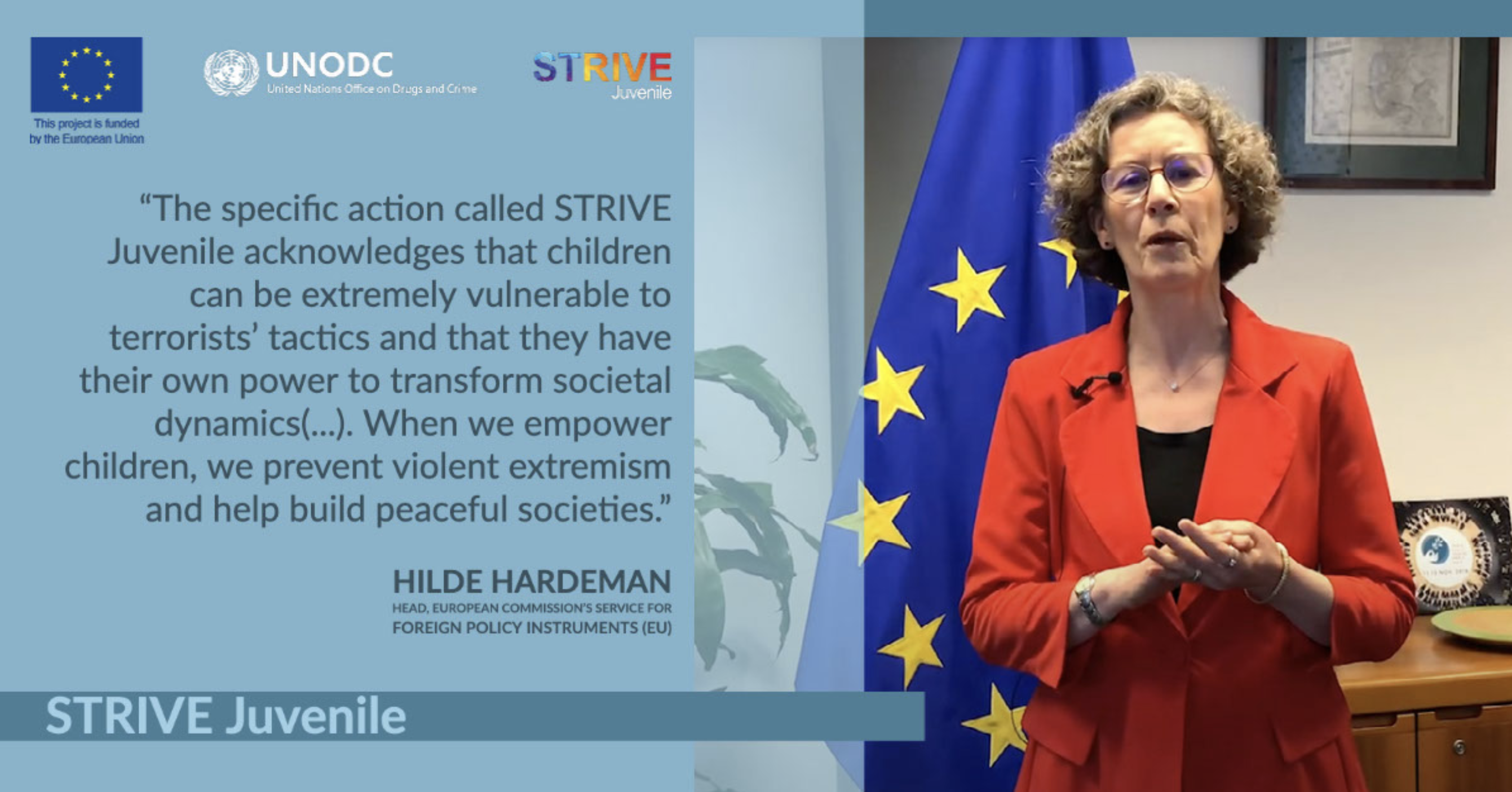 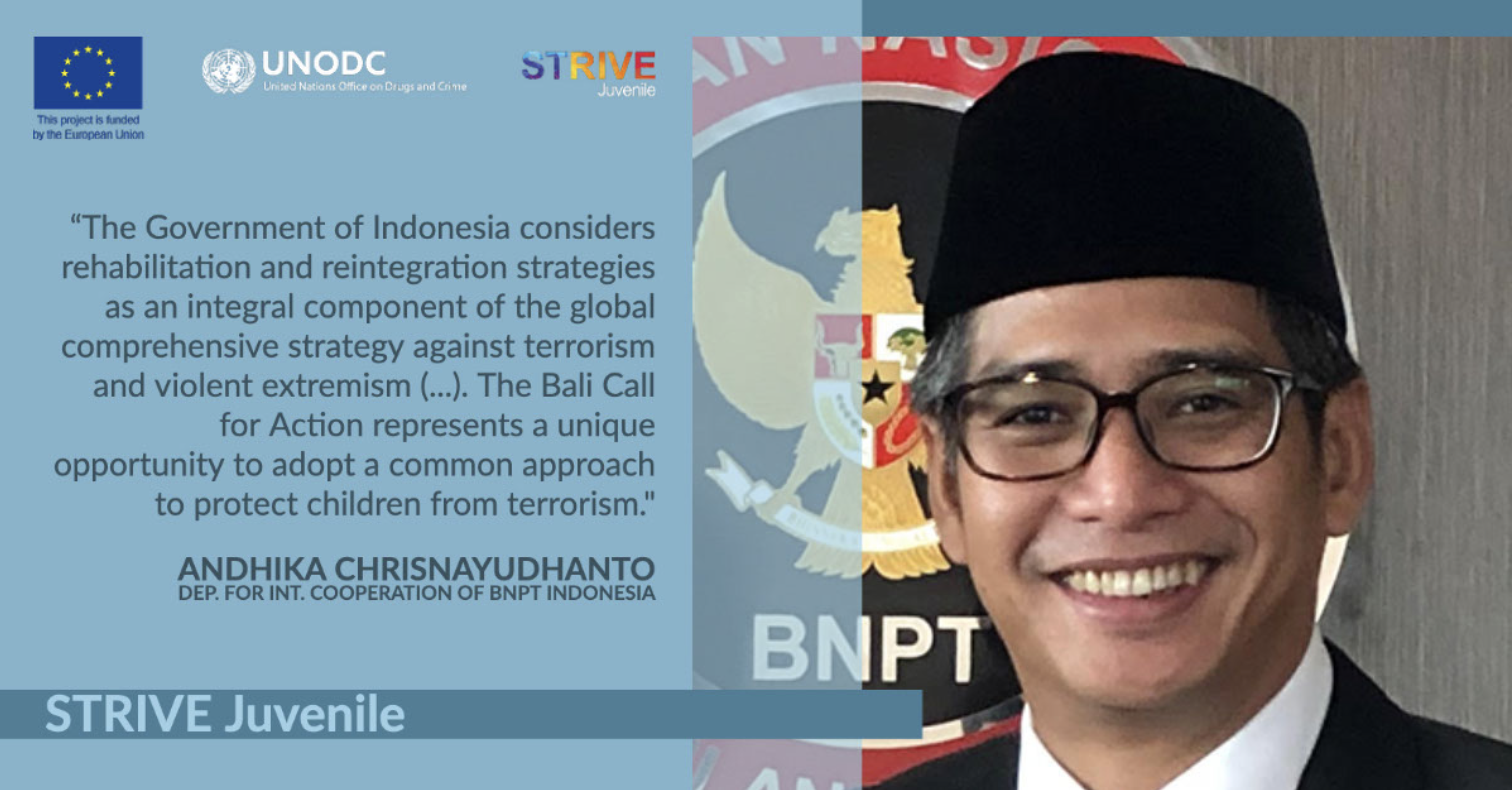 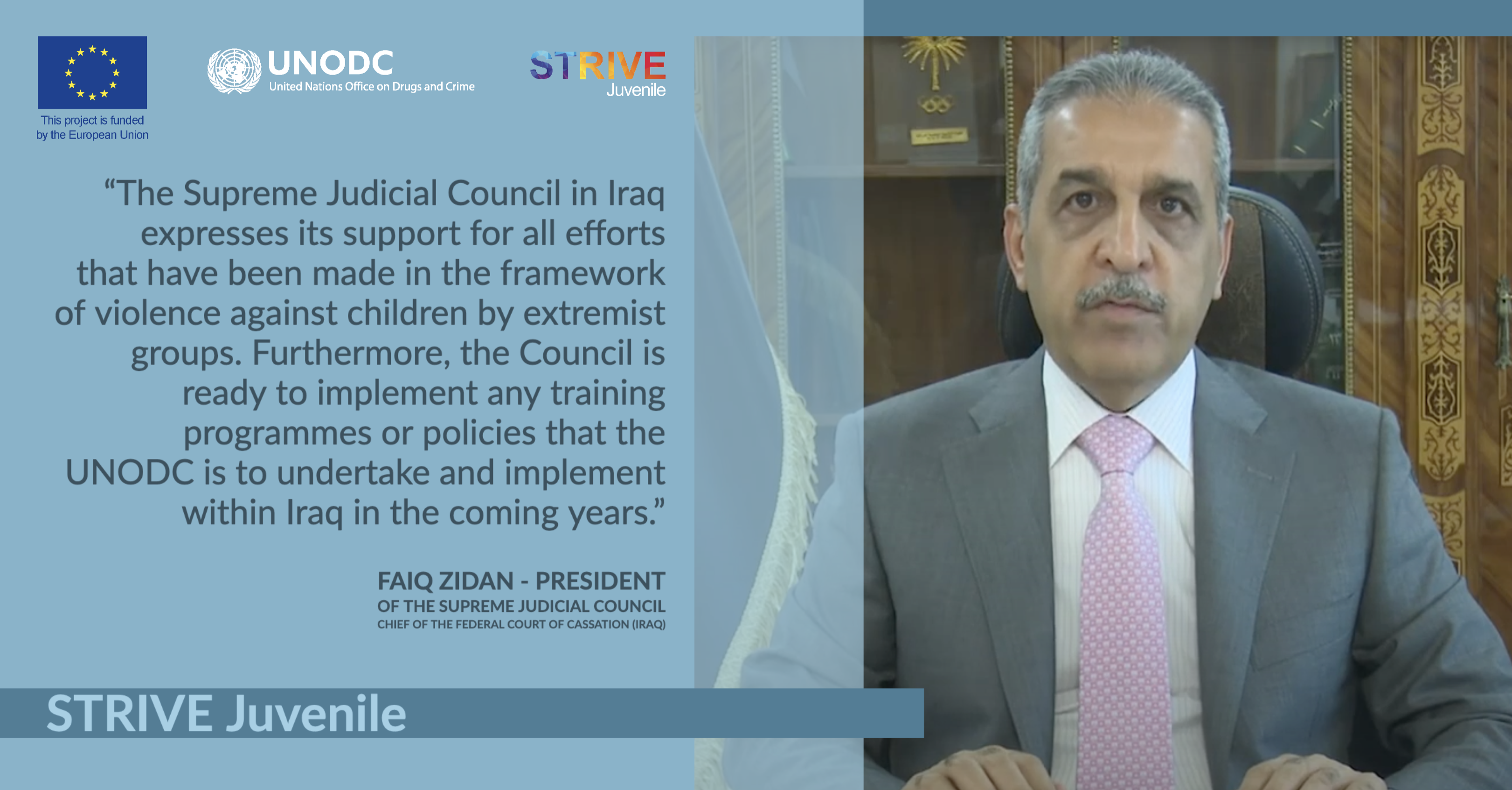 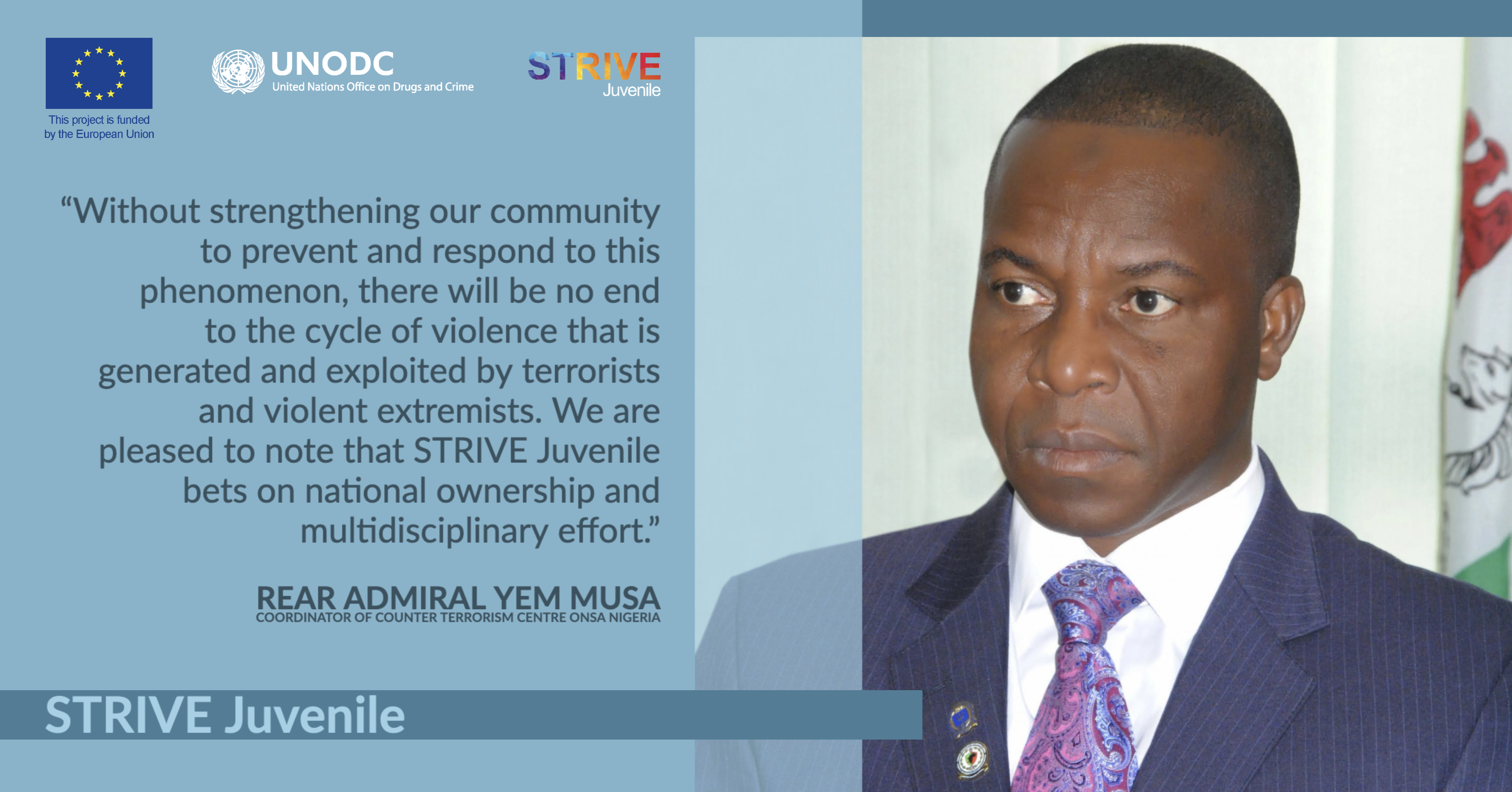