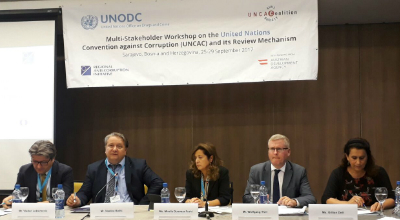 25 September 2017 - The first Multi-stakeholder Workshop on the United Nations Convention against Corruption (UNCAC) and its Review Mechanism took place from 25 to 29 September in Sarajevo, Bosnia and Herzegovina. It was the first of such workshop to be held in Southeast Europe (SEE). The workshop, which was supported by the Austrian Development Agency through the Regional Anti-Corruption Initiative, and by the European Bank for Reconstruction and Development, aimed to develop capacities of around 60 participants from across the SEE region to contribute to the implementation of the UNCAC and its Review Mechanism.

The workshop promoted collaboration between civil society organizations (CSOs), governments and the private sector during the second cycle review, which is necessary for successful anti-corruption efforts in the future. The workshop also informed participants about the methodology and tools for country reviews and built their capacity to reproduce workshop sessions at the national/regional level. Participants engaged in a constructive exchange of dialogue by sharing their experiences, lessons learned and good practices, as well as undertaking practical exercises.

Speaking at the event, Vladica Babic, Assistant Director of Bosnia and Herzegovina's Agency for the Prevention of Corruption and the Coordination of the Fight Against Corruption, underscored the importance of cooperation to tackle this phenomenon worldwide. He said: "Without the help from international partners and civil society, we are blind and cannot do anything in our efforts to fight corruption."

The UN Convention against Corruption, ratified by 182 States, is the only legally binding, universal, anti-corruption instrument. Its far-reaching approach and the mandatory character of provisions make it a unique tool for developing a comprehensive response to global corruption issues. During the first review cycle, approximately 85% of governments involved CSOs during their country visits, which builds momentum at the international level for States to uphold their treaty obligations in the implementation of UNCAC.

Pointing to the 2030 Agenda, Mirella Dummar Frahi, UNODC's Civil Society Team Leader, said: "All Sustainable Development Goals can be hampered if corruption prevails. The fight against corruption is deeply rooted in Goal 16, which aims to provide access to justice for all and build effective, accountable and inclusive institutions at all levels."Therefore, the workshop attempts to reiterate the importance of this practice during the second review cycle, especially in the SEE region.

Government focal points and CSO representatives committed to working constructively together during the forthcoming review, with the aim to increase transparency and inclusiveness and ultimately combat corruption with concrete actions.

To date, 286 civil society organizations from across the world have been trained under the UNODC Civil Society Programme. It aims to provide them with the necessary tools to work with Governments and the private sector in implementing the Convention.