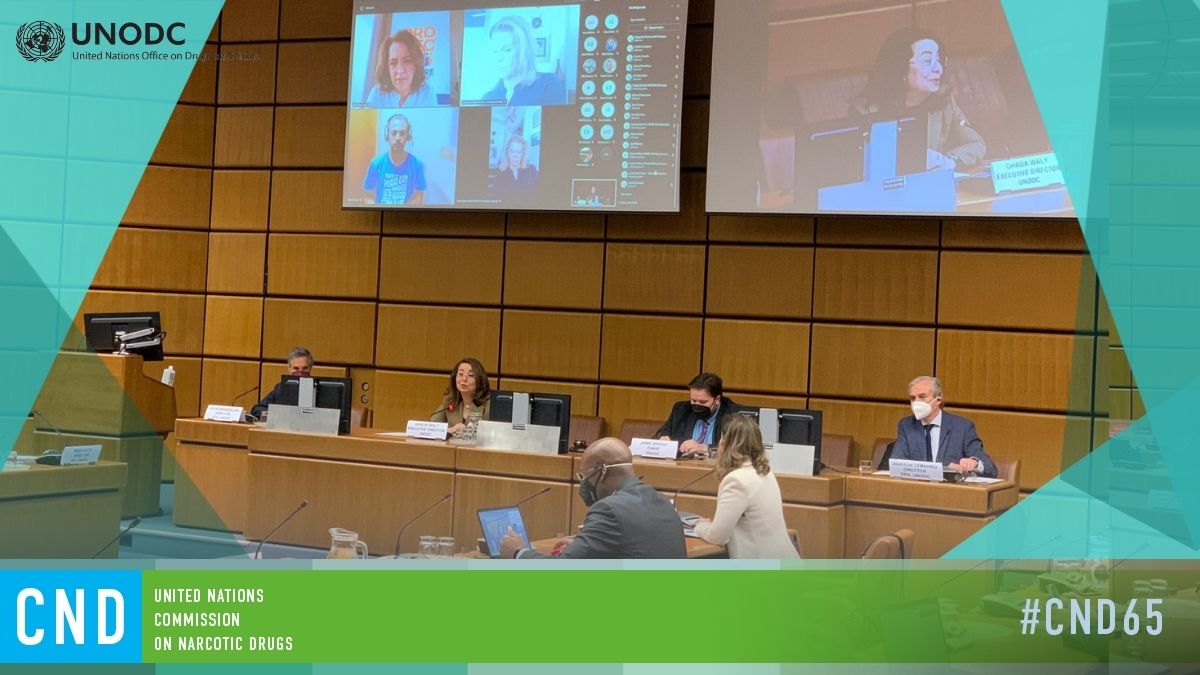 Vienna (Austria), 24 March 2022 – The importance of partnership with civil society was highlighted by the UNODC Executive Director, Ghada Waly during the Informal Dialogue with civil society in the margins of the 65th session of the Commission on Narcotic Drugs (CND). "Civil society is a key partner and their role is at the centre of the UNODC strategy", she said, stressing that close collaboration between various stakeholders, including civil society, is fundamental to guarantee proper implementation of drug policy commitments.

During the session, the UNODC Civil Society Unit (CSU) co-organised three side events together with the Vienna NGO Committee on Drugs (VNGOC) and other stakeholders. Over 100 representatives from 50 CSOs took part in the NGO Briefing ahead of the CND.

The regional perspective from civil society In the first side event organized by the VNGOC with the support of Australia, and the Associacao de Tratamento de Toxicodependentes de Macau (ARTM Macau), the International Movement for Advancement of Education Culture Social & Economic Development, the Pakistan Youth Organization and the UNODC CSU, where the Asia-Pacific common position on drugs was presented. Augusto Nogueira from ARTM Macau, presented a broad set of recommendations from civil society, mentioning “the need for placing human rights, health, and evidence at the centre of all drug policies”. This side event incorporated the perspectives from local and regional CSOs and guided the work of a wide range of NGOs from the Asia-Pacific region, to help shape and guide civil society and government responses on a long-term basis by means of a common position on drugs.

Empowering young people for actions to address organized crime and drugs was emphasized at the side event on 'Cross-cutting Evidenced-based Interventions on Drugs & Crime in Africa for the Implementation of Strategic Vision for Africa', organized by Slum Child Foundation with the support of the UNODC CSU and other co-organizers. During this event, the outcome document of the Africa Civil Society Conference on Drugs and Crime that took place in February 2022 was presented. George Ochieng Odalo, ExecutiveDirector of Slum Child Foundationspotlighted how drugs and crime affect young people in Africa, accentuating that “if there is not a close collaboration with the civil society it would be hard to save younger generations". There was widespread consensus about the need for civil society to raise their voices, as only through acquiring visibility, they could be considered by governments for policy outputs. The fruitful outcome of this Conference serves as a long-term, open-ended strategic plan that civil society can implement together with UNODC and African governments to ensure Crime and Drug prevention in the continent, in the context of the UNODC Strategy for Africa 2030.

Working together for a better response

During the third side event 'Responding to drug-related challenges in the cyberspace: Vulnerabilities and opportunities to engage civil society', organized by the UNODC CSU with the support of Switzerland and other partners, it was discussed how civil society can effectively contribute to addressing crime and other drug-related challenges in the cyberspace and how strong partnerships can be leveraged to effectively address these challenges. In this regard, Dr Kawal Deep Cour affirmed that to deal with this multidimensional threat, “civil society organizations should build bridges with policy-making institutions and become relevant in connecting public institutions with the private sector as well as in mobilizing communities and raising awareness among generations”.

The side events presented (i) the Asia-Pacific Common Position which is a roadmap for CSOs to address drug issues in Asia-Pacific and is supported by some 100 organizations; (ii) the Outcome document from the African Civil Society Conference on Drugs & Crime (21-23 February 2022), which analyses the interlinkages between drug and crime issues in Africa and provides seven forward-looking recommendations for CSOs, UNODC and Member States; and (iii) integrated responses to drug related challenges in cyberspace, including the need to involve the private sector. In addition to these side events, CSOs engaged in Informal Dialogues with the UNODC Executive Director, Ms Ghada Waly, the CND Chair, H.E. Amb. GhislainD'Hoopand the INCB President, Mr JagjitPavadia, in which all three leaders expressed the importance of and commitment to working with civil society in responding to the world drug problem.

Furthermore, the CSU and the VNGOC sponsored six regional hubs in Africa, Asia, and Latin America to facilitate the participation of civil society in the CND, including providing stable internet connections and venues.

In total, over 190 representatives of 86 CSOs were registered for the CND and 56 side events (out of 136) were organized by NGOs and many more are organized by Member States and UNODC together with NGOs.

Video summary of CSU side events