Regional Expert Group Meeting (REGM): Fostering Cooperation between the Public and Private Sector to Counter Trafficking in Persons in Asia-Pacific 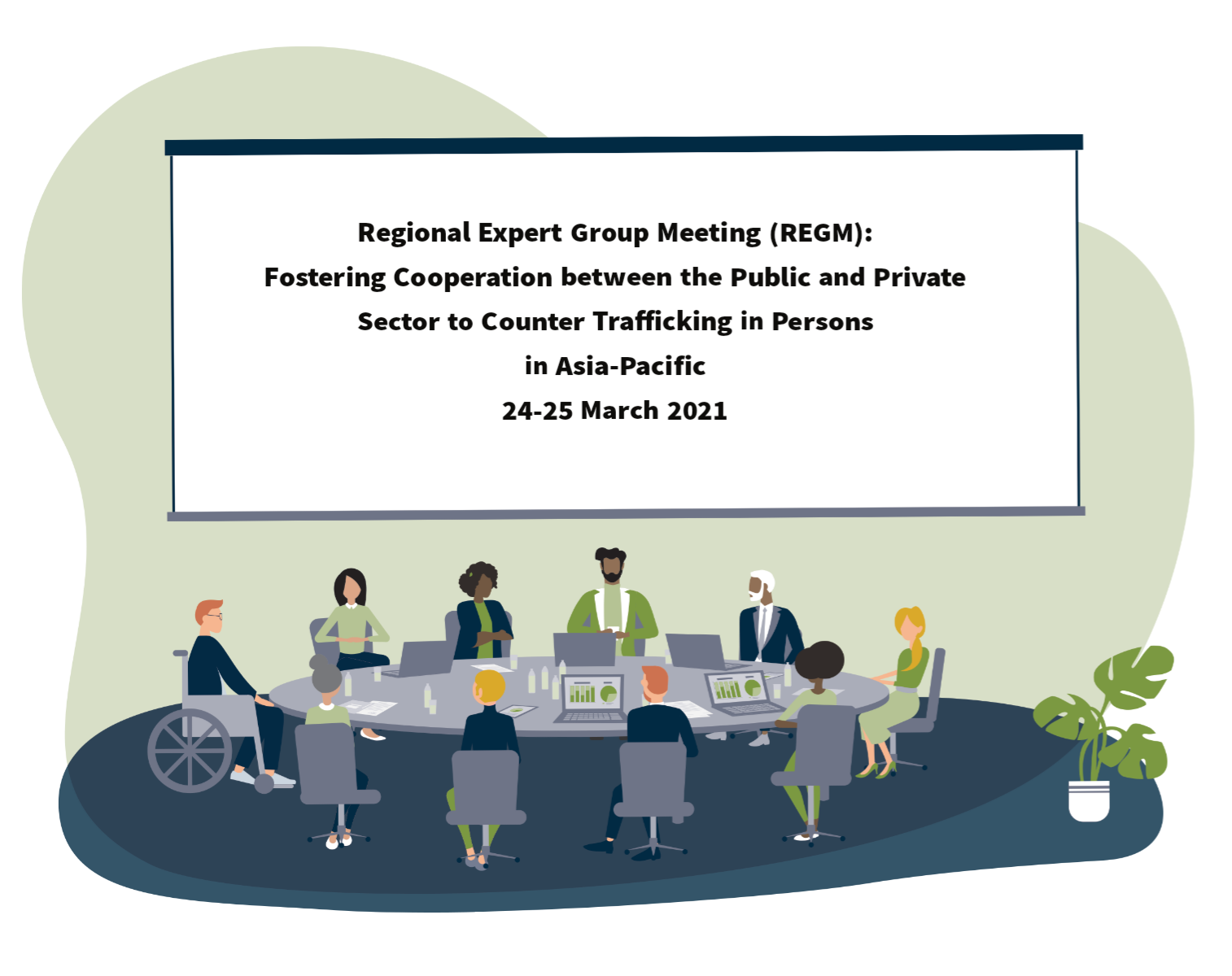 implemented by UNODC with the support of the Government of Germany

The United Nations Office on Drugs and Crime (UNODC) will hold an online Regional Expert Group Meeting (REGM) on ‘Fostering Cooperation between the Public and Private Sector to Counter Trafficking in Persons in Asia-Pacific’ on 24 and 25 March 2021. Further details on the logistical modalities and schedule of the REGM are available on its dedicated website here.

The REGM will contribute to a series of regional consultations forming part of the UNODC project ‘Public-Private Partnerships: Fostering Engagement with the Private Sector on the Implementation of the UN Convention against Transnational Organized Crime (UNTOC) and its Trafficking in Persons Protocol’ (‘PPP Project’). This PPP Project aims to improve effective partnership between the public and private sectors with a view to better assisting Member States in their implementation of the UNTOC and its supplementing Protocol to Prevent, Suppress and Punish Trafficking in Persons, Especially Women and Children (Trafficking in Persons Protocol).

One of the main outcomes of the PPP Project will be the development of a Compendium of Promising Practices on Public-Private Partnerships (PPPs) to Counter Trafficking in Persons (TIP). The Compendium will examine lessons learnt based on the analysis of existing PPPs and other forms of engagement with the private sector to prevent and combat human trafficking. Four REGMs focusing on South Eastern Europe (funded by a different donor), the Americas, Asia-Pacific and Africa will gather insights from various geographical perspectives. The REGMs will involve knowledge exchange with leading public and private sector stakeholders who have a vested interest in countering trafficking in persons. The REGMs will foster a common understanding of TIP, based on the TIP Protocol and the latest commitments of states. It will also introduce participants to UNTOC and its Review Mechanism. It will enhance the understanding on how partnerships with the private sector can assist Member States in their implementation of UNTOC and its Trafficking in Persons Protocol, and contribute to preventing trafficking, identifying traffickers and protecting victims.

The REGM will gather stakeholders of origin, transit and destination from the Asia-Pacific region. Relevant representatives will derive from governments, the private sector, as well as relevant civil society organisations and academia. Participants of the REGM will have a vested interest in addressing trafficking in persons through fostering PPPs. In order to facilitate focused, constructive, solution-oriented and critical discussions, participants will be expected to analyse the current challenges posed by trafficking to the private sector, exchange good practices on how to better engage on human trafficking prevention and share experiences on innovative approaches to addressing human trafficking at the country and/or regional level. There will be a specific focus on PPPs as they relate to countering trafficking from within the supply chain, the financial sector and the technology sector.

UNODC is the guardian of UNTOC and its Trafficking in Persons Protocol. As outlined in Article 32 of the Convention, the Conference of the Parties to UNTOC (COP UNTOC) was established to improve the capacity of States Parties to combat transnational organized crime and to promote and review the implementation of the Convention. For example, the tenth session of COP UNTOC adopted Resolution 10/3 which stresses the importance of partnership with the private sector. In paragraph 13, Resolution 10/3 encourages States, where appropriate, in accordance with domestic law and taking into account best practices or other promising measures developed in response to emerging trends in trafficking in persons, to: (d) undertake proactive parallel financial investigations, including through collaboration with public and private financial institutions, […]; (j) encourage the private sector to conduct due diligence with respect to their supply chains, including through measures to regulate, license and monitor public and private recruitment and employment agencies, including prohibiting recruitment fees being charged to employees, to help ensure that such agencies are not used to facilitate trafficking in persons; and (k) develop and implement national policies, in line with their national laws, to prevent trafficking in persons in government procurement and global supply chains, […].

Business leaders and private sector entities have the potential to support enhanced strategic responses to trafficking in persons, both at the national level and internationally. While the public sector leads crime prevention and criminal justice efforts, private sector enterprises can leverage their resources and networks to build sustainable and responsible businesses, raise awareness among employees, partners and clients in their companies, and contribute tools, critical data and instruments to help governments tackle the crime. Civil society and academia can also further complement those efforts by providing unique on-the-ground perspectives, highlighting the needs of trafficking victims, as well as developing rigorous research on the matter.

Examples of how PPPs can be effective in sustaining these efforts are multi-pronged. For instance, private sector companies have at their disposal a wide range of technological tools that can be used to support governments’ trafficking efforts. Private companies have the capacity to identify and address cases of trafficking and exploitation in their supply chain. In that regard, the public sector might acquire new skills and additional knowledge on sustainable procurement processes, how companies identify and manage risks and the multiple forms that trafficking can take. PPPs can also significantly facilitate investigations to trace financial gains from organized criminal activities such as those involving trafficking in persons.

Trafficking in Persons and PPPs in Asia-Pacific
Incidents of trafficking in persons in the wider Asia-Pacific are diverse and affect the subregions differently. UNODC’s recent global report on trafficking in persons found that victims from East Asia and the Pacific have been detected in, more than 60 countries across all subregions. Both the diversity of the flows and the number of victims detected indicate that trafficking from East Asia is of a global dimension. The flows from countries in East Asia to the Middle East and the European subregions are particularly significant. Victims have also been detected in North America, with a few detected in Central and South America. In addition, victims from East Asia have been repatriated from Sub-Saharan Africa.
In South Asia, the majority of detected victims are citizens of the country of detection or are trafficked from another country within the subregion. South Asia is an origin area for trafficking to the rest of the world. The main destinations appear to be the Middle East, East Asia and the Pacific, Western and Southern Europe and North America. South Asian victims were also detected, in limited numbers, in East and Southern Africa.

Nonetheless, important work is being done in this region, for example, the Association of Southeast Asian Nations (ASEAN) Convention on TIP (ACTIP) is widely ratified and serves as an important instrument for the region. ACTIP’s plan of action calls for the promotion of cooperation and coordination among governmental institutions, civil society organisations, private sector, media, and all relevant stakeholders to strengthen prevention and protection policies and programmes. It also seeks to increase awareness campaigns to educate all levels of society on trafficking in persons and its linkage to the violation of human rights, targeting those most at risk, with the effective involvement of mass media, relevant non-governmental organisations, private sectors, and community leaders. The Bali Process on People Smuggling, Trafficking in Persons and Related Transnational Crime (Bali Process) serves as an important platform for awareness raising of the consequences of people smuggling, trafficking in persons and related transnational crime in the region. Furthermore, a number of Asia-Pacific countries introduced the specific offence of trafficking in persons in accordance with the UN definition immediately after the entry into force

of the UN Trafficking in Persons Protocol showing a strong commitment to addressing the crime. Whilst these increasing and meaningful efforts should be commended, the use of PPPs to counter trafficking remains low in some countries of the region. Indeed, some private sector entities have engaged with public agencies, civil society and international organisations to help to counter trafficking, as is the case with the work under UNODC’s Blue Heart Campaign against human trafficking. However, more systematic and coordinated efforts to increase the use of PPPs and to enhance the level of private sector engagement is needed, including an exploration of how we can build on the current success to overcome regional challenges and create sustainable partnerships to counter trafficking between the public and private sectors, which this REGM will seek to do.

Objectives of the REGM
The objectives of this two-day REGM include supporting a coordinated and streamlined multi-stakeholder response to prevent and counter the trafficking of persons in Asia-Pacific, which will also assist in the implementation of UNTOC and its Trafficking in Persons Protocol. The REGM aims to identify effective methods, strategies, lessons learnt and promising practices to combat human trafficking through the creation of PPPs. It will involve the exchange of experiences and expertise amongst participants, international and regional organizations.

The overall aim of this REGM is to shed light on how the private sector, governments and relevant civil society organisations and academics in the region are working together to address trafficking in persons, to exchange on how they can strengthen such collaborations and create new meaningful ones,  with a view to successfully implementing  UNTOC and its Trafficking in Persons Protocol.

The REGM will also contribute to the PPP Project’s overall aim of fostering strategic partnerships, which will facilitate the prevention of trafficking, prosecution of traffickers, as well as the protection of trafficking victims. It will do this by providing a structured and moderated platform that will enable interactive and engaging discussions between public and private entities and civil society. The REGM will facilitate the sharing of knowledge and expertise to promote engagement with the private sector in order to address trafficking in Asia-Pacific. Additionally, it will seek to encourage the establishment of effective networks at the regional and global levels to counter this crime.

The REGM will be articulated around a series of sessions and use a variety of methods, including panel discussions, presentations and case studies. It will focus on the analysis of supply chains, the financial sector and the technology sector and their relation, role and/or vulnerability to trafficking. It will cover the following general topics:

Following a nomination and application process, the REGM will bring together PPP practitioners from origin, transit and destination countries within Asia-Pacific. The REGM will be held in English without interpretation.

a) The Public Sector

National and international public agencies within this region of focus will be invited to nominate a maximum of two expert officials working in the area of PPPs designed to prevent trafficking or protect victims of trafficking.

b) The Private Sector

Representatives from the private sector, particularly those working on corporate social responsibility, social performance, business and human rights, supply chain regulation and legal compliance – as their role relates to addressing human trafficking – will be invited to participate in the REGM to substantively discuss their experiences, best practice and expertise on PPPs to prevent and counter trafficking.

Civil society and academics with significant and concrete experience in creating or facilitating PPPs to prevent and counter human trafficking will be invited to share their views and insights of the same.

Selected experts of the REGM will be invited to prepare brief presentations relating to experiences, challenges, good practices and lessons learned on PPPs and their engagement to prevent and combat trafficking.

Ensuring gender balance is a priority in UNODC’s activities. For this REGM, maximum efforts will be made to achieve balanced gender representation. All organisations and agencies are therefore encouraged to nominate female experts and participants whenever possible.

This REGM will be held online in English only.

Interested participants from the private sector, civil society and academia may apply to participate in the REGM here. Government experts will be selected on the basis of nomination by their governments.