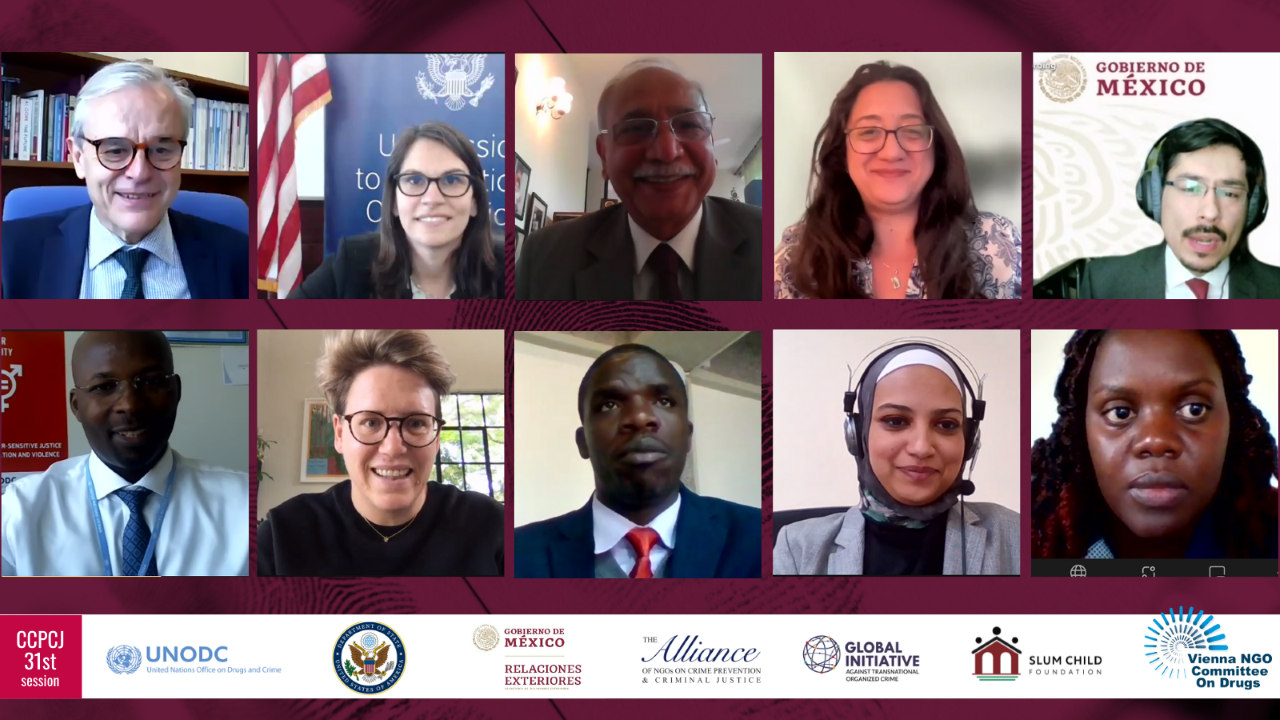 Vienna (Austria), 25 May 2022 – The regular thirty-first session of the Commission on Crime Prevention and Criminal Justice (CCPCJ) took place in Vienna in a hybrid format.

Non-Governmental stakeholders, including civil society, academia, and the private sector, are important in preventing and countering transnational organized crime. This was mentioned at the NGO Briefing in the margins of the 31st CCPCJ by Mirella Dummar Frahi, chief of UNODC Civil Society Unit (CSU) and Anna Alvazzi del Frate, Chair of the Alliance of NGOs on Crime Prevention and Criminal Justice.

The session presented several opportunities to civil society, including an Informal Dialogue with the UNODC Executive Director, Ghada Waly who addressed 11 questions on UNODC's work in combating crime and building community resilience, as well as the need to further engage youth and focus on the most vulnerable. Ms. Waly stated that during 2020 – 2021, UNODC engaged with 2,253 civil society organizations, and she is eager to maintain and strengthen these partnerships.

In order to address transnational organized crime at the national, regional and international levels, the role of civil society is fundamental for the added value provided in, education in communities, data analysis, as well as through wider public awareness about the root causes and impact of transnational organized activities. To discuss this, UNODC`s Civil Society Unit organized a side event on “Partnership-based prevention of organized crime: promising practices in the implementation of UNTOC review mechanism”, co-hosted by the governments of the United States and Mexico. Both governments are strong supporters of non-governmental stakeholders’ engagement in the Review Mechanism of the UN Convention against Transnational Organized Crime (UNTOC).

At the opening of the event, which was attended by some 135 participants, Jean-Luc Lemahieu, Director of Division for Policy Analysis and Public Affairs of UNODC reminded that civil society and academia provide unique on-the-ground perspectives, and the need to include organized crime victims in finding solutions and in delivering much needed services – sometimes in place of governments. Christine Cline, Division Chief of the Office of Global Programs and Policy at the United States Bureau of International Narcotics and Law Enforcement Affairs (INL), stressed that civil society is effective key player in fighting transnational organized crime and key to achieving a positive impact in the long-term. “The governments need civil societies’ efforts and engagement for a fruitful outcome of UNTOC review” - added Christine Cline.

Representing the Government of Mexico, Mauricio Zapata Zaldívar, Director for Crime Prevention and Anti-corruption in the Foreign Ministry added that governments should value the work of civil society and find spaces for their contribution. “The main goal is not only to fight crime, but find the ways and routes to prevent crime, listen to and collaborate with relevant stakeholders and learn from each other’s strategies and challenges to find the best possible solution” - noted Mauricio Zapata Zaldívar. Tuesday Reitano, Deputy Director at the Global Initiative against Transnational Organized Crime (Gi-TOC) noted that awareness of the UNTOC as a mechanism is very low among the civil society communities, and even lower is the awareness of resources that enable them to engage. Tariq Khosa, Director of Partnership and Legal Affairs at the Centre for Governance Research (CGR)-Pakistan explained that the “Partnership Paradigm” lead to strengthening community and civil society is the main key to achieve this strategy.

The other side event supported by the CSU focused on Cross-cutting evidenced-based interventions on drugs and crime in Africa for the implementation of UNODC Strategic Vision for Africa and was organized by the Slum Child Foundation with the support, of the Alliance of NGOs on Crime Prevention and Criminal Justice and Vienna NGO Committee on Drugs. Topics discussed included crime prevention and drug abuse among youth as well as illicit trafficking and cybercrime. The speakers agreed that the empowerment of young people as change agents as well as the relevant and credible data and tools will have a positive effect on combating crime.

The socio-economic background of young people is decisive in the fight against crime. Abuse, unemployment, low parenting or even poor performance in school accentuates low expectations and thus vulnerability to drugs, crime or terrorism for young people. Successful interventions should strengthen protective factors and remove stressors, for a holistic strategy in addressing drugs and crime. During the session, non-governmental participants also had an opportunity to engage directly with the CCPCJ Chair H.E. Ambassador Takeshi Hikihara of Japan to discuss crime prevention and the role of civil society in supporting Member States in implementing their international commitments.

The participation of civil society in the 31st session of the Crime Commission also featured 17 civil society speakers who addressed the commission on various agenda items, both in-person and online.

There was broad agreement for civil society to work in partnerships and to engage more with each other and their governments, as it takes a network to defeat a network. To be considered by governments for policy recommendations and outputs, more work on the ground level is needed and close cooperation with other non-governmental stakeholders is vital.

UNODC implements projects that aim to facilitate the engagement of non-governmental stakeholders in crime prevention and fighting corruption. The participation of civil society in the 31 session of the Crime Commission was done in collaboration with the Alliance of NGOs on Crime Prevention and Criminal Justice.