31st Session of the CCPCJ: From EJN to SEAJust: Strengthening inter-regional cooperation in criminal matters through regional networks

The Global Programme to Strengthen Capacities of Member States to Prevent and Combat Transnational Organized and Serious Crime (GPTOC) held the side event “From EJN to SEAJust: Strengthening inter-regional cooperation in criminal matters through regional networks” in the margins of the 31st Session of the UN Commission on Crime Prevention and Criminal Justice (CCPCJ), together with the Office of the Attorney General of Thailand, the Ministry of Justice of the Republic of Korea, and the European Judicial Network (EJN) on 19 May 2022 in a hybrid format. 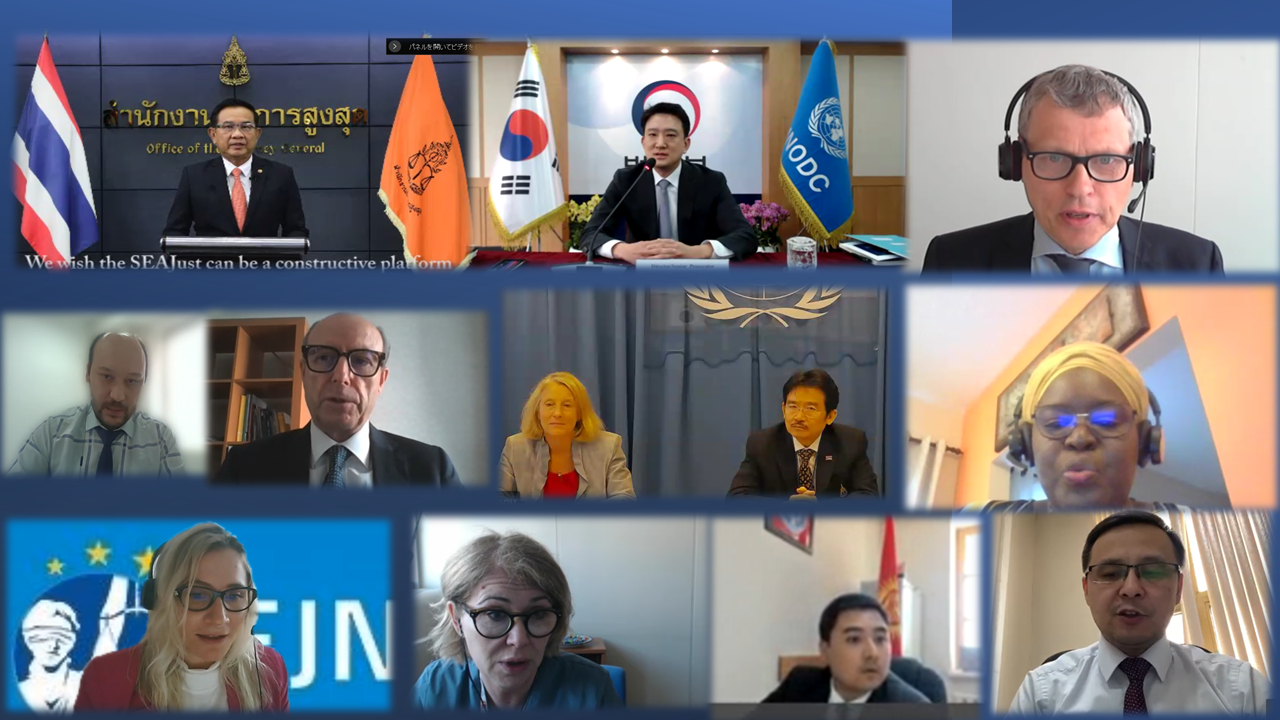 The event was opened with remarks from Mr. Singhachai Taninson, the Attorney General of Thailand, who highlighted the complicity of the pattern of crimes in this fast-changing globalization and the necessity for countries to cooperate with each other to effectively combat transnational organized crime and wished the South East Asia Justice Network (SEAJust) to be a more constructive platform in this regard.

Mr. Rha, Wook Jin, the Director of International Criminal Affairs Division, Ministry of Justice of Korea stressed the importance of information sharing based on trust among the officers responsible for international cooperation in criminal matters to effectively combat cross-border crime, and in order to cope with the rise in the number of MLA and extradition cases in the region, Korea will continue to cooperate with UNODC in the operation of networks, especially SEAJust.

Mr. Ola Löfgren, the Secretary of the EJN, the oldest of such networks with almost 25 years of history, stressed the importance of the role of the Secretariats of the networks which will serve as the memory of their operation and bring together their contact points.

Mr. Luis Francisco De Jorge Mesas, Criminal Justice and Crime Prevention Officer of UNODC noted that judicial cooperation networks supported by UNODC were established on the model of the EJN, which is based on human elements and trust between the nationally appointed contact points.

Mr. Jumpon Phansumrit, Director General, Office of the Attorney General of Thailand, and the contact point of the SEAJust, provided an overview of the membership and role of the network and reported its achievements and milestones since its launch in March 2020.

The contact point of the West African Network of Central Authorities and Prosecutors (WACAP) introduced the challenges in MLA process in this region at the time of its establishment, such as lack of informal consultation channels and expertise, and reported that WACAP has contributed to overcome many of such obstacles by serving as a liaison between the participating countries.

The contact point of the Judicial Cooperation Network for Central Asia and Southern Caucasus (CASC) together with Mr. Tilek Kudaiarov, Senior Prosecutor in the Prosecutor General’s Office of the Kyrgyz Republic, and Mr. Nurman Dairabayev, Officer of the General Prosecutor’s Office of the Republic of Kazakhstan reported the growing number in cases of organized crime in countries of Central Asia, especially trafficking in persons, and emphasized the need to enhance the capacities of criminal justice systems in the region.

Ms. Ianina Gabriela Lipara, Coordinator of the EJN Secretariat, reported that EJN has supported more than 70,000 requests for cross-border investigation over the last 10 years, and introduced the assistance they provided in some of the cases such as corruption and drug trafficking.

The coordinator of the Global Operational Network of Anti-Corruption Law Enforcement Authorities (GlobE Network), new substantive network established in June 2021, provided information regarding the purpose and operation of the network, and stated that by collaborating with UNODC supported judicial cooperation networks further synergies for effective investigation in corruption will be expected.

The meeting was closed with remarks by Ms. Karen Kramer, Senior Expert, Criminal Justice and Crime Prevention Officer of UNODC, who thanked the enthusiasm of the participants and all the stakeholders working on this issue and called for further cooperation toward combatting transnational organized crime.