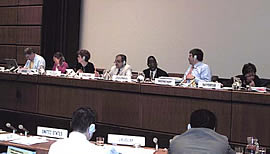 VIENNA, 11 August (UN Information Service) -- Major breakthroughs were achieved during the sixth session of the Ad Hoc Committee for the Negotiation of a Convention against Corruption, held in Vienna from 21 July to 9 August, including an agreement on the recovery of assets resulting from corruption and on a broad scope of preventive measures.

The Ad Hoc Committee, negotiating the treaty, worked until 3:56 a.m. on 9 August, before running out of time. It then decided to meet again on 29 September in order to settle several elements of the draft that still need to be elaborated before the Convention is submitted to the UN General Assembly for final approval.

"We are very close to an agreement. Indeed the session achieved major breakthroughs on the most politically sensitive issues: a clear sign that Member States -- all of them, rich and poor countries, whether having a history of corruption or not, -- want this Convention, and they want it very badly. That gives us grounds for optimism that the negotiations will be successfully completed in September, so the Convention will be presented to the General Assembly this fall, and subsequently to the Ministerial Signing Conference to be held in Merida, Mexico, from 9 to 11 December," said Antonio Maria Costa, Executive Director, UN Office on Drugs and Crime (UNODC).

One of the most important results of the sixth session was the adoption on 7 August of a whole new chapter requiring Member States to return those assets, obtained through bribery and embezzlement, to the country of origin. This represents a new fundamental principle in international treaties. In the case of other forms of corruption, the return of assets will be based on satisfactory evidence of legitimate ownership and of damage, and requests for recovery will receive favourable consideration.

Asset recovery has been a major issue throughout the negotiations. In a number of countries, corruption has led to the depletion of national wealth. Some of those countries, whose former dictators have stolen hundreds of millions, or even billions, of dollars, have made a great contribution in the search for new rules, including the Philippines and Nigeria.

"Stolen and illegally exported assets have to be returned. This is a new, fundamental principle agreed to during the negotiations in Vienna. The recovery of assets sets the stage for much greater cooperation between states. There will be fewer ways and places to hide stolen assets and a much greater likelihood that the money will be returned," Mr. Costa said.

The agreement reached on preventive measures represents another major achievement during the sixth session. The agreement includes norms of conduct for public officials, greater transparency based on public access to information on government businesses, as well as stricter procurement regulations and measures against money laundering.

Late on 8 August, the Ad Hoc Committee also progressed in the discussion on a few outstanding issues, including dual criminality -- whether a particular action has to be considered a crime in both countries in order for the latter to cooperate; and differences over the definition of "public official."

Once adopted, the UN Convention against Corruption will enhance cooperation between governments and help standardize the way in which individual countries deal with corruption in their national legislation. "The Convention will pave the way for a more unified international response and stimulate better cooperation," said Eduardo Vetere, Officer-in-Charge, UNODC Division for Treaty Affairs. "The Convention will reduce the vulnerability of those states calling for cooperation against those fleeing prosecution."

The Ad Hoc Committee for the Negotiation of a Convention against Corruption was established by the UN General Assembly in December 2000. The initial draft of the Convention was based on proposals received from 26 countries, covering a broad range of issues, such as the following: definitions and scope; preventive measures and criminalization; sanctions and remedies; confiscation and seizure; jurisdiction; liability of legal persons; protection of witnesses and victims; international cooperation; preventing and combating the transfer of funds of illicit origin derived from acts of corruption; the return of such funds; technical assistance; collection, exchange and analysis of information; and mechanisms for monitoring implementation.

The first session of the Ad Hoc Committee was held in January 2002. At its first and second sessions, the Committee concluded the first reading of the draft Convention. At the third and fourth sessions, the second reading was completed. At the fifth session, in March 2003, the Committee reached an agreement on a significant number of articles, including those dealing with basic offences regarding bribery of public officials and embezzlement; on other offences to be criminalized; and on almost all of the provisions on international cooperation.

The sixth session lasted a week longer than the previous five, and included evening sessions, but -- after a debate lasting through to the early morning hours of 9 August -- delegates from 128 Member States decided to continue working on the Convention on Corruption's final details on 29 September.