VIENTIANE, 14 February 2006 - The head of the United Nations drugs agency called on Tuesday for sustained international support for former opium farmers in Laos to ensure that poverty does not force them to re-start cultivation of the drug.

Antonio Maria Costa, Executive Director of the United Nations Office on Drugs and Crime, congratulated the Government of Laos for reducing opium production by 93 percent over the last seven years.

"The progress that Laos has made is quite momentous when we consider that until the mid-1990s it was the third largest producer of illicit opium in the world," he said at ceremonies in the Laotian capital to mark the virtual eradication of opium production.

"Today, we can safely assume that Laos is no longer a supplier of illegal opiates to the world market. Production has not ceased entirely, but the opium still grown here is consumed by the country's approximately 20,000 opium smokers. Many of them are undergoing treatment or rehabilitation."

Mr Costa said the challenge now was to ensure that Laos, one of the poorest countries in the world, remained opium-free

"Laos is at a critical juncture. The tremendous successes that have been achieved could be reversed if sufficient assistance is not provided," he added. "This would have worrying implications for security and economic development throughout the region."

"I urge the richer countries to help Laos give poor farmers who relinquish opium cultivation sustainable alternative sources of income. Not enough has been done so far," the UNODC Executive Director said.

"We have a collective responsibility to ensure that the poorest of the poor are not the ones who pay the price for successes in drug control. I urge donor countries and development agencies to join forces with us to make sure this drug control success is also a humanitarian success."

The UNODC recently agreed a new Strategic Programme Framework for Laos involving projects totalling $18.4 million in the period 2006 to 2009. Most of the money will be spent on alternative development.

He called on the Laotian government to remain vigilant on opium cultivation in the coming years. "Even some 10 years after Thailand and Viet Nam officially eliminated opium, they still have to eradicate many hectares of opium poppy every year," he said. 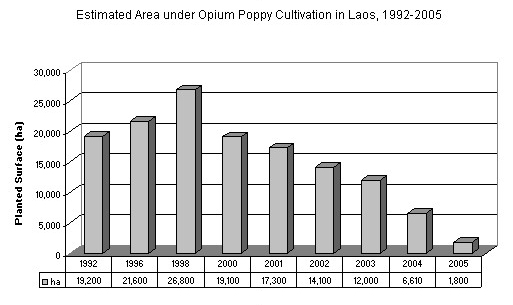