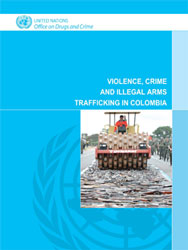 BOGOTA, 20 December 2006 (UNODC) - Colombia needs to do more to crack down on organized crime and illicit trafficking in firearms and ammunition, but the perception that the country is plagued by a culture of indiscriminate violence is incorrect, a new report by the United Nations Office on Drugs and Crime shows.

The report, entitled Violence, Crime and Illegal Arms Trafficking in Colombia, says that, paradoxically, the use of firearms in the country is highly controlled and regulated by different actors, including criminal gangs and rebel groups as well as the Government.

"The problem is that although these illegal arms are relatively 'controlled', they are used very efficiently to generate levels of lethal violence unlike those in the rest of the world," the report said.

"The Government therefore has a major challenge to disarm such groups and reduce violence," said UNODC Executive Director Antonio Maria Costa. "It also needs to strengthen gun control by increasing penalties for arms trafficking and the illegal carrying of arms."

Although Colombia has one of the highest homicide rates in the world, the UNODC report shows there is little evidence of random killings.

"Violence in Colombia is not indiscriminate or generalized but is highly selective," said Pablo Casas, director of the study.

The report shows that the flow of illegal weapons into the country is limited, but weapons are constantly recycled and are used efficiently. This made it all the more important to control the flow of ammunition. "This could potentially become even more critical than the illegal trafficking of arms," the report added.

Reviewing Colombia's experience with the disarmament, demobilization and reintegration of rebel groups, the report concluded: "Voluntary disarmament campaigns and restrictions on carrying legal arms have had marginal effects in reducing violence as this violence is mainly exercised by criminal groups."

While the report said Colombia deserved praise for its regional and international efforts to regulate small arms and light weapons, there were weaknesses in a number of areas.

These included lack of institutional capacity to control illicit trafficking, insufficient international cooperation, especially on the part of neighbouring countries, the handling of disarmament processes, the control of arms in the hands of private security companies and the processing of information regarding arms and crime.

Law enforcement agencies lack the operational capacity and autonomy to work effectively and there is a significant gap between intelligence and operations. "With respect to illicit trafficking in arms, preventive intelligence is practically non-existent," the report showed.

The fact that carrying weapons illegally does not necessarily entail a prison sentence has extremely serious consequences. "Often, possession of a weapon is the only evidence the authorities can use to prosecute suspects for serious offences such as drug trafficking, crimes against humanity and illicit trafficking in arms," the report said.