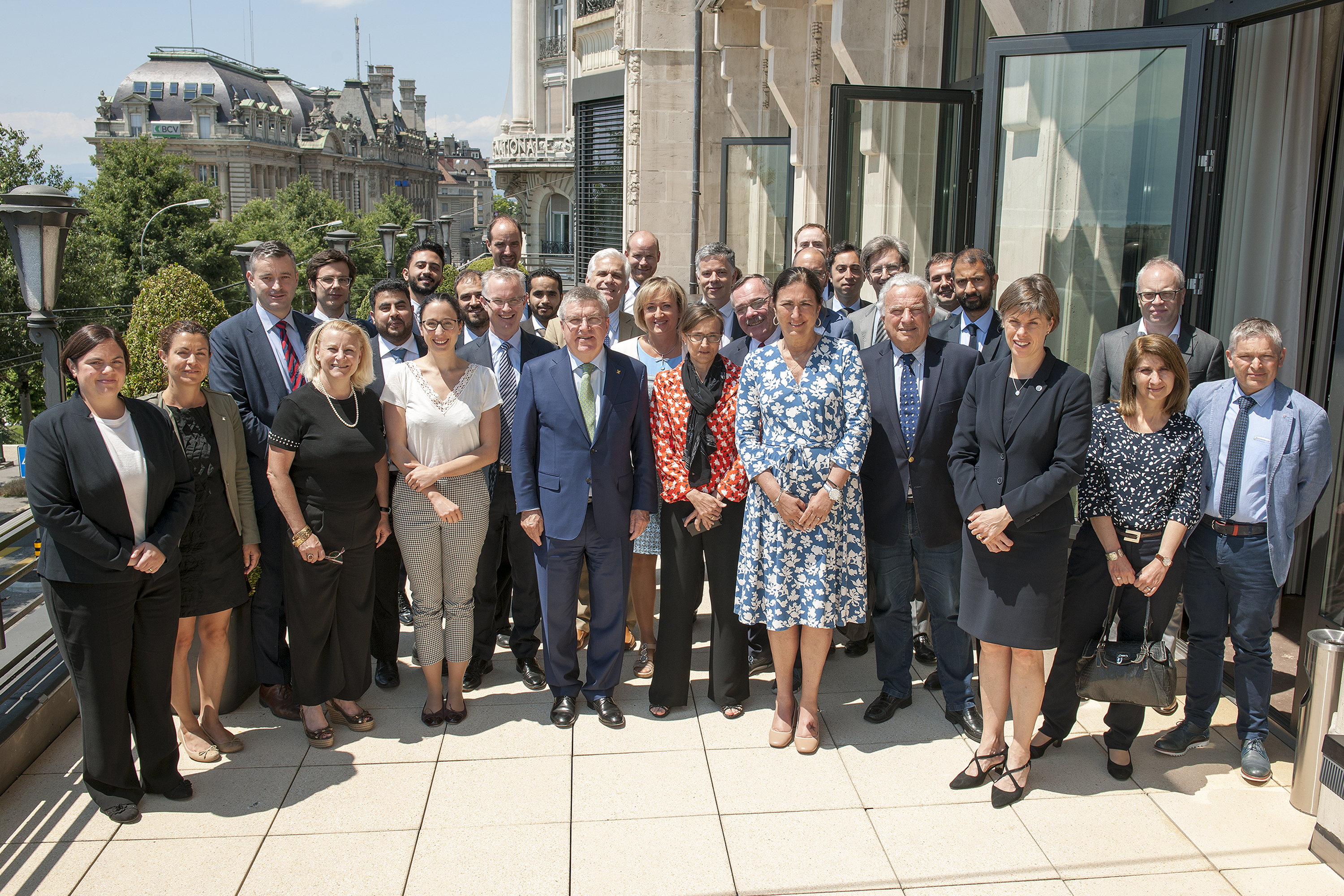 The International Partnership against Corruption in Sport (IPACS) - a multi-stakeholder platform composed of the International Olympic Committee (IOC) and other international sports organisations, governments and inter-governmental organisations such as the OECD, the Council of Europe and UNODC - met in Lausanne on 29 June 2018 to evaluate their recent efforts in addressing pressing issues in sport.

Addressing the meeting participants, IOC President Thomas Bach said: "Sport, like all other areas of society, cannot be immune from corruption. Our challenge is to act quickly and effectively when it occurs. This is crucial to protecting our integrity and therefore our credibility. The huge value of IPACS is that it brings together key partners from international sport, government and inter-governmental organisations. They can work together in an effective and pragmatic way that avoids creating unnecessary bureaucracy."

During last week's meeting, each taskforce presented a progress report to the IPACS Working Group on the efforts undertaken in their respective areas over the past six months.

Having reviewed previous major sporting events requiring the construction or significant redevelopment of existing infrastructure, Task Force 1 noted that the implementing agencies were mostly institutionalised public bodies usually using an open tender as the preferred procurement procedure. Overall, transparency throughout the development cycle diminished, with the number and nature of amendments in each individual infrastructure/procurement project remaining largely unknown. The Task Force also identified a general lack of specific corruption and fraud risk management strategies. The analysis will lay the foundations for developing concrete tools and guidance for sports organisations (such as Olympic and Paralympic Games Organising Committees), public authorities and other bodies involved in staging major sports events, in order to mitigate risks of fraud and corruption throughout the procurement cycle.

Task Force 2 identified a number of key elements which may cause a potential, perceived or actual conflicts of interests in the selection of major sports events. These elements include stakeholder representation, loyalty issues, networks of influence, and competing economical, financial and institutional interests. As a next step, the group will identify best practices to address and manage different types of conflicts of interests linked to the awarding of major sporting events.

Task Force 3 is in the process of developing good governance indicators on the three specific areas of term limits, financial transparency and management of conflicts of interests. The aim is to provide a common benchmark recognised by both public authorities and sports organisations which can be used when adopting charters or evaluation tools on good governance. This Task Force is building on work already performed by the Association of Summer Olympic International Federations (ASOIF).

Interest in the Partnership has grown significantly since its formation, and its aims and programme of work have been discussed at numerours international events, including the 14 th Council of Europe Conference of Ministers Responsible for Sport; the recent conference on Safeguarding Sport from Corruption organised in the context of resolution 7/8 on corruption in sport, adopted last November by the Conference of States Parties to the United Nations Convention against Corruption; and the G20 governments.

Attending the meeting, Ronan O'Laoire, Crime Prevention and Criminal Justice Officer at UNODC, said: "The resolution on corruption in sport, which was recently adopted by over 180 Goverments, sets out the different areas and actions needed to address this significant problem. By bringing together international experts and mobilising support and resources, the value of IPACS as a multi-stakeholder initiaitive is that it can significantly help governments and sports organisations to implement this important resolution and maximise the impact of joint efforts that tackle corruption in sport."

The IPACS Working Group meeting was also attended by Nicola Bonucci, Director and Accession Coordinator of the OECD Directorate for Legal Affairs, who said: "IPACS is the only multistakeholder partnership of its kind committed specifically to fighting corruption in sport. By working together, this still-new Partnership has the potential to effect real change in ensuring integrity in sport."

IPACS core group member Hitesh Patel, Head of International Sport, Major Sports Events and Sports Integrity at the UK Government's Department for Digital, Culture, Media and Sport, said: "IPACS has grown organically since the London Anti-Corruption Summit and last year's IFSI Forum. The Working Group very much welcomed the IOC President joining us to reiterate the sports movement's commitment to tackling corruption in sport, which governments have also committed to through this partnership. Both the Working Group and the Task Forces are working hard to produce practical outputs which we will make widely accessible as they are delivered."

The progress on the work being carried out by the IPACS will be showcased during the Olympism in Action Forum, which will take place on 5 and 6 October 2018 in Buenos Aires, Argentina. The next IPACS Working Group meeting is scheduled for December 2018 in London, where the first concrete results of the Task Forces' work should be discussed.

Click here for the list of participants at the IPACS Working Group meeting in Lausanne on 29 June 2018.

IPACS was launched at the IOC's International Forum for Sports Integrity (IFSI) in February 2017 following a call made by leaders at the 2016 London Anti-Corruption Summit for a coordinated response to tackle corruption in sport. It is a multi-stakeholder platform with the mission "to bring together international sports organisations, governments, inter-governmental organisations, and other relevant stakeholders to strengthen and support efforts to eliminate corruption and promote a culture of good governance in and around sport". The core group is composed of the IOC, the United Kingdom Government, the Organisation for Economic Cooperation and Development (OECD), the Council of Europe and the United Nations Office on Drugs and Crime (UNODC).