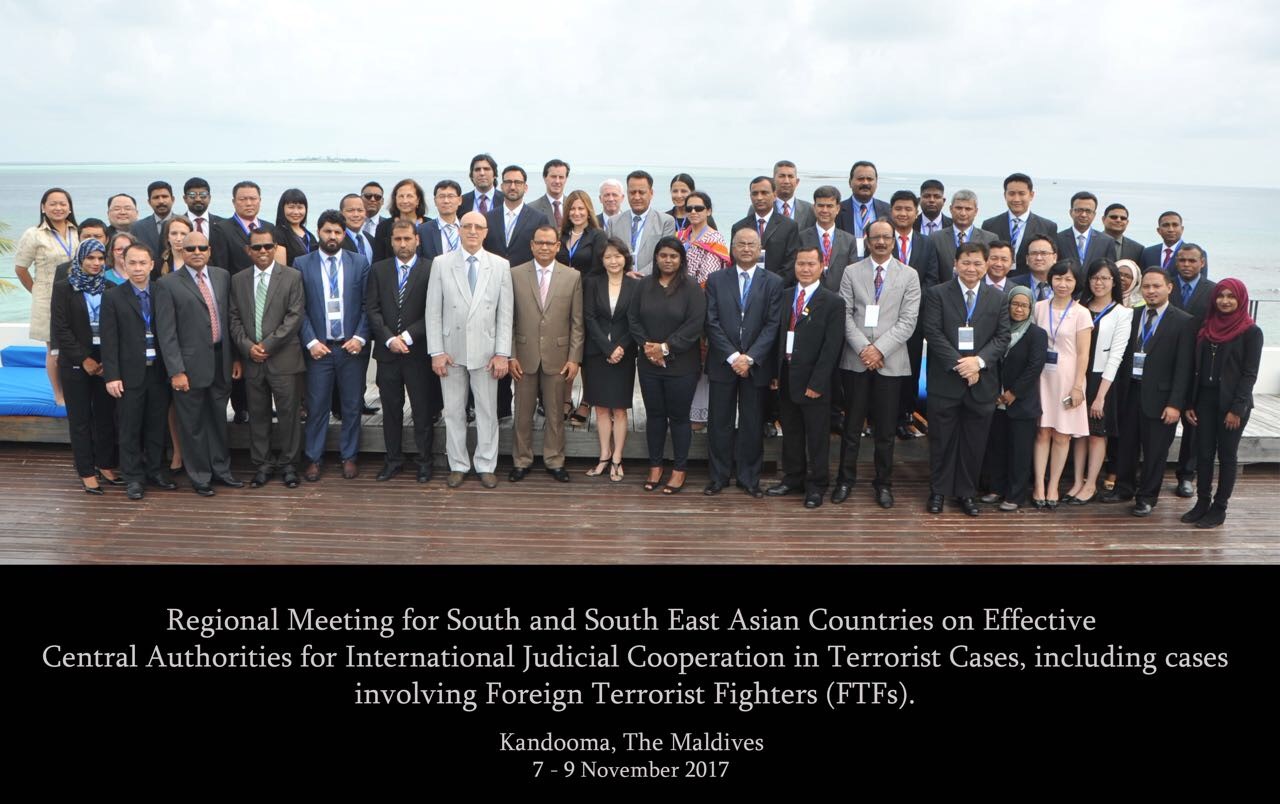 UNODC, namely its Terrorism Prevention Branch, the Regional Office for South Asia  and the Regional Office for South-East Asia and the Pacific, together with the Counter-Terrorism Committee Executive Directorate (CTED) organized a regional meeting for South and South East Asian countries on effective Central Authorities for international judicial cooperation in terrorist cases, including cases involving foreign terrorist fighters (FTFs).

The meeting was hosted by the Government of the Maldives, from 7 to 9 November 2017, thanks to the generous contributions from the Governments of Japan and Canada. It is part of combined efforts by UNODC and CTED to implement a global initiative on building effective Central Authorities for international judicial cooperation in terrorism cases. About 70 participants from more than 15 countries in South and South East Asia attended the meeting, which was opened by Hon Adam Shareef Umar, Minister of Defense and National Security.

The initiative was launched at the Global Meeting held in Cartagena de Indias, Colombia, in February 2013. The second regional meeting was held in Marrakesh, Morocco, in January 2014, and enabled the practitioners from the MENA region engaged in the daily processing of mutual legal assistance (MLA) and extradition requests to share good practices and to help identify areas where additional attention was needed. The third regional meeting took place in Vilnius in November 2014. It gathered legal, judicial and law enforcement officials from 15 OSCE (Organization for Security and Co-operation in Europe) participating States and international as well as regional organizations to discuss the functioning of Central Authorities in the beneficiary countries, good practices and challenges in processing MLA and extradition requests in terrorist cases.

Building upon the previous events implemented under this global initiative, this fourth regional meeting for South and South East Asian countries aimed to promote the effective functioning of Central Authorities in the two regions. It did so by providing participating Member States with advice and technical support in order to increase the capacity of relevant staff and designated focal points of international cooperation networks and  to produce a register of Central Authorities for international cooperation in terrorist cases.

This meeting also provided a unique platform for participants engaged in processing MLA and extradition requests in the regions to network with their counterparts as well as to discuss challenges and solutions in providing expeditious responses to such requests.