Since the 2003 Bali bombing the Indonesian Government has taken firm action against terrorism, resulting in a wave of arrests that disrupted terrorist activities in the country. Despite the establishment of national legislation to compensate victims, providing access to justice and fair treatment by way of restitution and compensation remains an ongoing challenge for the Government.

In supporting the Government of Indonesia to improve the legal framework for compensation for victims of terrorism, UNODC's Terrorism Prevention Branch (TPB), in collaboration with Indonesia's Witness and Victim Protection Agency (LPSK) and the Ministry of Foreign Affairs, organized a workshop in Jakarta on 30 March, 2017, funded by the Netherlands. The workshop was attended by 110 participants which consisted of Government representatives, civil society groups working in support of victims of crimes, and victims of terrorism themselves.

The workshop was launched by H.E. Mr. Wiranto, Coordinating Minister for Politics, Law, and Security, who highlighted the importance of compensation of rights of victims of terrorism. Mr Wiranto also expressed his hopes that compensation measures be included in the revision of the Anti-Terrorism Law in order to strengthen the legal provision of support to victims of terrorism.

Mr. Collie F. Brown, UNODC Country Manager, highlighted that while compensation is an important right of victims of crime, it can be difficult to implement.  He also acknowledged the long standing partnership between UNODC and LPSK.

"While monetary compensation and financial support will never remove the damage and harm which victims of crime suffer, it is important both as recognition of the profound disruption and impact which crime has on their lives," said Mr. Brown.

Mr. Abdul Haris Semendawai, Chairman of the Witness and Victims Protection Agency, delivered remarks on the status of compensation for victims of terrorism in Indonesia. He explained that based on Law No. 31/ 2014 on witness and victim protection, the State is not only responsible for preventing and countering terrorism, but also for providing compensation to victims of terrorism. Furthermore, in order to ensure that all victims can receive access to justice, treatment and compensation, a national framework on compensation involving other Government institutions should be established.

Mr. Phillip Divett, Programme Officer from TPB, delivered a presentation on the comparative international approaches for compensating victims of terrorism. Examples of experiences and programmes in several countries to support victims of acts of terrorism, addressing relevant international standards and norms as well as national legislation were also showcased.

"While it is true that there is no 'one size fits all' approach to these types of issues, there might be elements of systems used in other jurisdictions that are useable in Indonesia," said Mr. Divett, who reiterated UNODC's commitment to supporting Indonesia's efforts in strengthening national framework on providing access to justice, fair treatment, restitution and compensation for victims of terrorism. 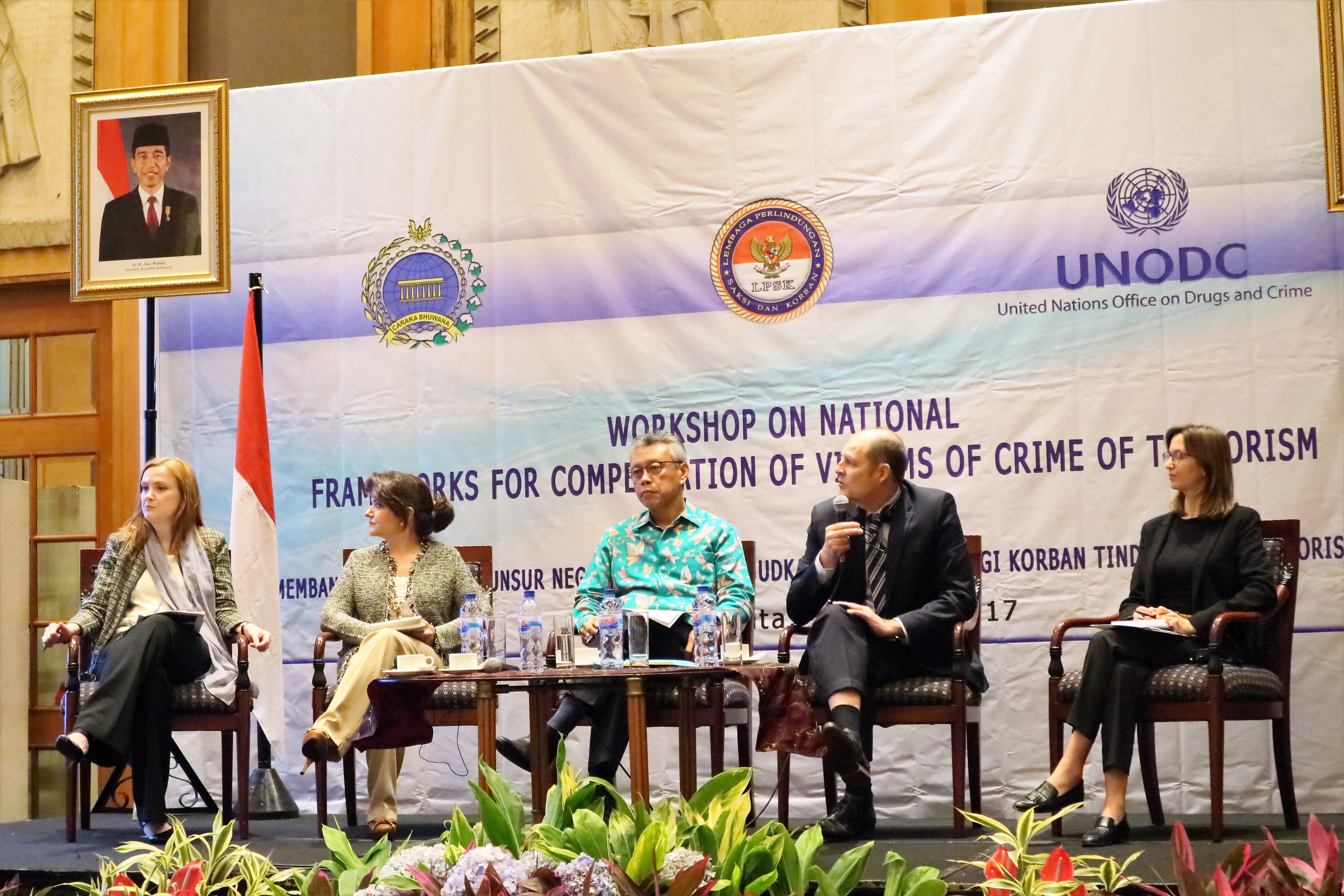