It brought together representatives from the Ministries of Interior and Justice, as well as from customs, financial police, the Financial Intelligence Unit, the Basic Public Prosecutor's Office for Prosecuting Organized Crime and Corruption, the National Committee for the Prevention of Violent Extremism and the Fight against Terrorism, as well as representatives from the Ministry of Defence. Experts from France, the European Union and UNESCO shared their experiences relevant to cases involving or related to FTFs.  The event aimed to respond to one of the needs identified during the first regional event for South Eastern Europe organized in Vienna in February 2017, namely capacity-building on efficient investigation and prosecution of FTF cases.

The workshop allowed for the exchange of experiences and good practices on the common challenges faced by national institutions in investigating and prosecuting FTF cases, with a focus on the illicit trafficking in cultural property and its linkages with the financing terrorism.  In addition, presentations on terrorism cases and national efforts in countering violent extremism were facilitated. Furthermore, a presentation was delivered by the Radicalization Awareness Network, European Commission;  a platform which brings together practitioners from around Europe working on the prevention of radicalization.

The event was organised under UNODC's Initiative on Strengthening the Legal Regime against FTFs in the Middle East, North Africa and South Eastern Europe, funded by the European Union. The project aims to assist beneficiaries in improving their criminal justice responses to FTFs, in compliance with United Nations General Assembly resolution 68/276 and United Nations Security Council resolutions 2170 (2014), 2178 (2014) and 2396 (2017).

Under this initiative, four national workshops are planned to be held in the beneficiary Member States from 2017 to 2020. The first national workshop for the former Yugoslav Republic of Macedonia was held in Skopje in September 2017, and focused on the normative and administrative challenges relating to the FTF threat. 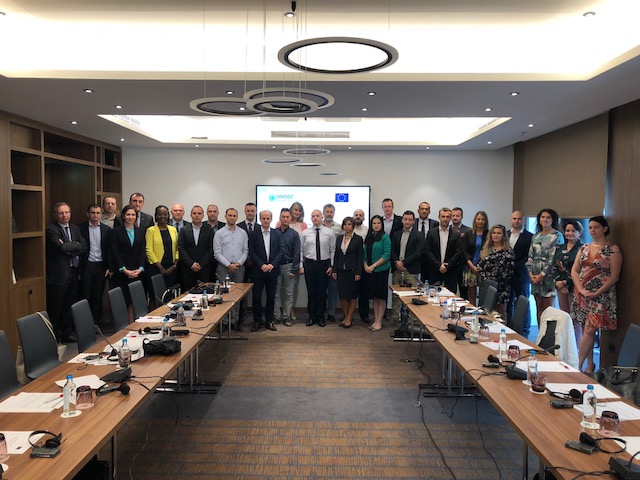