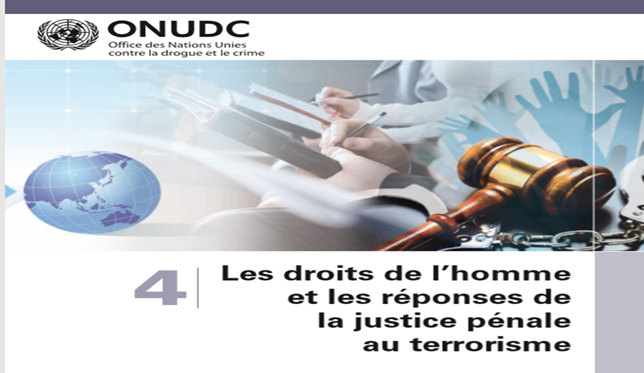 In recent years, Burkina Faso and Cameroon have increasingly faced serious threats from terrorism.  Cameroon, like the other countries of the Lake Chad Basin region, has been increasingly affected by the terrorist group Boko Haram. Burkina Faso has been confronted by deadly terrorist attacks with increasing frequency which have spread to the capital as well as several provinces.  This has led to hundreds of deaths in both countries as well as hundreds of suspected terrorists being detained.

The importance of addressing these challenges in a human rights compliant manner has become increasingly recognized.  Research by the United Nations Development programme in the report,  "Journey to Extremism in Africa" has highlighted the importance of respect for human rights and the rule of law in counter-terrorism efforts in order to avoid exacerbating violent extremism.

In this context, in January 2019, UNODC delivered two national training workshops on human rights in criminal justice responses to terrorism in Burkina Faso and Cameroon with funding from the Government of Canada and in close collaboration with the Office of the United Nations High-Commissioner for Human Rights. These workshops enabled participating civilian and military judges, investigators and prison officials to confront key issues related to human rights in the fight against terrorism.

Most importantly, the two workshops were delivered primarily by Burkinabe and Cameroonian national experts previously trained by UNODC through a sub-regional train-the-trainer course on human rights and counter-terrorism organised by UNODC in 2018. The national workshops offered a platform for trainers to put into practice the adult training methodology, skills, and knowledge that they had acquired.

The workshops were very well received by the national officials, with a Cameroonian judge from the military court noting that 'the workshop helped national officials to understand that effective action against terrorism and the protection of human rights are not contradictory, but have complementary and synergistic objectives. I came back from the training with recommendations that could help reconcile the fight against terrorism and respect for human rights."

In Burkina Faso, a trainer explained that "the workshops enabled us to have a practical approach and belief to protect human rights even in the most extreme situations, such as terrorism. As a national trainer, we were proud to share with other actors in the criminal justice chain, the values and beliefs that we now hold. This includes the obligation and need to respect human rights at all stages of criminal proceedings relating to terrorism."

UNODC's train-the-trainers approach contributes to the achievement of the United Nations Sustainable Development Goals, particularly Goal 16.a, which calls for strengthening national institutions, including through international cooperation, by building capacities at all levels to prevent violence and combat terrorism and crime.

To further strengthen the sustainability of the training, UNODC and national experts from Burkina Faso and Cameroon are preparing training materials which customize UNODC's Training Module on Human Rights and Criminal Justice Responses to Terrorism to their national context.