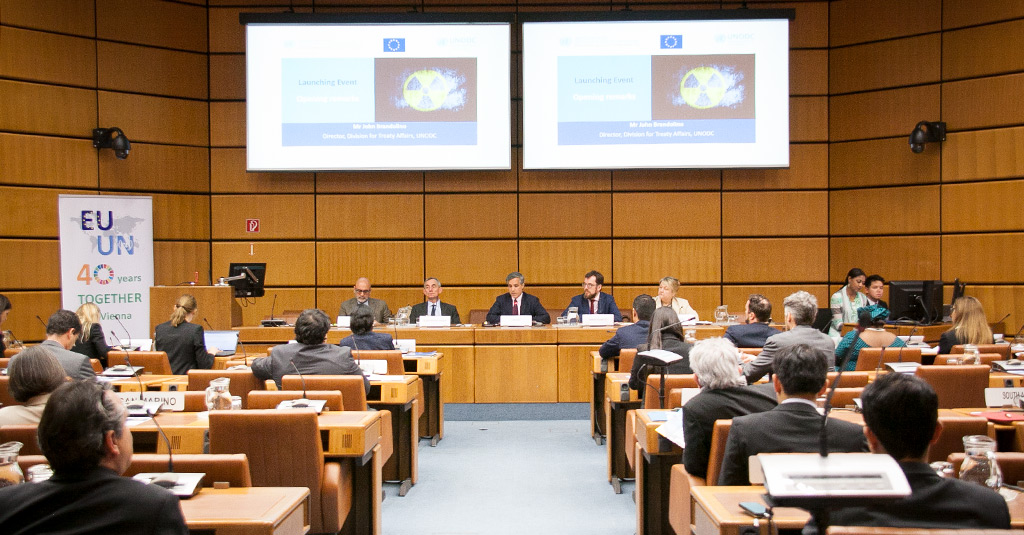 On 27 May 2019 in Vienna, UNODC's Terrorism Prevention Branch hosted an event to launch the joint UNODC-UNOCT/UNCCT project, financed by the European Union, aimed at preventing acts of nuclear terrorism through the promotion of universalization and effective implementation of the International Convention for the Suppression of Acts of Nuclear Terrorism (ICSANT). Universal adherence to this key legal instrument remains an essential goal as it facilitates international cooperation, including exchange of information on nuclear security threats, as well as prosecution and extradition of suspects. To date, ICSANT has 115 parties.

The event highlighted the activities foreseen under the project and invited Member States to familiarize themselves with the technical assistance offered under the three-year project. In addition to representatives from the European Union, UNODC and UNOCT and its Counter Terrorism Centre, participants from Canada, Nigeria, the International Atomic Energy Agency, the 1540 Committee Group of Experts, the United Nations Office for Disarmament Affairs, the Inter-Parliamentary Union and the Vienna Center for Disarmament and Non-Proliferation also contributed to the event by highlighting their work relevant to the promotion of ICSANT.

H.E. Ambassador Didier Lenoir of the delegation of the European Union to the International Organizations in Vienna noted that "building on our nuclear security engagement so far we decided to entrust the UNODC in Vienna and UNCCT in New York with promoting the universalization and effective implementation of the ICSANT. We believe that the Convention is a valuable element of the global nuclear security and anti-terrorism architecture."